Leyna Bloom wants you to see her — not just the curves she displays for the camera but the firm sense of purpose under her skin. She is about to get her wish on an unlikely stage: as the first transgender woman of color to be featured in the Sports Illustrated swimsuit issue.

The occasion is a pivot point. In enlisting Ms. Bloom, who is Black and Filipino, Sports Illustrated intends to signal a continuing engagement with social issues. (It featured another transgender model, Valentina Sampaio, last year.)

For Ms. Bloom, it is a platform for activism and, with it, representation for her less visible, often embattled trans sisterhood. It is also a new phase in a journey that has taken her from the predominantly Black South Side of Chicago, to the underground ballroom scenes of Philadelphia and New York, to the highest echelons of fashion and film.

She has walked the Tommy Hilfiger runway alongside Zendaya and Grace Jones; modeled for H&M; been featured in Vogue India; and appeared in a Levi’s ad campaign, as part of a series that also includedNaomi Osaka. She also starred as a transgender woman in “Port Authority,” an indie drama screened at the Cannes Film Festival.

There were plenty of hurdles along the way. In a telephone interview this month Ms. Bloom, who declined to give her age, talked about beauty, the abuse she suffered as a child and her superhero powers. 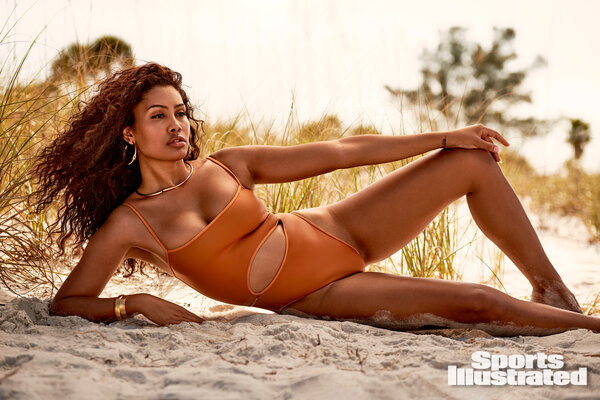 When did you learn you would be in Sports Illustrated?

I was on the set for my Levi’s campaign in December. I hadn’t gone to a casting, so when my agent called with the news, I felt mentally shaken. The idea that they were giving me this chance — I couldn’t take it in. Two weeks later I was on set.

When we did the shoot, I told them: no bikinis, no strings, no thongs, no nudity. I was going to wear a one piece, that’s what I feel most comfortable in. We shot 12 suits that day — some flirty, some sexy, some really strong. Each one captured a different part of me.

What do you hope viewers will see?

My autonomy and my anatomy are beautiful. I want people to see that, and to see that you can be respected, appreciated and loved regardless of your body shape, sexuality and the color of your skin.

Is the S.I. swimsuit issue, which has long been criticized for reinforcing gender stereotypes, the best vehicle for that?

It’s one way. This is a way of reaching the top of the food chain. Let’s at least have this moment and say that we had it, and then we can go on to dismantle it.

What about critics who say that you are promoting stereotypes?

You have talked about wanting to be a Victoria’s Secret model and a Disney princess. Why?

Up to now, it was strictly, “Oh, you’re trans so you cannot be a princess.” But when we’re seen in these spaces — the runways, the magazines — trans children can look up and say, “This is what a princess looks like to me.”

As a child, who did you look up to?

There was no one really captivating, so I took pieces from the people close to me. My great- grandmother, my grandmother, my father — they inspired me. My dad always made sure that I knew I was special. He taught me to see that I’m a maker of art.

What is it tough growing up trans on the South Side?

My sexuality is the reason I survived in society. I think of it as an art form. I think of myself as a third sex. As I’ve grown older, I’ve become more in tune with both my masculine and feminine energies.

But it hasn’t been easy. I was raped when I was a child. I’ve dealt with being fetishized my entire life. It’s important to understand that trans women have been fetishized, that some of them chose to be sex workers because that was the only way they could survive.

Tough lessons. Did your childhood have a brighter side?

Growing up, I wanted to be an astronaut. I wanted to be a national hero. I wanted to go into space. I thought, OK, maybe I won’t be working at NASA, but at least I can go there in my mind or inspire the next person to work there. When I think of an astronaut, I’m thinking of superheroes like Wonder Woman, Superman and all these new mythological creatures that have special powers.

Do you think of yourself as heroic?

I think I’m revolutionary. I relate to X-Men but even with X-Men, some people hate you because you’re unique.

Superheroes are often portrayed as alien. Do you relate?

My favorite movie growing up was “The Fifth Element.” That film completely changed my life. There’s a scene where there are beings beyond human evolution, much stronger than humans. I found that so liberating.

This interview has been edited for length and clarity.