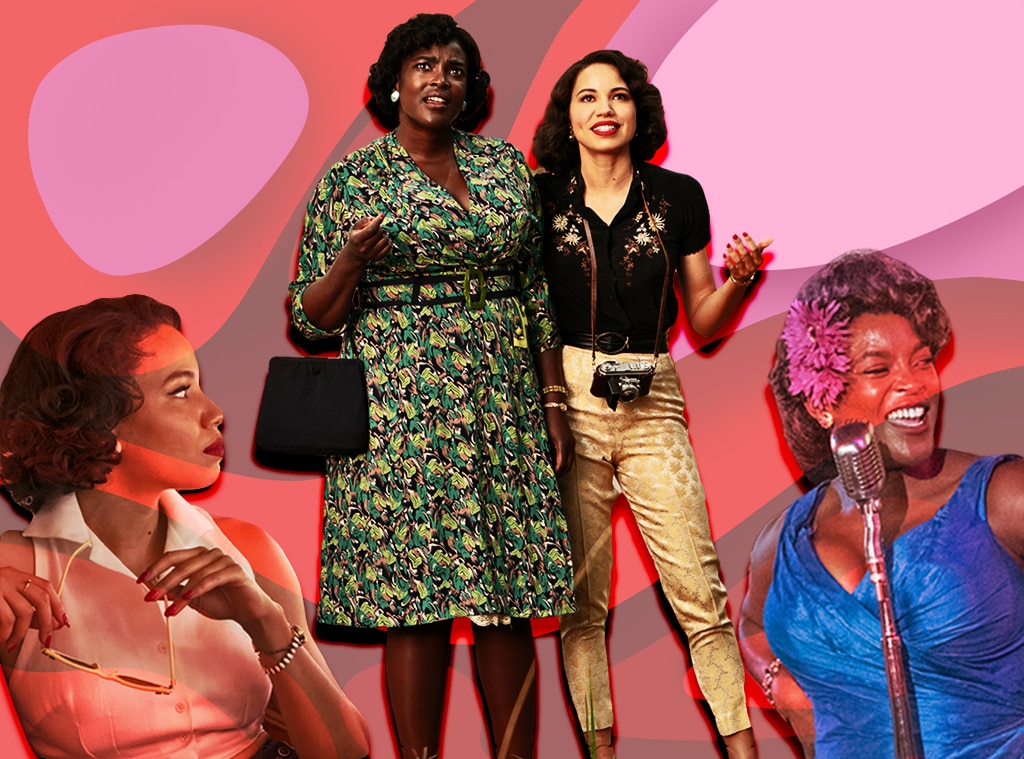 Thanks to one simple shirt, Lovecraft Country's dreamy wardrobe was born.

If you have been tuning in to Misha Green's supernatural horror series on HBO, you know the show is no casual watch. The anthology series, which hones in on the supernatural experiences of a Black family in 1950s Jim Crow America, can be exciting, moving, puzzling and downright horrifying with each passing twist and turn. But, there is something about the show that won't make you want to cover your eyes—and that's the clothes.

With Dayna Pink at the helm of the costume design, the show visually transports us back to the colorful, glamorous dress of the 1950s in fresh ways, all while against the nightmarish backdrop of the period.

"[I was] lucky enough that I didn't have to keep to the letter of exactly what that period was we had—because this is a fantasy in a way," Pink told E! News exclusively. "There's [a] fantastical element to it, so I got to add that with what I was doing."

Given the otherworldly plot, Pink could break the fashion rules of history. "I got to take the real silhouettes and the real pieces and then add fashion to that, so sometimes I would take a shape of something from that time and then build it out of a modern fabric," she explained. "The colors and the fabrics and the prints of that time maybe were a little different, so I got to mix it up, which was what was so creative and fun about doing the show." As Pink put it, she and her team got to "take this period and sort of stand it on its head."

One fateful moment in particular unexpectedly set the tone for all the costumes to come. "The first piece that I found for the show was a T-shirt that was at Western Costume, which was Atticus' T-shirt that he wears when you first meet him," Pink recalled. "Everything about that T-shirt reads period. The color was soft and creamy and dreamy and beautiful and it was like, you knew that it wasn't a modern T-shirt by looking at it…I was like this is the show right here and it was a one simple T-shirt that I sprung the entire show off of."

Charles Haeger Found Dead After Suspected of Killing His Ex-Girlfriend

Amanda Bynes Returns to Instagram With a Dramatic New Makeover

For all the details on Lovecraft Country's standout costumes, keep scrolling!

One of the standout fashion moments of the series came early thanks to Leti's show-stopping deep teal party outfit adorned in fringe. She wears this look as she dominates the dance floor and as she smashes the windshields of cars, whose owners were tormenting her party guests outside. "The dress was one of my favorites for sure because that was literally in my head the moment that I read it," Pink told E! News. While the skirt-dress hybrid started off a different color and morphed over the course of five fittings, Leti's actions—dancing, hitting cars with a bat and then getting down on the ground to surrender to police—helped inform the ultimate look.

"Because of what she had to do in it," Pink said, "we had to make it almost like a wrap so she could really have a lot of movement in it. So, the design morphs as the action morphs." From the start, however, the fringe was an intentional choice to amplify her every move. "The moment is when she holds that bat and she's walking," Pink said. "There's the fashion, there's the movement, there's the sexiness and then she's doing something very serious and very powerful…It couldn't be funny…It had to be really serious and it had to sort of support what she was doing."

As fans of the show know well by now, the plot is as gritty as the costumes are stylish. Given the characters' winding, unpredictable adventures, their clothes face some severe—and often supernatural—elements, adding an extra challenge to the costuming process. "When they were in the woods in the pilot, I'm sure [Jurnee Smollett] had 10 of those [outfits]," Pink said. "That's another reason that we couldn't just use vintage clothes because there's no such thing as getting 10 of the same thing, so that's why we made it all."

As for the mysterious and questionable Christina Braithwhite (Abbey Lee Kershaw), Pink's costume design helped fuel the character's lacking approachability. "I want you to not want to touch her," she said. "I want you to be attracted to her and you can't take your eyes off her, but she's a little crispier." Pink also pointed out a pokey bird pin Christina wears in the second episode. "There's a sharpness to the pin, her jewelry and stuff," Pink described. "There are edges to Christina."

Like Christina's pin, Pink used subtle details to not only complete the costumes, but also support the identity of the characters wearing them. For example, she used soft materials and shapes to evoke the approachability of the characters Leti and Atticus. "With Leti," she pointed out, "the fringe dress, you want to run your fingers through it." Pink noted a golden cotton short-sleeved shirt Atticus sports has a similar effect. "That was my goal," Pink said. "I want them all to be very touchable and very kind of approachable in this way. There's a softness to them." Those details extend even to the prints Pink picked out. "The fabric that I used to make Leti's equestrian shirt—the pattern is round and it flows," she said. "The fabric flows."

Sometimes costumes don't only serve the fantasy of the show, but also of the characters themselves. Such was the case with Leti, who arrives back in Chicago with her most fashionable foot forward, despite being without a home and job. "We wanted to have her look exactly like she wants you to think she looks," Pink said of the intention behind Leti's costumes. "She shows up in town and she is presenting herself in this way and so, we helped to support that vision…It doesn't really matter where did she get those clothes. Normally that's a really important thing—how could she afford those clothes? But, with someone like Leti, she just gets what she wants." As a result, "We were able to just kind of really play and give her pieces that were really glamorous and really amazing because she would have gotten those somehow," Pink said.

While Leti is certainly a fashionista of the story, her half-sister Ruby is just as stylish from the moment viewers first see her singing to a crowd in a vibrant blue dress. "My whole goal for her dress for the beginning was like, 'I just want you to walk out there and feel like all eyes are on you.' And I think we did that," Pink said.

As viewers can attest, Ruby's custom-made wardrobe seldom stopped being stellar, including a show-stopping sequined dress from episode four. "We just leaned in to all the colors and the shapes of that time," Pink said, noting they kept her outfits very fitted. "I was like sexy, sexy, sexy, let's go."