A MUM revealed she tattooed her twin son so she could tell him apart from his brother, but claims her mother-in-law ‘lost her s***t’ when she found out.

The 31-year-old explained that she and her husband had been trying for a baby for five years, and they were finally blessed with fraternal twins, Adam and Jack. 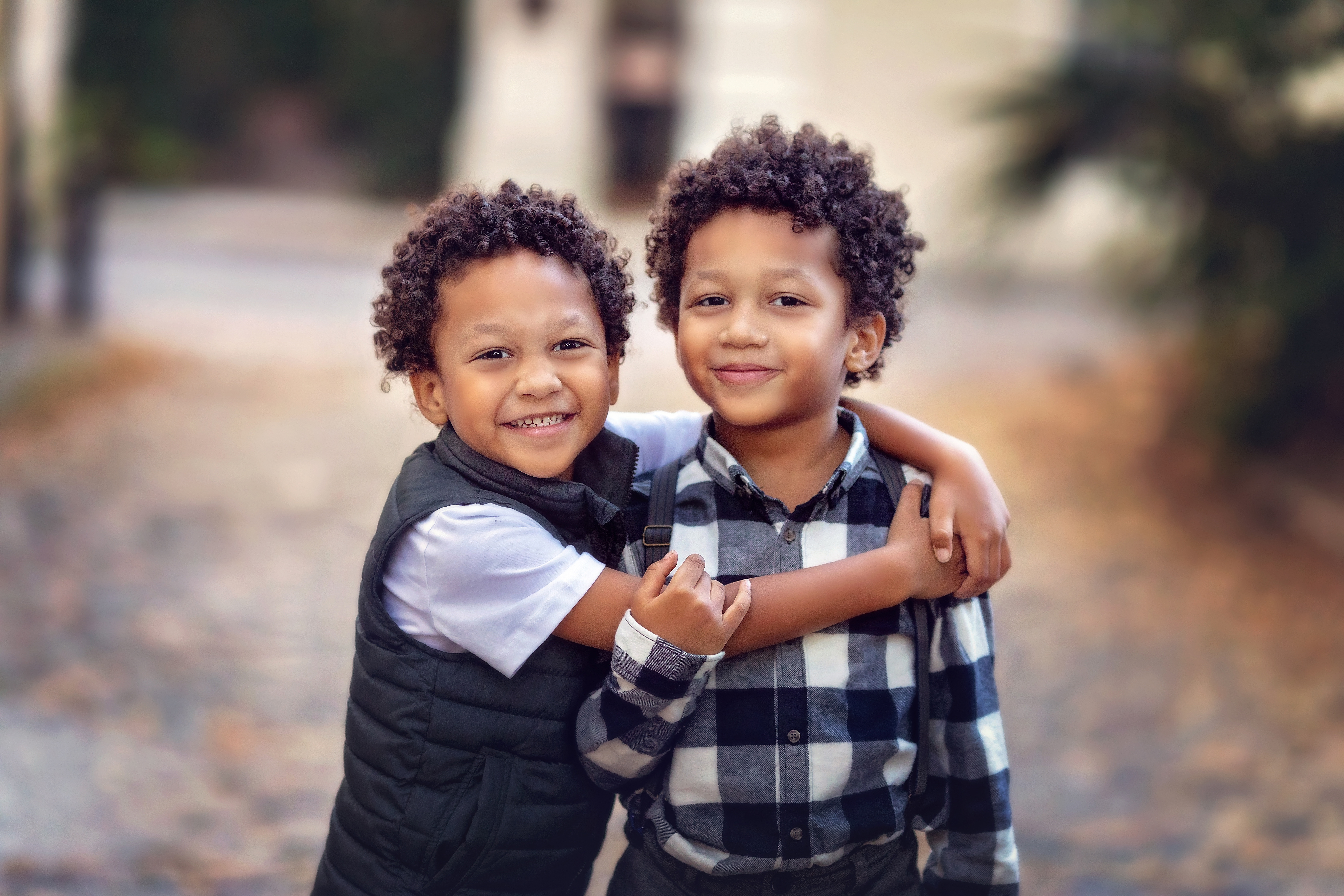 But the mum explained Jake has a ‘condition’, and requires an injection once a week, which he’ll be able to manage with pills when he’s older.

When the mum went back to work, she revealed her mother-in-law looked after the boys from nine up until 16-months-old.

She said her partner’s mum was happy with giving Jack the shot, until one day when it all went wrong.

The mum shared her dilemma to Reddit, saying: “Worked very well until a month ago when she gave the shot to the wrong kid.

He has a 2mm brown freckle on his earlobe

“Now they may be fraternal but they look identical. I'll be honest my husband and I even mix them up sometimes. Everyone does.

“She immediately noticed her mistake called 911 and they were transferred to hospital.

“By the time I got there Adam had been given the reversal agent and they were both happily sipping on juice loving the attention.”

While she reassured: “He was never in danger. It’s a very slow acting medication that, at worst, would have given him diarrhoea in a few days. MIL was beside herself.

“I tried to ease her worry but she refused to babysit so to daycare they went."

Now the mum, from America, says the nurse at the nursery was also worried about mixing up the boys, abut they refused to keep their name tags on.

After speaking to the doctor, they recommended tattooing Jack, so no one would mix them up.

The mum continued: “Doctor recommended a medical tattoo. Explained they tattoo a freckle, no bigger then the end of a pencil eraser, on an area of skin that's easily seen while the child is under mild sedation similar to dental offices. 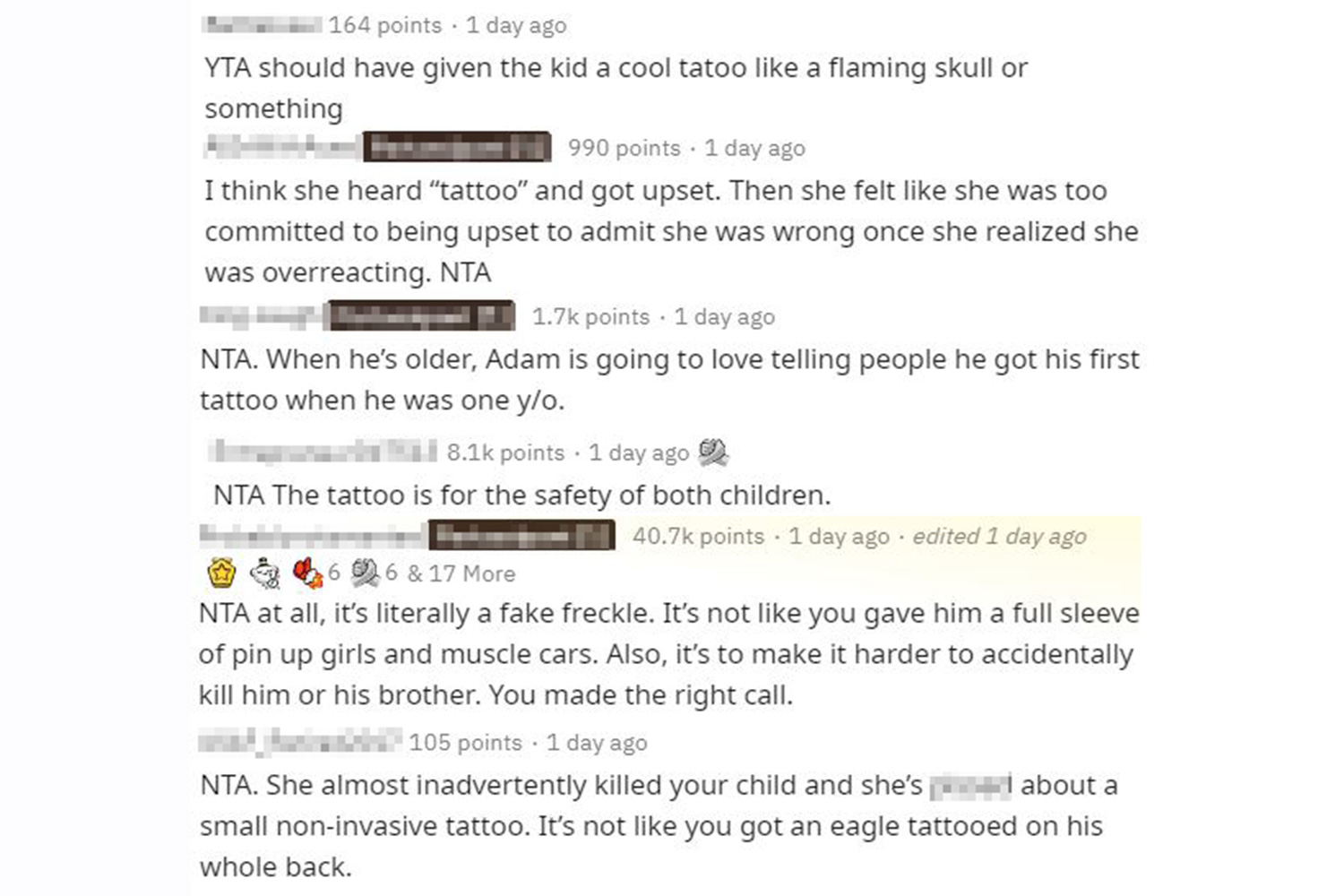 “Because of the area it usually fades in 2-3yrs but by then they should have developed more personal features and may not need it redone.”

After chatting about it with her husband, they decided to tattoo Jack, revealing: “He has a 2mm brown freckle on his earlobe. From entering the office to leaving it took 30 minutes. Never felt a thing.”

But as soon as her mother-in-law found, out she ‘lost her s**t’.

The mum said: “I tried to explain but she just freaked out so I put both kids on the floor and told her to pick up Jack and find the tattoo.

“She picked up Adam So I handed her Jack and after 20 minutes still couldn't find it. Stripped him to his skivvies.

They still think I went too far in tattooing my child

“I finally pointed it out and she went ‘That's just a freckle’ I just said… ‘My point exactly. Adam doesn't have a freckle there.. So that's how daycare can tell them apart'.

“She's still p****d and ranting. Once I explain to others and they fail to find it they understand but they still think I went too far in tattooing my child and altering their body.

“I believe I took the necessary precautions recommended by the doctor and the tattoo will fade with sun exposure and as he grows.

“By the time he's 5 it probably won't even be visible or it'll just look like a faded freckle.”

Despite receiving a backlash from friends and her mother-in-law, people reckon she did the right thing.

Her post has racked up more than 2,000 comments, with one person saying: “She almost inadvertently killed your child and she’s pissed about a small non-invasive tattoo. It’s not like you got an eagle tattooed on his whole back.”

Someone else wrote: “NTA at all, it’s literally a fake freckle. It’s not like you gave him a full sleeve of pin up girls and muscle cars. Also, it’s to make it harder to accidentally kill him or his brother. You made the right call.”

A third commented: “I’d rather tattoo my kids with Barney the dinosaur on their whole body than risk messing up medication.”

Someone else thought: “NTA. When he’s older, Adam is going to love telling people he got his first tattoo when he was one y/o.”

This person pointed out: “I think she heard ‘tattoo’ and got upset. Then she felt like she was too committed to being upset to admit she was wrong once she realized she was overreacting.”

While somebody else added: “YTA should have given the kid a cool tattoo like a flaming skull or something.”