WHEN Kirstie Webster's six-year-old son started suffering with tummy ache, doctors thought it was nothing more serious than constipation.

But after weeks of agony, they discovered Tommy, from Banstead, Surrey, had a tumour on his liver which had spread to his lungs. 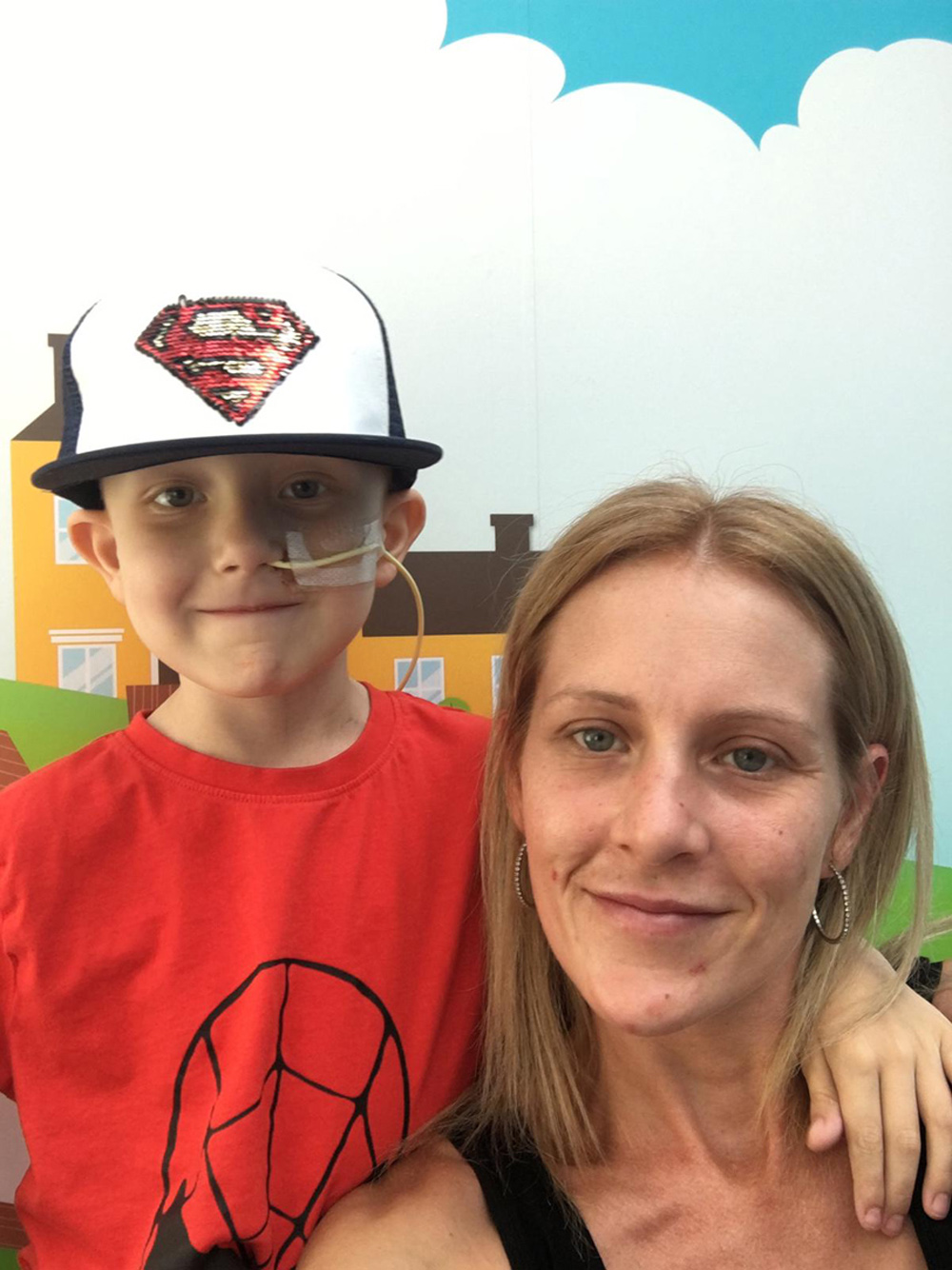 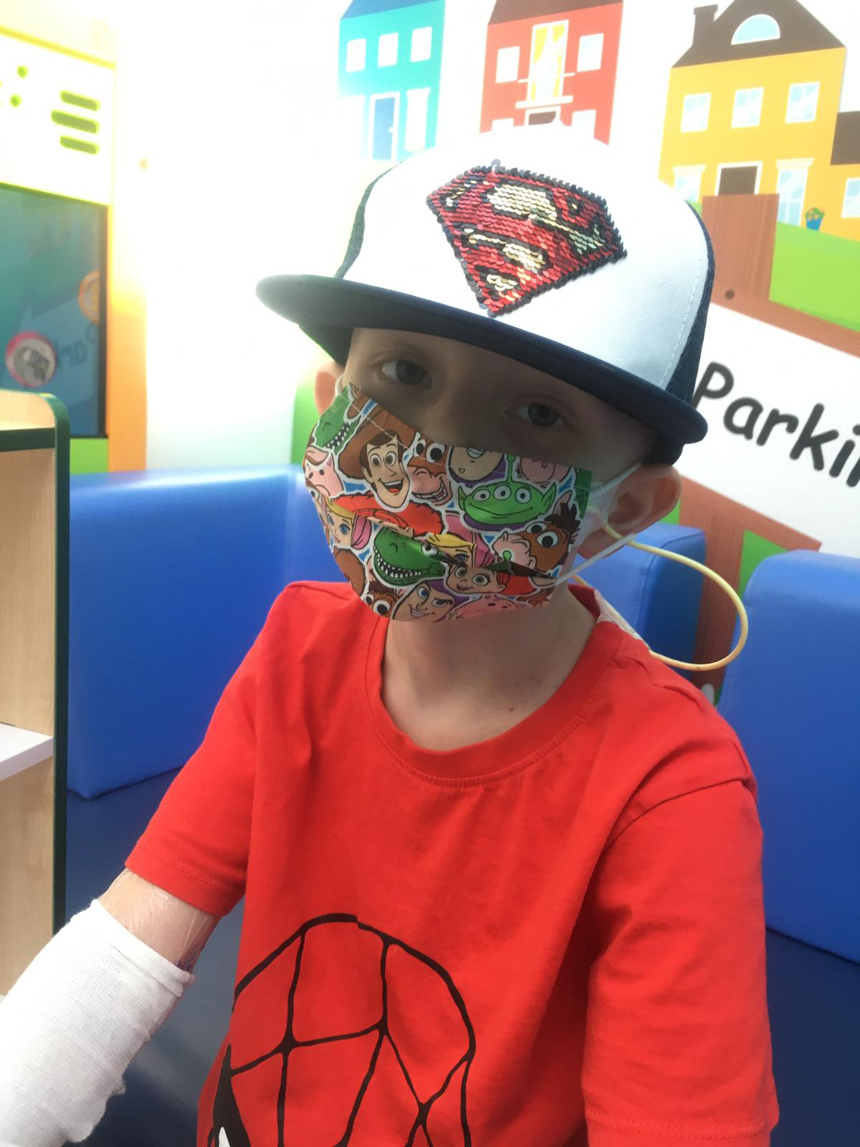 He was diagnosed with stage four hepatoblastoma, a rare cancer of the liver that affects children, last month.

He now faces months of gruelling chemotherapy – but only has a 50/50 chance of beating the disease.

Single mum Kirstie, 32, said Tommy first started complaining of a sore stomach in March, but at that point doctors didn't think it was anything to worry about.

She said: “I kept taking him to doctors but they said it was constipation and he was prescribed laxatives.

“At one point, I ended up taking him to A&E, because he was in so much pain, but they examined him and were sure it was constipation, so he was given more laxatives.”

After about eight weeks of going back and forth to the doctors, she was able to push for Tommy to have an ultrasound scan at the beginning of May.

“He was curled up in pain and I could see he wasn’t right. I knew there was something seriously wrong with him,” she said.

It was those words, ‘We’ve found something’. My world came to an end

Kirstie, a full-time mum, said: “They had found something on his ultrasound, in his liver, and after the CT scan they said it looked like it was cancer.

“It was those words, ‘We’ve found something’. My world came to an end.

"It was the worst day of my life, but Tommy was there with me and I knew I had to be strong for him." 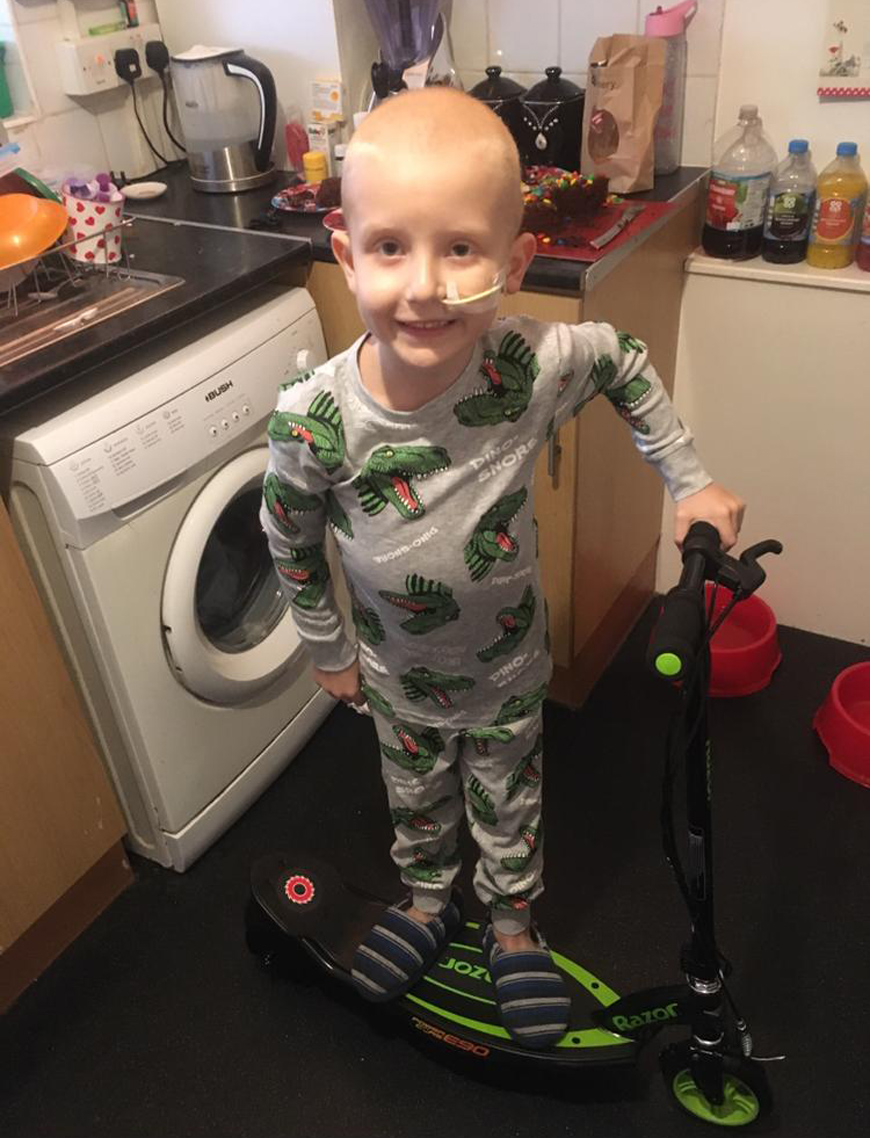 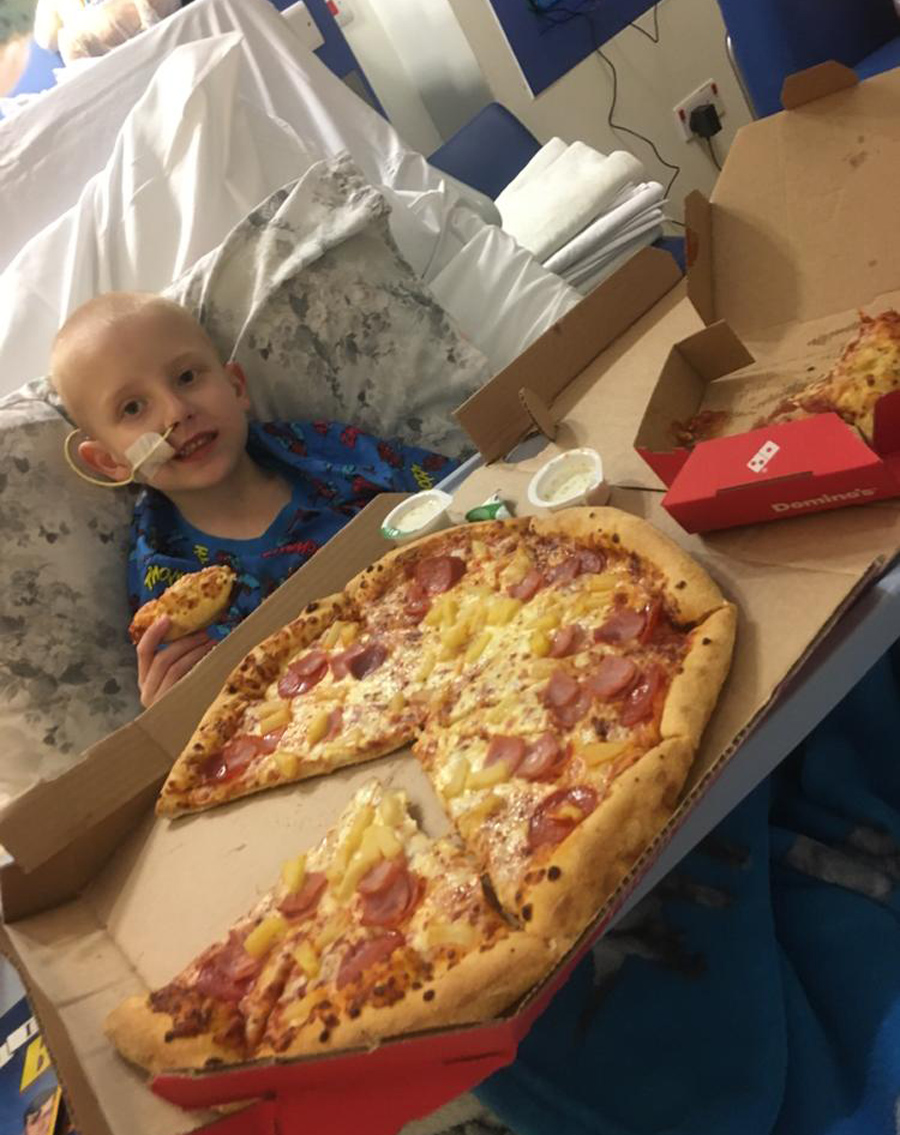 She said they had to wait a week for the results of a biopsy which confirmed there was a cancerous tumour on his liver and that it had spread to his lungs.

“It was stage four, an aggressive type of cancer. They said he has a 50 per cent chance of fighting it," she said.

Known as hepatoblastoma, it affects just 10 to 15 children a year, according to the Royal Marsden.

Tommy started chemotherapy just two days after being diagnosed but a couple of days later, he was rushed to intensive care at St George’s Hospital in Tooting, south west London, because his oxygen levels had dropped so low.

Staying there for a week, he started to improve and was transferred back to the Royal Marsden Hospital in west London to continue his chemotherapy.

Kirstie, who has two other children, Lexie, seven, and Teddy, two, said: “Tommy knew he wasn’t well because of his tummy and he kept saying, ‘I can’t wait until I can run and play again'.

“He had never spent a night away from his siblings before.

"They are so close and that was one of the hardest things for them all. They couldn’t visit him in hospital because of Covid-19.” 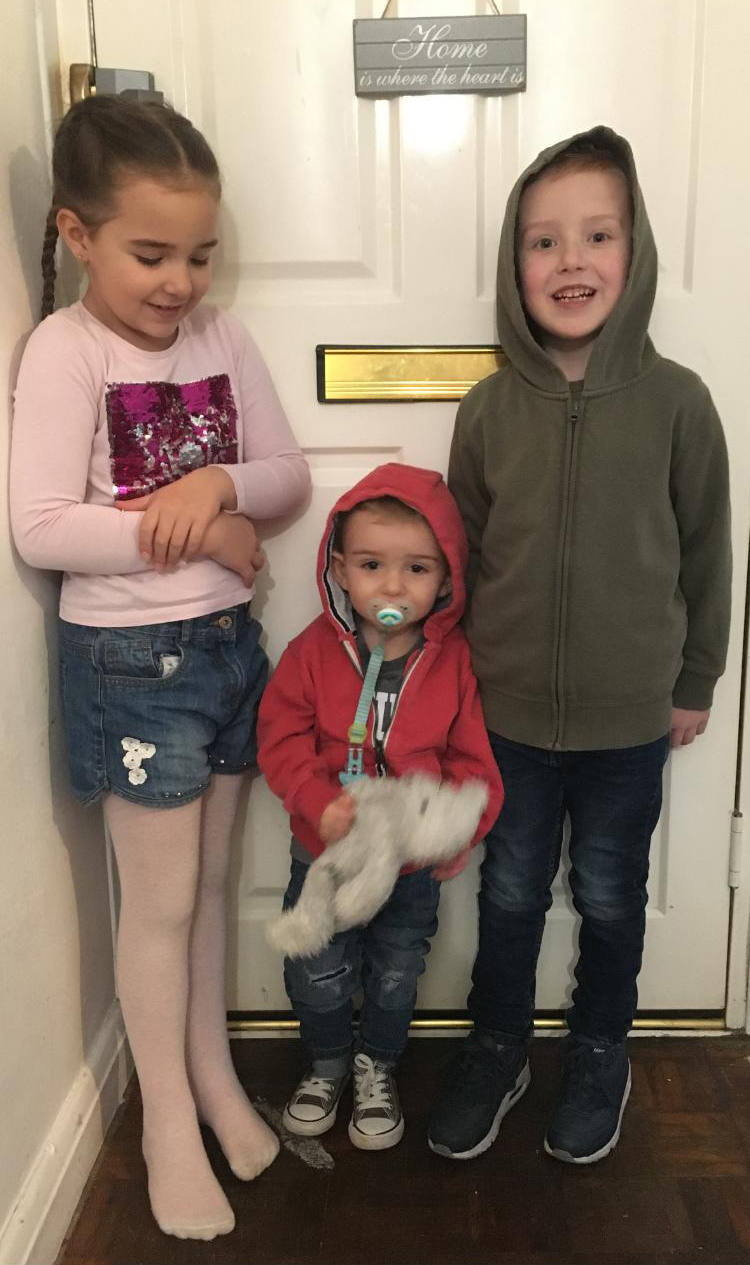 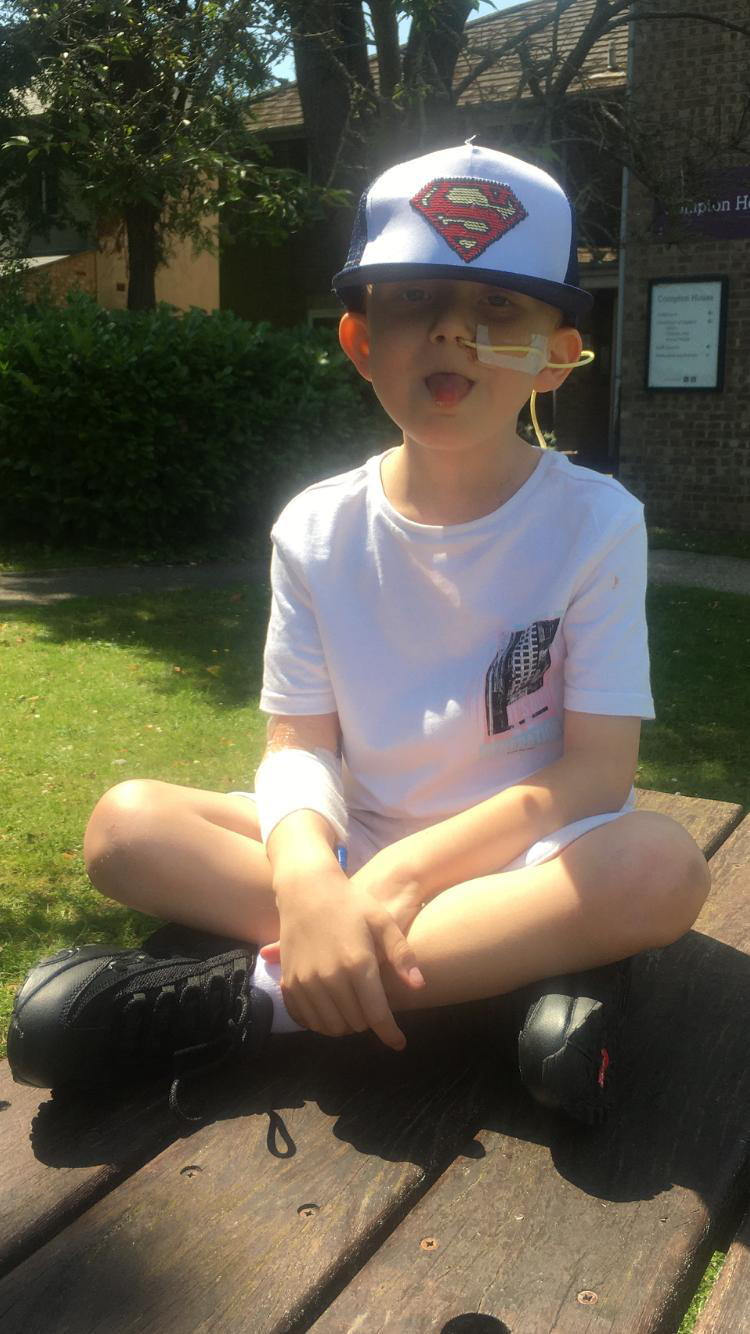 Eventually, after a few weeks in hospital, Tommy was finally allowed home to see his siblings on June 18 – his sixth birthday.

“He loved spending time with Lexie and Teddy – they adore each other and this has affected them all," Kirstie said.

"We had been having such a lovely lockdown together as a family. I know it’s been tough for a lot of people, but we were really enjoying spending time together and then this happened.

“It feels like my family has been torn apart."

Tommy will now receive chemotherapy through a line for the next seven to nine months and return to hospital for treatment as an outpatient.

Kirstie said: “We’ve got a long road ahead of us. He will have chemotherapy for months and then it’s possible he will need an operation and even a liver transplant.”

She decided to shave Tommy’s hair before the treatment started, rather than watching it fall out, and says that despite everything her brave boy is still smiling.

“He’s the happiest boy ever. He’s still trying to do everything he can. He's even still riding his scooter around,” she said. 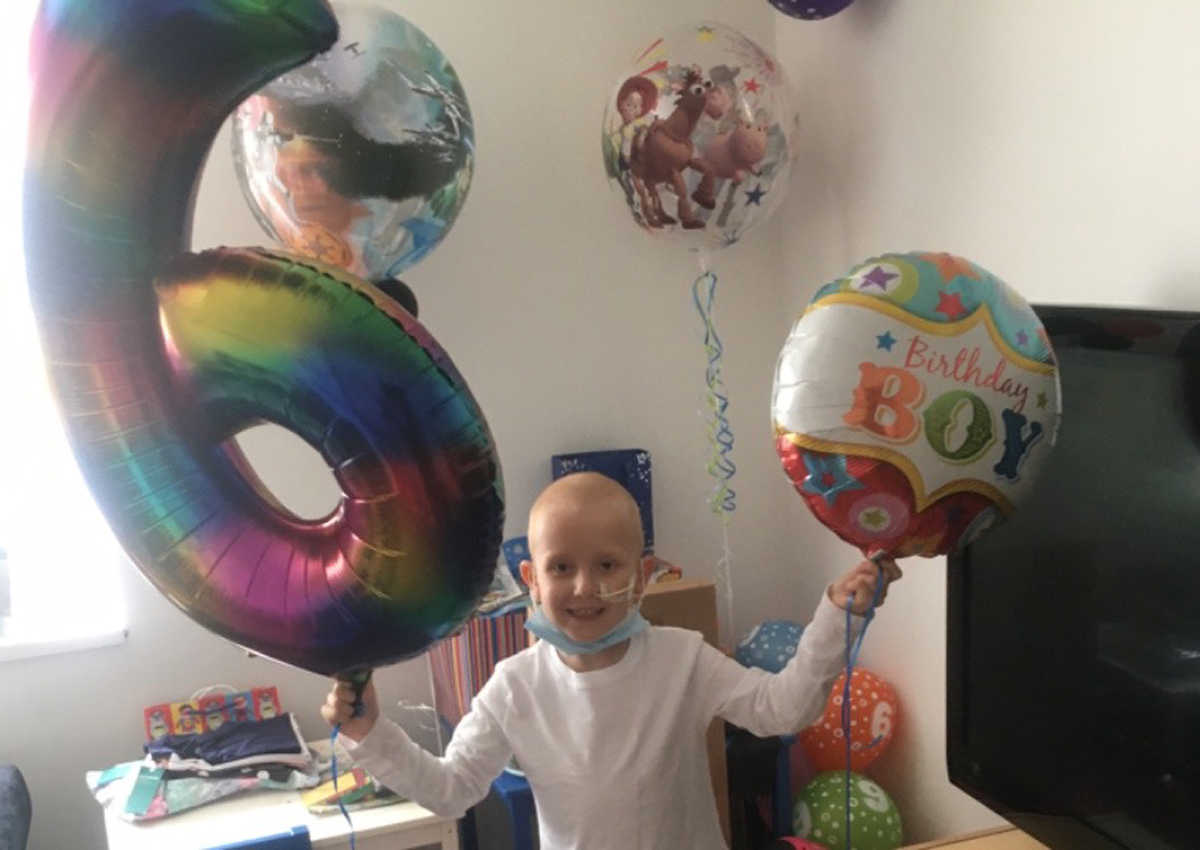 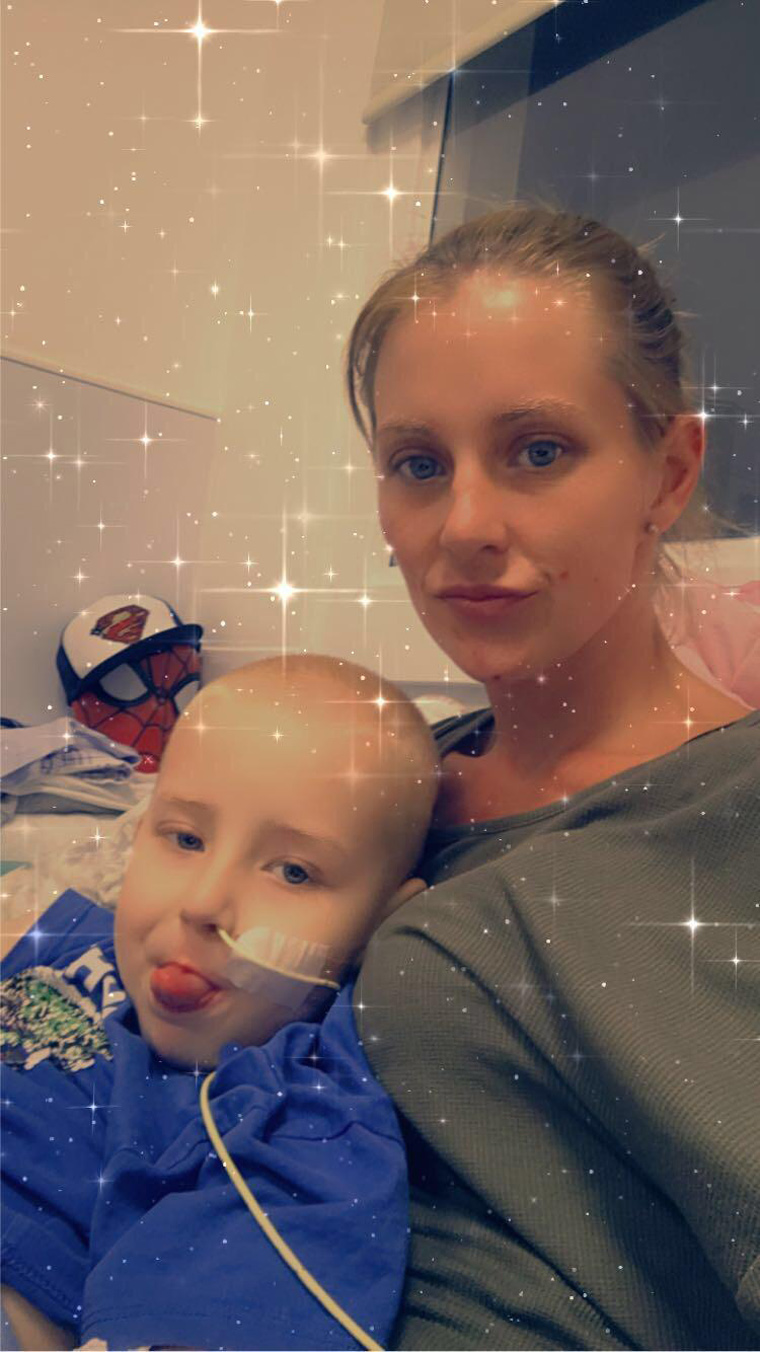 “The chemo did make him a little sick at the beginning, but it mainly makes him tired. He doesn’t have as much energy as he used to.

“I have always been on my own with the children, but this has been the hardest time and I’ve had to reach out to my family to help.

"I’ve had to rely on other people, but I have a strong community around me which I’m grateful for.

Hepatoblastoma is a cancerous tumour of the liver which usually occurs in young children.

It usually presents as a lump in the tummy, but other symptoms include:

Tests are carried out to find out as much as possible about the type, position and size of the tumour. This will determine the type of treatment needed.

The prognosis depends on the risk group of the tumour, but many children with hepatoblastoma are cured.

“I have every hope for my little boy. I can’t bear to look at it any other way. I’ll be beside him 100 per cent of the way and I know he has the strength in his body to overcome this terrible disease.

“He has adapted to life with his wiggly, the line for his chemotherapy, and a feeding tube.

“I keep thinking we have to let the storm pass before the rainbow will appear." 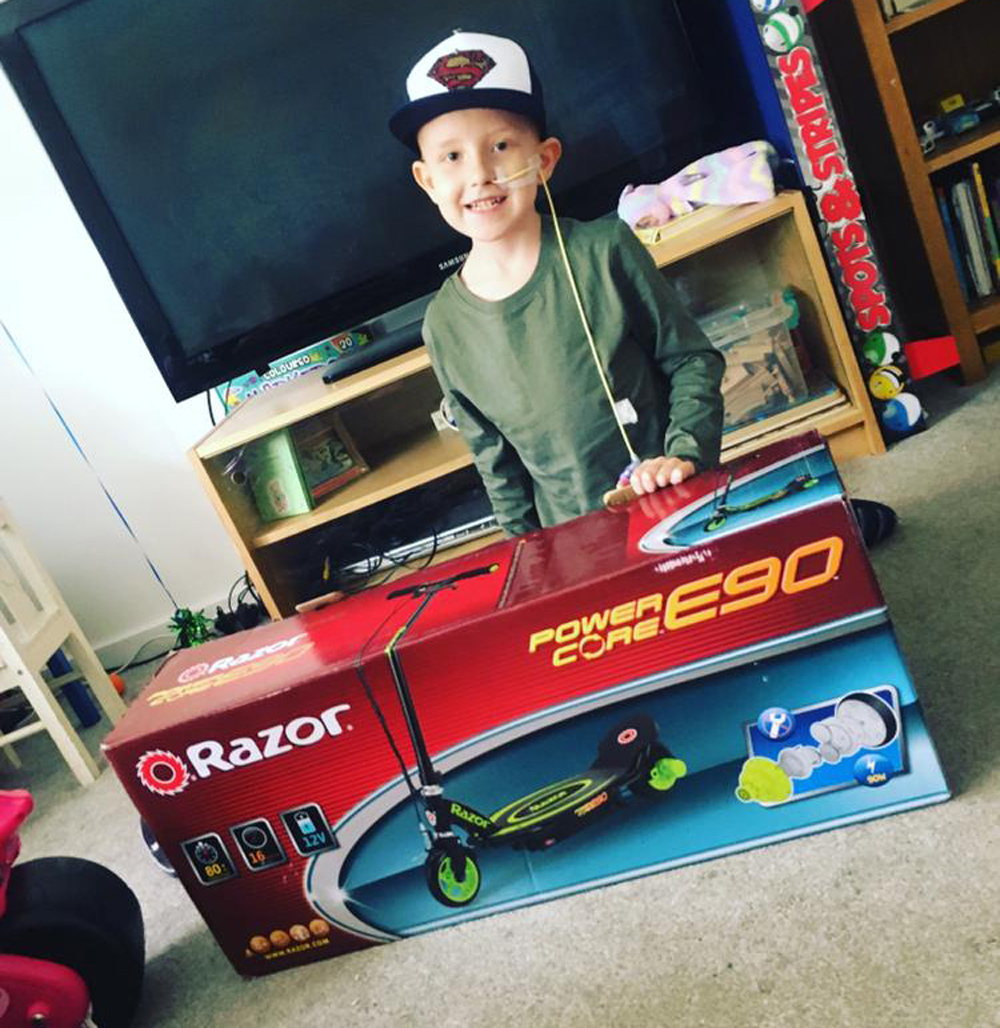 Kirstie is now asking strangers to help make her boy's dream of visiting Disney World come true and has set up a GoFundMe appeal, which has already raised £7,000 towards making his dreams a reality.

She said: “When he is well enough and we are able to travel, I want to take him to take him to Disney World, as he wants to meet The Hulk and Beauty and the Beast.

“I want to keep a smile on his face and give him the things he wants, as an incentive to keep going and to make his life that little bit easier.”