HANGING around the sports centre while her mum Cicely did an exercise class, Michelle Griffith-Robinson was like any other 12-year-old: bored and in desperate search of some fun.

To keep her occupied, her mum handed her a £1 coin and told her to join the running group – and Michelle’s life was changed forever. 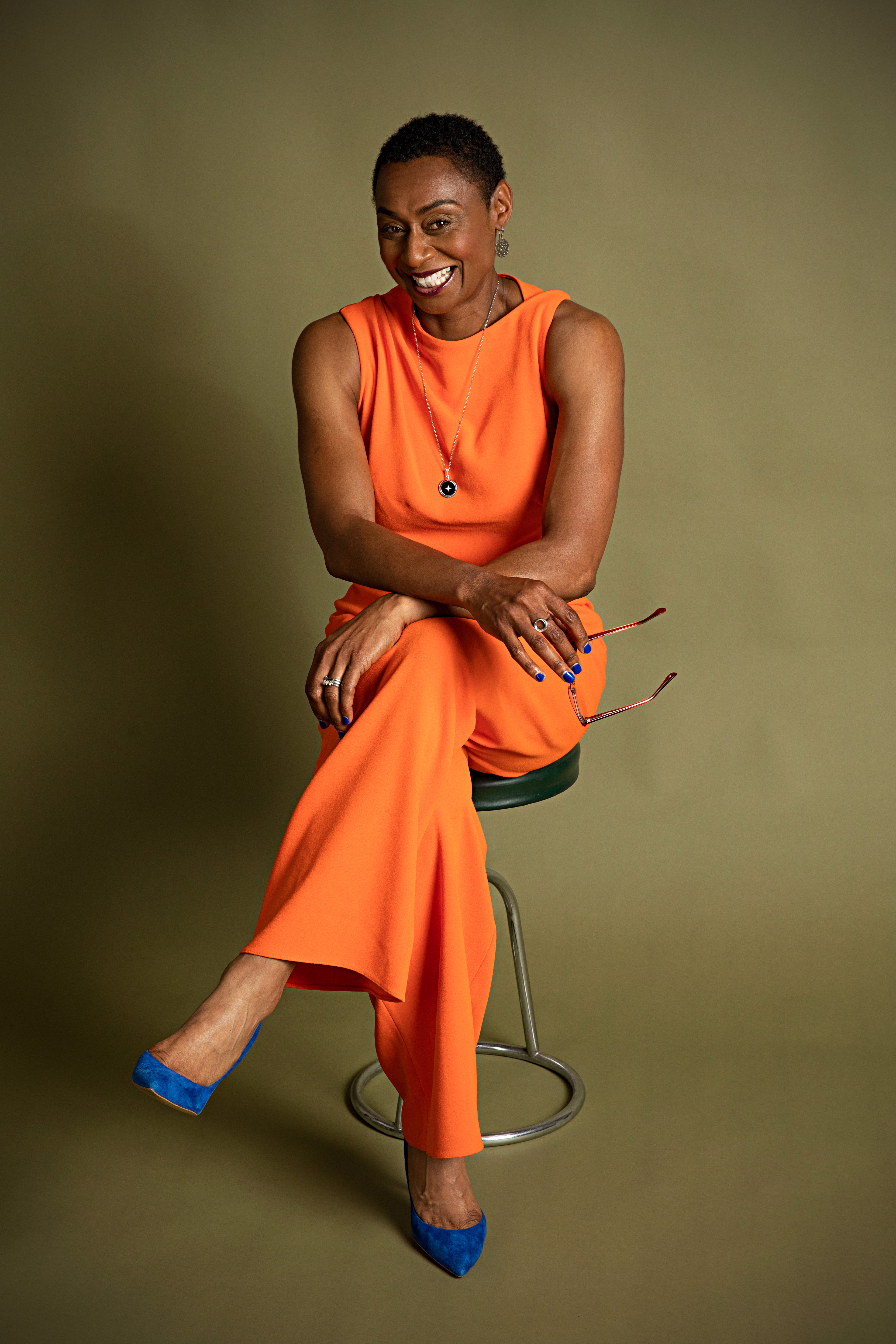 A decade later, the now-retired triple jumper made history as the first-ever woman to jump more than 14 metres – a distance just shy of the length of a London bus – at the 1994 British Championships in Sheffield.

Two years after that, she would represent Great Britain at the 1996 Olympics in Atlanta.

But, that day, such athletic glory all depended on £1. “My mum was working out along to the song Rock The Boat, and she could see I was so bored,” says Michelle, now 49, to Fabulous. “That was the best money she ever invested – I was hooked.”

Thereafter, her life was set – quite literally – onto a different track. She started going to athletics training up to three times a week – often staying late after sessions chatting and bantering with the other kids who shared the same passion for physical activity.

It didn’t matter what background you came from – what you had, or what you didn’t have – we all just wanted to do sport

“It didn’t matter what background you came from – what you had, or what you didn’t have – we all just wanted to do sport,” she says, noting how track and field remains one of the few particularly diverse sports because its affordability means there’s almost no barriers to access. “You’re being judged on nothing aside from your performance that day.”

It was there that she met her best friend, and fellow triple jumper, Caroline Stead, who is also 49. “She was white and I was Black – both from working class homes with very different cultures, but one love of sport,” recalls Michelle, adding that the pair are still just as close 30 years later.

“Her dad Mick, who has since passed away, took me to training. I wouldn’t be where I am in my career without him.”

Sport also provided a safe space from a turbulent home life. “Growing up wasn’t plan-sailing,” says Michelle. “Training became my happy place – and the track provided a haven for me to go to where I could clear my head and switch off from everything going on.”

Her parents divorced when she was 16 years old – and around the same time she started allowing herself to dream big, finding herself increasingly leaps and bounds ahead of her peers. “Early on I was getting results during coaching, and was always encouraged to keep going at school by my PE teachers who recognised that I was very good,” she says.

As she naturally progressed through the competition levels – and into a professional career – she set her sights high, thinking: “This Black girl from a humble, broken home could really go all the way to the Olympics.”

But there were many personal sacrifices Michelle had to make along the way. She vividly remembers a five-day geography field trip to Snowdonia that she had to forgo because it would have meant missing two days of training.

“My school friends would call me boring because I’d skip socialising to go to the gym or track, and parties were unheard of – I didn’t drink until I was in my late 20s,” she remembers. “But sport was an integral part of my life, and I’d one day discover that there’s no better party than an Olympic party.”

In many ways, overcoming hurdles made her eventual achievements all the more special. She grappled with injuries while also making it to three World Championship Finals and European Finals.

Then, just before her long-awaited Olympic hopes were to be realised in Atlanta in 1996, Michelle received an anonymous letter in the post.

“I opened it to see the writing littered with expletives and the ‘N word’,” she recalls. “They told me I was nothing, that Black people like me shouldn’t be wearing the Team GB kit. I thought, ‘what an absolute a*******’ and tore up the paper.”

She was encouraged by UK Athletics to respond to the letter in a piece for a newspaper, in which she explained that she feels proud to be British and knows she has done more to represent this country than they ever will. "

Speaking about the racist abuse experienced recently by England football players, Michelle added: "It shows there's still such a long way for us to go – even after all that has been done in the media and in companies on racial equality, diversity and education – in understanding deep-rooted systemic racism. My father passed away not long ago, and the treatment he received when he first came to this country in the 1960s is still what is happening to Black people now."

When she stepped out at the Games shortly after her own encounter, she didn’t allow racist abuse to cloud everything she had worked so hard for. “I walked out into the stadium wearing my GB tracksuit like a peacock, and cast the words of this small-minded person from my mind,” she says. “Instead, I reflected on my journey – the blood, sweat and tears – over the past 12 years. It was such a pinch-me moment.”

I reflected on my journey – the blood, sweat and tears – over the past 12 years

Michelle notes that while there are undercurrents of racism in her sport, it’s routinely stamped out simply by the nature of track and field. “It’s objective, so it’s very hard to be blatantly discriminatory,” she says. Because if an athlete is fast enough – or jumps the distance – then they will get through, no matter the colour of their skin.

But not all other sports have such a level playing field. “Cricket and rugby are still so predominantly white and middle class because they cost so much money to participate in,” points out Michelle, who is married to Matthew Robinson, 48, the former Welsh international rugby union player.

It was a lack of diversity she became particularly aware of as a mother to three children of her own – daughters Reese, 17, and Eden, 14, as well as son Elijah, seven. “Not a lot of Black girls do swimming because the hats aren’t designed for their hair and there haven’t always been the right products available,” she explains, of the lack of post-pool afro haircare.

Michelle, who is now a life coach and mentor, hopes that she can provide inspiration as a confident Black woman who has competed at elite level to not only her own children – her daughter Eden is already showing Olympic promise in track and field, and wants to make it to the 2028 Games – but also those she mentors. “Sport has empowered me, given me a wealth of experience and taught me how to dust myself off and pick myself back up again,” she says. “It’s a baton of knowledge and skills that I want to pass onto the next generation. Plus, the message that it’s about so much more than just winning.”

Sport has empowered me, given me a wealth of experience

Just like Michelle’s own mum, Cicely, who worked as an NHS nurse for 25 years. “I grew up with her being exceptionally active – doing her Jane Fonda-style keep-fit classes in the 1980s,” she says. “She’s now 81 and is still where I get my energy and purpose from. She’s my hero.”

Michelle stepped back in 2006 from being a pro-athlete after 15 years at the top – but remains as active as ever. During the pandemic, she trained online with her friends doing circuits three times a week. “I have been focusing on my strength work, as I’m perimenopausal and want to reduce my osteoporosis risk,” she explains. “I’ve also been adding in reformer Pilates.”

It’s only now, when she looks back, that it has all really started to sink in. “A little Black girl from Wembley like me made it to the Olympics, competing on the world stage in front of 90,000 people,” she says. “Would I turn back the clock from walking onto that track at 12? Absolutely not.”

Michelle Griffith-Robinson is an ambassador for The Menopause Charity, Diabetes UK, Kit Heath Jewellery and Women’s Aid. Follow her on Instagram 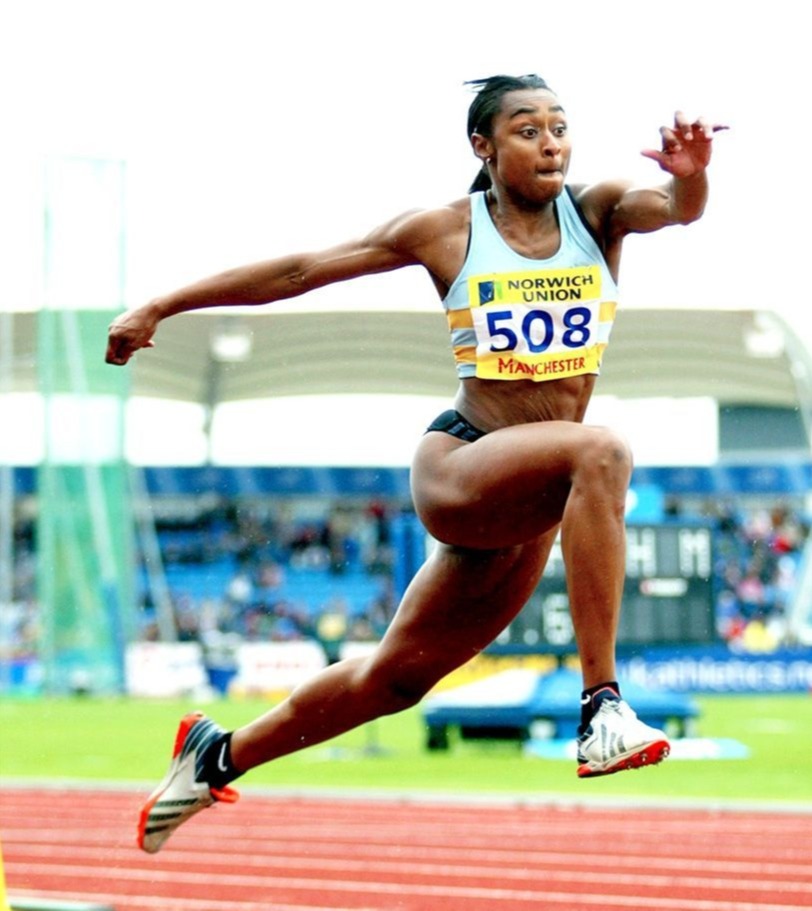 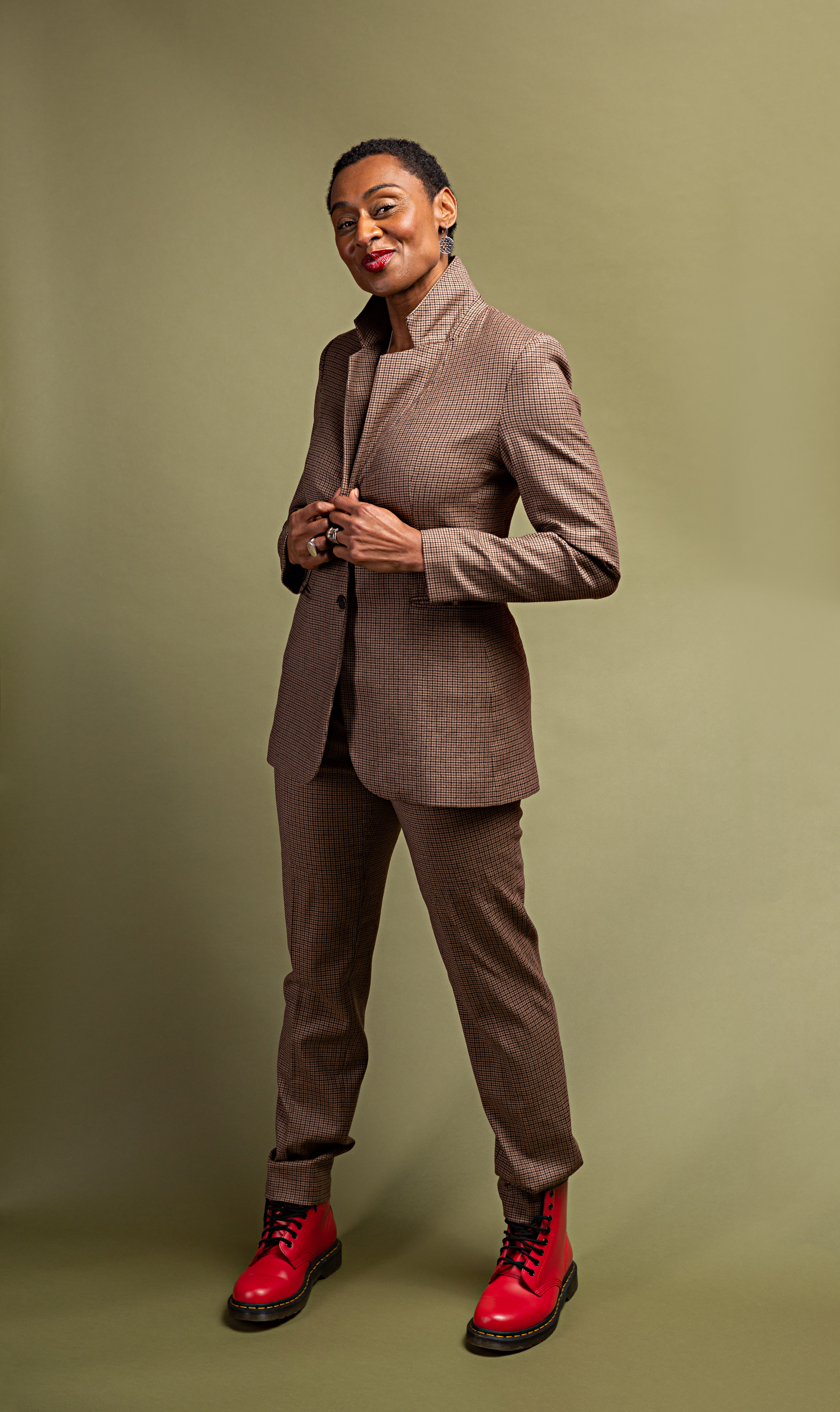 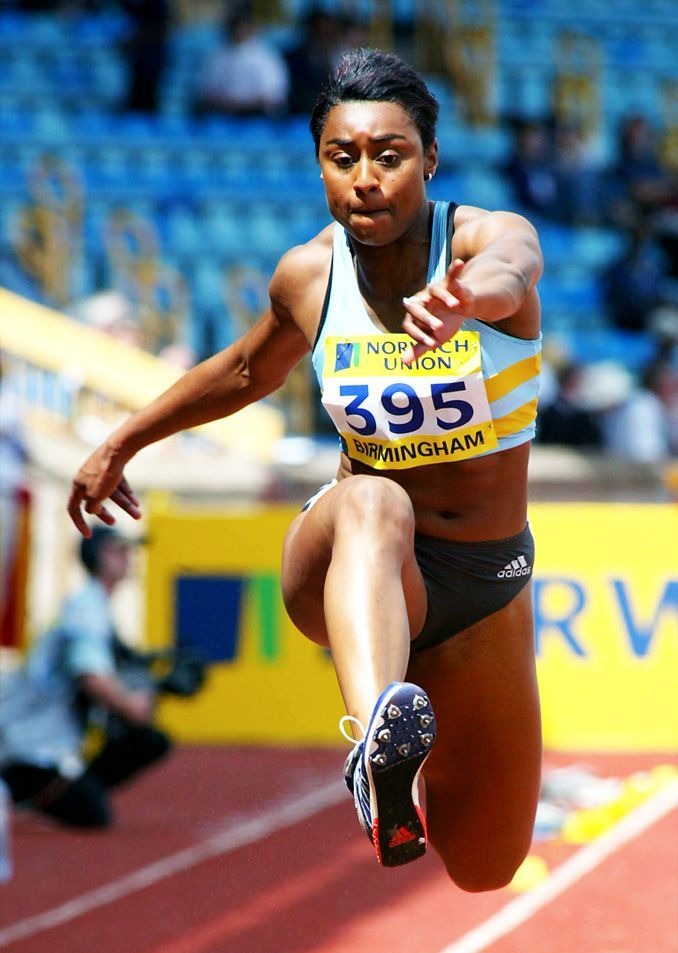 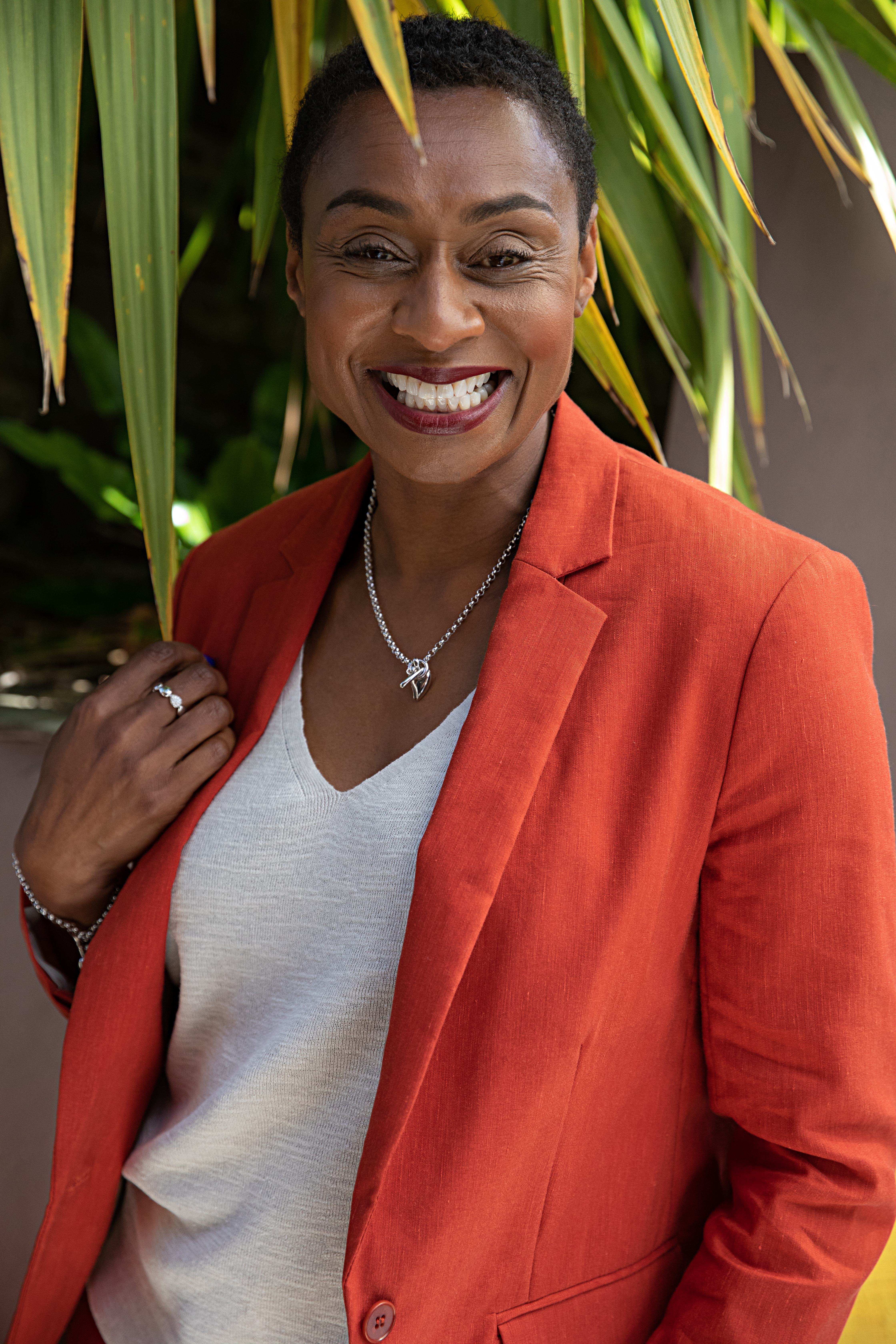 Elsewhere on Fabulous, we told you about how Denise Lewis uses coping strategies she learnt as an athlete to deal with late motherhood.

We also revealed why millions of girls are giving up on sport – including sexism and chronic lack of opportunity.

And Piers Morgan's personal trainer Sarah Lindsay explains why he would make the perfect Olympian.

Called, Me, N-word, racists, the
Celebrities