Who hasn’t had the nightmare? It’s the one about being caught in public dressed in your undies. Therapists and dream bibles tend to cast these dreams as symbolic expressions of shame or repression.

Yet what if the so-called experts are wrong and these dreams are instead a subconscious bid for liberation? Shed the embarrassment along with those constricting outer garments. Go forth proudly in your turtle-print boxers or your Cosabella bra.

That is assuredly what a lot of people are doing lately, as many venture forth after 16 months of hibernation with a startling degree of license about what passes for street wear. 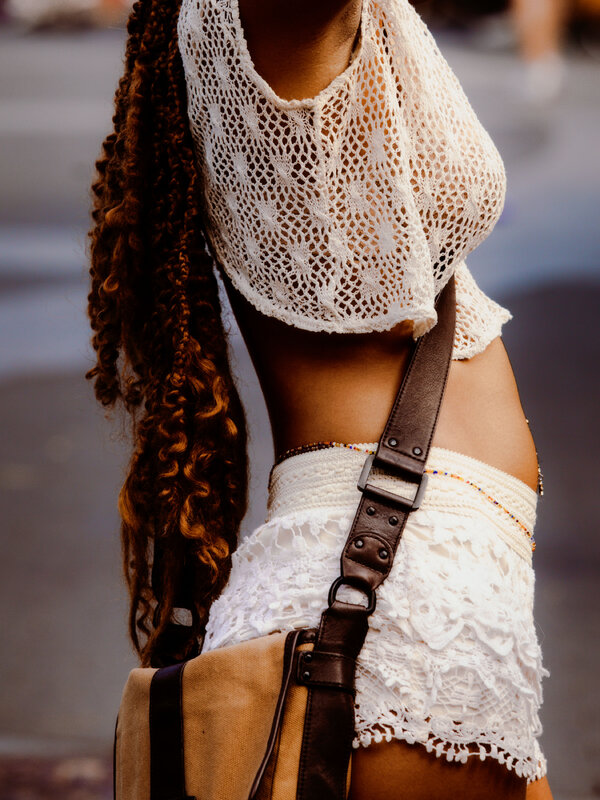 As recently as a decade ago, it was a rarity to spot people on Fifth Avenue, in Washington Square Park, riding the subway or milling about at airports in various states of advanced dishabille. Anyone who’s taken a stroll in New York lately can tell you that’s not true anymore.

People, in other words, are running around half-naked.

Last week Claudia Summers, a writer, was out doing errands in Midtown Manhattan when she passed a young woman nonchalantly ambling along 33rd Street near Moynihan Train Hall dressed in low-slung jeans and a bra. “Was it a sports bra?” a follower inquired after Ms. Summers posted a snapshot of the woman to her Instagram account.

“Most definitely not!” replied Ms. Summers, who quickly added that she admired the woman’s moxie and, anyway, the day was hot.

Of course it wasn’t a bra top. Bralettes, itty-bitty bandeaus and crocheted bikinis are everywhere. So, too, are Daisy Dukes cut high enough to expose buttocks curvature. And these items are by no means relegated to people who identify with the pronouns “she” and “her.”

“I’m an exhibitionist, and I get pleasure from showing off my body,” said Kae Cook, 32, a messenger, of his wardrobe choice one recent evening as he made his way across Eighth Street in the East Village.

To keep cool on a blistering day, Mr. Cook had taken to the streets dressed in a pair of mid-thigh bike shorts and a strappy sports bra top. “Especially after a pandemic, people are taking pleasure in showing off their bodies, no matter what that body is, and I’m very comfortable with that,” he said.

That not everyone shares his view can be seen from the case of Deniz Saypinar, a Turkish bodybuilder and social media influencer who was recently blocked from boarding an American Airlines flight from Texas to Miami, allegedly because her taut brown tank top and super-abbreviated shorts were likely to “disturb families” on the plane.

Ms. Saypinar, 26, quickly took to social media to recount the incident for the benefit of her one million followers, tearfully explaining that the gate staff had insulted her by claiming she’d been close to “naked,” which, in all fairness, she had.

In a statement of its own, American Airlines confirmed that Ms. Saypinar had been denied boarding and rebooked on a later flight, though clad in more modest attire: “As stated in the conditions of a carriage, all customers must dress appropriately and offensive clothing isn’t permitted on board our flights.”

What one might term the conditions of carriage shift all the time in the broader culture, where women’s dress has always tended to attract controversy and society has sharply regulated choice of attire according to the political climate, mores and tastes.

“Effort to legislate modesty are always unevenly imposed and accepted,” Reina Lewis, a professor of cultural studies at London College of Fashion, said recently by phone, adding that while the current flesh parade surely signals some kind of liberation, it is one that, likely as not, is more firmly rooted in pandemic pragmatism than a desire to flout conventional morality.

“Coming out of Covid lockdown, an awful lot of people need to get out,” she said. Young people largely couldn’t date. Many are now desperate for vacations they are unlikely to have. Travel is more expensive and difficult.

“So, basically,” Dr. Lewis said, “this is people having to have their vacation at home.” Those casual get-ups we once reserved for pool parties and backyard barbecues are now being brought out for the only holiday destinations available to many of us: urban parks and city streets.

“The world is getting hotter with global warming,” Nefalfj Lewis, a bartender, said last week as she and a friend made their way across St. Marks Place. Despite wilting subtropical humidity, Ms. Lewis, 25, looked unfazed by the weather. “The city is hot and filthy, so you have to do what you can to stay cool and comfortable,” she said, standing in a striped stretch-cotton onesie with a beach towel (for riding the “dirty” subway) tucked under her arm.

But what of traditional dress codes and the days of dressing up, not down, for city life? Have New Yorkers abandoned vanity for comfort and conceded the city’s edge in the global competition for primacy among urban fashion capitals to places like Paris and Milan?

“I understand that we’ve gone from being hidden, hiding, and no one cares what you wear because nobody sees you to this unexpected ‘coming out,’” Linda Fargo, the director of women’s fashion for Bergdorf Goodman, wrote in a recent text message, describing what she views as a lowering of the bar for civic pride. “I’ve never seen this look or self-expression, no matter the time and place — unless we’re talking about Ibiza or St. Tropez.”

But hadn’t boundaries of all kinds already begun to erode before lockdown, when pajama bottoms made their debut on city sidewalks, along with fuzzy slippers, Lululemon tights and shower shoes? (Never mind spandex bike shorts.) Propriety long ago came to seem like morality’s prairie dress, standing prim in a riotous digital landscape where no one knows who is Zooming pants-less and intimate selfies are the equivalent of a Tumblr hello.

Seen in that light, underwear on Fifth Avenue was probably always a logical endpoint in a progressive blurring of distinctions between public and private. Or so I imagined until an afternoon last week when, glancing up from my Harvest Bowl at Sweetgreen, I spotted through the window a young woman casually crossing Astor Place wearing a pair of cutoffs, some sandals and — it is fully legal to do this — naked above the waist.