Home » Fashion » The Disruption of Weddings, Then and Now

The Disruption of Weddings, Then and Now

Deany Keith was 16 and living with her family in Corning, N.Y., when her brother, Preston Douglas Powers, a soldier in World War II, sent her a silk German parachute he found while on the beach in Normandy, France, on D-Day. It was 1944 and parachutes had become coveted items — for making wedding dresses.

“When I got engaged to a boy I met at a square dance, who was also in the service, my mother made me a wedding gown out of it because material for dresses was scarce,” said Ms. Keith, now 93, from her home at Country Meadows, a retirement community in York, Pa. “The fact that my brother thought enough to send it to me, and that my mother made the dress, made this special. It was a family effort. You treasured something like this. Especially during that time.”

She and her husband, Clinton Keith, were married Aug. 23, 1947. Today her dress is one of 20 that have been donated to the National WWII Museum in New Orleans.

In the 1940s, silk became difficult to obtain and was reserved for essential items like parachutes, not dresses. Mosquito netting, another sought-after article found on the battlefield, was also shipped home by soldiers to become bridal veils.

“The dresses from 1941 to 1948 run the gamut in design, material and style. They tell the story of resourcefulness and improv,” said Kimberly Guise, the museum’s assistant director for curatorial services. “People think of the conflict, the violence and weaponry. They don’t expect to see a wedding dress or an item used in combat that’s been transformed into something beautiful that offers a new start.”

[Sign up for Love Letter and always get the latest in Modern Love, weddings, and relationships in the news by email.] 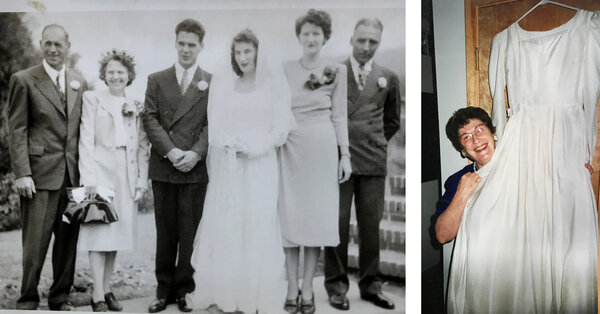 These wedding artifacts and heirlooms are a testament to the creative, inventive and resourceful way women married during years marked by loss, uncertainty, fear and longing.

“The war brought extreme shortages of goods,” said Tyler Bamford, a historian and the Sherry and Alan Leventhal research fellow at the museum. “New suits and weddings dresses were out of the question. So were wedding cakes, because there was a sugar shortage.”

Eighty years later, the coronavirus pandemic has made couples approach wedding ceremonies and receptions with similar flexibility, creativity and resourcefulness.

Mr. Bamford noted the parallels. “Venues closed and limits were put on the amount of guests couples could invite,” he said. “Today, and during the war, there were travel bans and housing shortages.”

“Substantial sacrifices were made and weddings were considerably different than what brides envisioned,” he continued. “In both cases there was wedding and marriage stress, small ceremonies, and many family members were unable to attend.”

However, while World War II allowed for expanded opportunities to meet people and encourage relationships among strangers, the pandemic restricted contact and connections.

“During the war it was very easy to meet people because young men were moving around the country like never before,” Ms. Guise said. “A lot of them were passing through New Orleans.”

The city, already a tourist destination, was becoming a center of wartime production and training and a port of embarkation. With the influx of soldiers, the social scene became lively.

“They were going to dances, dinners and canteens, some run by the United Service Organizations,” Ms. Guise said. “It was exciting for women to be introduced to these new men in uniforms, which was glamorous and caused a few hasty marriages.”

Today that opportunity does not exist. But other correlations remain. Weddings during the war and now have been scaled down, many couples waited to marry, and people were concerned for their loved ones’ safety. Those who could not be together, whether in battle or because of a shutdown, had to deal with long periods of separation.

Mr. Bamford highlighted the fact that couples today, those who have postponed and pivoted, “have put off the joy and celebrations, like they did back then, with the hope the waiting will be worth it.”

“When faced with enormous challenges, couples then and now found unexpected ways to celebrate their unions, despite the roadblocks,” he said.

The museum has also amassed a collection of more than 15,000 love letters and breakup letters documenting the long-distance relationships between soldiers and sailors and their girlfriends, fiancées and wives. They speak to and highlight the losses, difficulties and horrors of the war. Like the dresses, these irreplaceable letters are a nod to a lost art, and the loss of something romantic. (A lip emoji is a poor substitute for a real lipstick mark that has been purposely pressed onto onionskin paper.)

“These letters and dresses are as beautiful as the stories the brides and their families have told us regarding how they got them,” Ms. Guise said. The stories are shared in written profiles, oral histories and digital images found on the museum’s website.

“There’s a legacy in these personal items,” she said. “The war didn’t just play out on the battlefields. It stretched onto the home front.”

Mr. Bamford said the parachutes were prime examples of this. “The parachutes saved the soldiers’ lives and was central to their identity.” he said. “They were considered an elite item. If a wife had access to it, that was a rare commodity. These experiences teach us a lot more about ourselves than we might have expected.”

Ms. Keith spoke about hope and optimism, then and now. “We got through the war,” she said. “We will get through Covid.”

Her husband died in 2019. Ms. Keith said she donated her dress because of its sentimental value and so others could see a piece of history.

“I cherished it while I had it and then I wore it,” she said. “The dress is 72 years old. The war was part of the meaning of my having it. I have no idea what I would have worn had I not had it. That alone had value.”