André Leon Talley, the towering legend who shattered expectations surrounding race in the fashion industry as the rare Black editor in a predominantly White and elitist industry, died Tuesday US time at the age of 73.

The death of Talley, the former editor-at-large of US Vogue whose career in fashion journalism spanned six decades, was confirmed by his literary agent, David Vigliano, to USA Today and by friend Darren Walker, the president of the Ford Foundation, to the New York Times. Talley’s Instagram account also confirmed his death early Wednesday.

“Mr. Talley was the larger-than-life, longtime creative director at Vogue during its rise to dominance as the world’s fashion bible,” the post reads. “Over the past five decades as an international icon was a close confidant of Yves Saint Laurent, Karl Lagerfeld, Paloma Picasso, Diane von Furstenberg, Bethann Hardison, Manolo Blahnik and he had a penchant for discovering, nurturing and celebrating young designers.”

Talley had a series of health struggles, but no details surrounding the cause of death were immediately available as of early Wednesday US time. He died at a hospital in White Plains, N.Y., according to TMZ, the first to report his death.

Talley was best known as the first Black man to be creative director for Vogue from 1988 to 1995 and then again from 1998 to 2013. He was described by the New Yorker in 1994 as “The Only One,” in reference to how rare it was for a Black man to be atop the fashion industry. He was recently introduced to newer generations of fans as a judge on America’s Next Top Model. 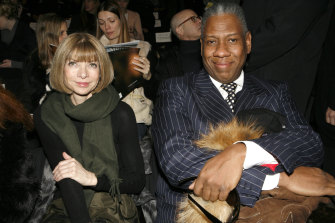 His relationship and creative partnership with Vogue editor Anna Wintour helped bring him to new heights in a career that saw him dress Michelle Obama when she was first lady and advise the likes of designer Oscar de la Renta and supermodel Naomi Campbell.

“My fashion history is not so great, and his is impeccable, so I think I learned a lot from him,” Wintour said in the 2018 documentary The Gospel According to André.

In a statement to Vogue on Wednesday US time, Wintour said, “The loss of André is felt by so many of us today.” She praised his generational talent and infectious enthusiasm, but acknowledged the ups and downs in their relationship. Talley accused her of abandoning him following the release of his 2020 memoir.

“Yet it’s the loss of André as my colleague and friend that I think of now; it’s immeasurable,” Wintour said. “He was magnificent and erudite and wickedly funny – and mercurial, too. Like many decades-long relationships, there were complicated moments, but all I want to remember today, all I care about, is the brilliant and compassionate man who was a generous and loving friend to me and to my family for many, many years, and who we will all miss so much.” 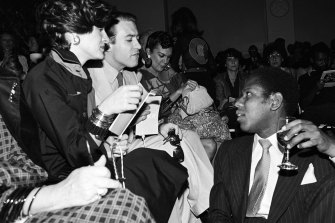 Paloma Picasso and Rafael Lopez-Sanchez talk to Andre Leon Talley in the front row during a benefit runway show of Chloe by Karl Lagerfeld for the Memorial Sloan-Kettering Cancer Center, held at Christies.

Born on October 16, 1948, in Washington, DC, Talley was raised by his maternal grandmother, Binnie Francis Davis, who was a cleaner at Duke University. Talley learned style and fashion from Davis and her friends when they would wear their finest hats and clothes every Sunday at church.

When he was around 9 or 10, Talley found an issue of Vogue at his public library in Durham, N.C. Talley told The Washington Post’s Robin Givhan in 2017 that finding the issue of Vogue “was the escape moment for me.” He said to NPR in 2018 that flipping through the magazine felt like he was going down a “rabbit hole” into “a world of glamour.”

After he served as a receptionist at Interview magazine under Andy Warhol and the Paris bureau chief of Women’s Wear Daily, he arrived at Vogue with a vision of what fashion could, and should, look like on people of all colours and backgrounds.

The capes, kaftans, suits and robes he wore became part of his signature look and gave Talley a regal presence.“You can be aristocratic without having been born into an aristocratic family,” he said in the film.

Talk-show host Whoopi Goldberg described Talley in The Gospel According to André as being “so many things he was not supposed to be.”

“André is one of the last of those great editors who knows what they are looking at, knows what they are seeing, knows where it came from,” designer Tom Ford said in the 2018 documentary. “André tosses out all these different words and he’s so big and so grand, a lot of people think, ‘This guy is crazy,’ but it’s a fabulous insanity.” 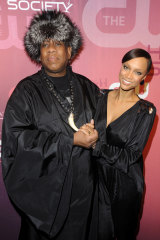 André Leon Talley and Tyra Banks during the filming of America’s Next Top Model in 2010.Credit:AP

Talley, who was openly gay, was a major figure in the LGBTQI community. He resigned as editor-at-large at Numéro Russia magazine in 2014 due to the anti-LGBTQI laws in the country. He apparently had little semblance of a romantic life, and publicly acknowledged he was “afraid to fall in love.”

“However, I’m not going to say it’s the worst life,” he told NPR. “It’s been a wonderful life.”

Before his death, Talley served as the artistic director of the online retailer Zappos, and had been on the board of trustees of Savannah College of Art and Design. He wrote three books, including his 2020 memoir, The Chiffon Trenches, which was a New York Times bestseller. Talley was awarded the Chevalier de l’Ordre des Arts et des Lettres from France in 2020 and given the North Carolina Governor’s award for literature last year.

In his memoir, Talley reflected on not just how far he had come since growing up in the Jim Crow South but how much more he had left to give to fashion and culture.

“To my 12-year-old self, raised in the segregated South, the idea of a Black man playing any kind of role in this world seemed an impossibility,” he wrote. “To think of where I’ve come from, where we’ve come from, in my lifetime, and where we are today, is amazing. And, yet, of course, we still have so far to go.”

News of Talley’s death rocked people in the fashion world, who remembered him on Wednesday as an icon. Vogue mourned Talley on Twitter, honouring a man the magazine described as “one of the most recognisable faces and beloved figures in the industry, and beyond.” Bravo host Andy Cohen described his friend as “a force in fashion, a legendary storyteller.”

On Instagram, von Furstenberg said she was heartbroken over the loss of her peer.

“No one saw the world in a more glamorous way than you did. No one was grander and more soulful than you were. The world will be less joyful now,” she wrote. “I have loved you and laughed with you for 45 years … I will miss your loud screams … I love you soooo much.”

Jeremy O’Harris, the playwright for Slave Play, described Talley on Twitter as “a beacon of grace of aspiration” for a generation of young men.

“For a little black gay boy who reached for the stars from the south there were few people I could look up to up there amongst the stars who looked like me just more fab except for you André,” O’Harris wrote.

Many shared photos of Talley smiling, dancing and looking fabulous throughout the years.

Actress Viola Davis shared a picture of her and Talley with a simple message to the fashion giant that was echoed by other admirers worldwide: “Rest well King.”