The naked truth about this year’s Emmys red carpet

How best to dissect the first “proper” Emmys red carpet in three years?

We could talk about the starlets in their column gowns: Lily James in Atelier Versace, Alexandra Daddario in Dior, Britt Lower in a Cucculleli Shaheen dress – with matching gloves – reminiscent of the Empire State Building. 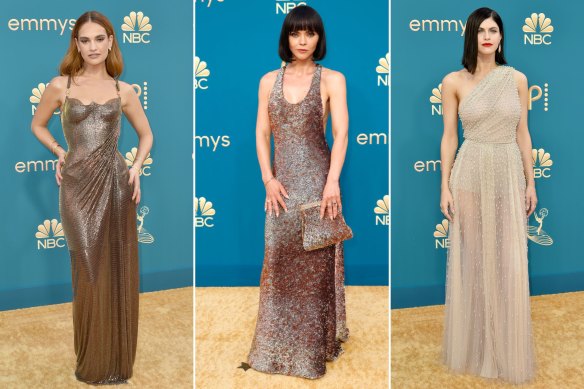 Or we could praise the men who dared to wear white suits: Succession’s Nicholas Braun in Dior, John Legend (who complained on social media about the paucity of snacks supplied to guests) and Andrew Garfield. Though, in truth the best-dressed man was The Great’s Nicholas Hoult, in Dior, pulling off flared trousers and a cropped crossover jacket like he’d done it a thousand times (incidentally, Hoult wore white to the Venice Film Festival just a week beforehand). 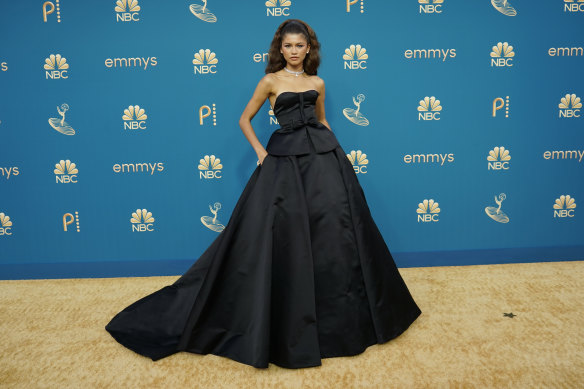 And we could talk about Zendaya, oh Zendaya, in new-season Valentino couture that was the very essence of Old Hollywood (other takes on vintage glamour, such as Elle Fanning, skated too close to costume and didn’t go down as flawlessly).

But the night really belonged to women who, in another time, would have been “othered” for their age, colour or for daring to take up so much … space. Women such as Lizzo, whose frothy red gown set social media ablaze when it was teased earlier in the day on Twitter and Instagram. Or Jennifer Coolidge, whose emerald gown won’t necessarily make many best-dressed lists but who scored full marks for plucking her notes from her cleavage to accept her award for The White Lotus. Oh, and Coolidge is 61. 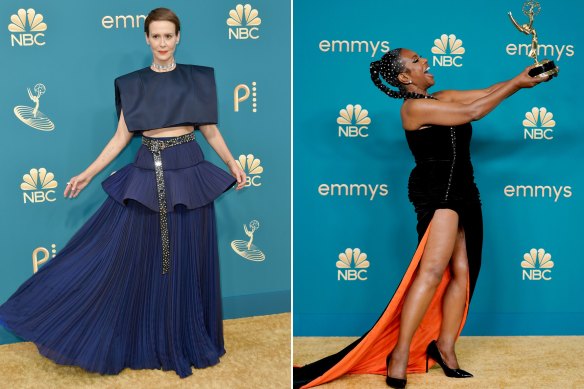 And how can we not talk about Sheryl Lee Ralph, 65, who had the audience in tears with her melodic acceptance speech. Ralph, who nearly quit the industry 15 years ago, is now an Emmy winner, and is also bound to set a new make-up trend for her bedazzled hairdo. Who says women over 60 can’t be the red carpet winners?

Well, for a long time, Hollywood did, choosing to shelve women on the wrong side of 35 instead of creating roles for them. Designers also shied away from dressing them, in favour of bedecking the next hot young thing.

But the truth is, if COVID, Black Lives Matter and #metoo has taught us anything, it’s that there is plenty of room for everyone and their oversized ballgown.

Not quite 50 but hopefully at the top of many best-dressed lists was Sara Paulson, whose custom Louis Vuitton look in the deepest of purples had just the right balance of military-inspired bib on top, and swishy pleated skirt on the bottom, all expertly finished by celebrity stylist Karla Welch, who in some circles inspires as much if not more fangirling than the stars she dresses.

But not every celebrity stylist unanimously nailed the brief, with several dresses dividing commentary. Sydney Sweeney, nominated for The White Lotus and Euphoria, wore custom Oscar de la Renta. While Sweeney earned all-round praise for her effortless hair, several thought the “mullet” train wasn’t the most flattering style on the red carpet, although the photos shot beforehand and posted by her stylist, Molly Dickson, gave a better vantage.