Home » Fashion » Valkyrae Gets a Big Chair in the Gaming World

Valkyrae Gets a Big Chair in the Gaming World

In the relentlessly on-demand world of livestream gaming, few are as in demand as the YouTube creator Valkyrae.

Last month, over 650,000 fans viewed her playing the space-cartoon multiplayer game Among Us. A few days earlier, she starred as the blood-spitting heroine in Machine Gun Kelly’s new horror-tinged music video, “Day Walker.” Valkyrae, who goes by Rae, also announced a web talk show, “Q and Rae,” and was declared the “Queen of YouTube” by the online e-sports news site Dexerto.

Stream Hatchet, a gaming analytics company, estimates that fans spent 24 million hours watching her during the pandemic. “Rae is the fastest growing live streamer in the entire world, and now the biggest female gaming streamer in the world,” Ryan Wyatt, the head of YouTube’s gaming division, declared on Twitter in October.

The 29-year-old gamer can now add company executive to her accomplishments. Valkyrae, whose real name is Rachell Hofstetter, was named today as one of six owners of 100 Thieves, the e-sports team juggernaut and lifestyle brand in Los Angeles. Jack Dunlop, 26, better known as the Fortnite megastar CouRage, was also named as an owner.

They join Scooter Braun, the music manager; Dan Gilbert, the Cleveland Cavaliers owner and co-founder of Quicken Loans; the rapper Drake; and Matthew Haag, known as “Nadeshot” and who is the former Call of Duty champion who founded 100 Thieves. “One of our core beliefs is to build a brand that is by gamers, for gamers,” Mr. Haag said.

As co-owners, Valkyrae and CouRage will receive equity in the company, which Forbes magazine recently valued at $190 million. Part of their role is sweet talking and signing new talent in the fickle, youth-driven world of high-profile gamers, either as e-sport athletes or livestreaming personalities. 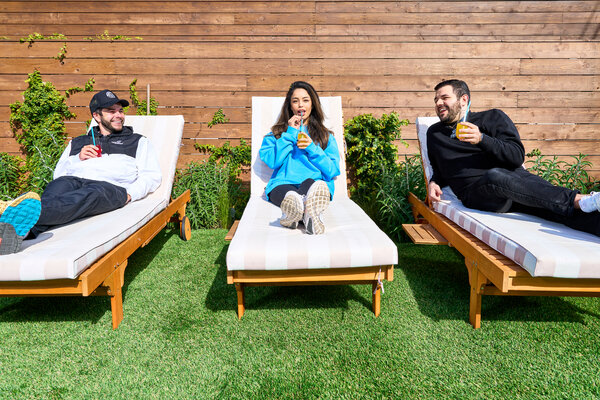 They will also seek moneymaking initiatives beyond actual gaming, including expanding the company’s popular street wear line (think Supreme for streamers) and working with the Creative Artists Agency, which signed 100 Thieves in October, on entertainment deals in film, television and podcasts.

“Rae and Jack have such great instincts in the gaming community, which matters now more than ever because so many young kids want to be entertainers in the digital space,” Mr. Haag said.

The appointment of Valkyrae, the company’s first female owner, is also an acknowledgment of the growing influence of female players, who now make up nearly 41 percent of video game users in the United States, according to Statista.

“My girlfriends and I have been playing video games since we were 6 years old,” Valkyrae said. “It’s not that women gamers are new. What is new is that we are more visible now.”

In a Zoom interview last month, Valkyrae was still reeling from her title change. “Yeah, apparently somehow I am co-owner of 100 Thieves, which is insane,” she said, flashing a toothy grin that is well known to her fans.

She was seated in her usual spot: a white ergonomic gaming chair by Mavix, before a 27-inch HP Omen gaming monitor in the bedroom of her new modern home just outside of Beverly Hills. Her blue-light glasses and large wireless headphones made her resemble an air traffic controller, tasked with managing an endless livestream.

“I started streaming when I was 23 and I just haven’t stopped,” she said. “I’ve been doing this every day for years and years.”

Women like Valkyrae and Pokimane, a 24-year-old Canadian-Moroccan streamer with over seven million followers on Twitch, are part of a new generation of high-profile female gamers who have a cultural footprint that rivals that of Hollywood actors and pro athletes among Gen Z.

Corporations have noticed. Valkyrae recently teamed up with Sweetgreen, a salad chain, as the face of its Crispy Collections menu, and Totino’s, the frozen-pizza brand, has sponsored her streams. On Tuesday, she joined Jimmy Fallon, Questlove and the cast of Netflix’s “Stranger Things” on the “The Tonight Show’s” Twitch channel.

Heightened visibility has come with heightened misogyny and harassment, including an incident in January when Valkyrae was doxxed on Twitter by a stalker who tweeted out her home address. “There is a difference in the verbiage that some trolls will say toward women specifically, that men are never going to hear,” she said.

Being outspoken about online threats makes her relatable to her streaming audience, which is nearly half girls and young women.

“When you look at the amount of barriers to participation women face, including outright harassment, you began to see that women are some of the most dedicated players out there,” said T.L. Taylor, a sociologist at the Massachusetts Institute of Technology and author of “Watch Me Play: Twitch and the Rise of Game Live Streaming.” “These are gamers working that much harder to remain in a culture that is often actively pushing them out.”

For Valkyrae, gaming has long been a way to overcome odds. She grew up in Moses Lake, a rural town in central Washington. Playing Super Mario Brothers on her Nintendo 64 was a way to drown out the screaming fights between her parents.

She supported herself through community college by working at GameStop. Access to the latest PlayStation or Xbox titles made good fodder for Instagram. “I was depressed and alone,” she said. “All I had was work and video games.”

Encouraged by her online followers, she joined Twitch in 2015, where she found her tribe in the player-versus-player arena of Fortnite and the action role-playing game Dark Souls. By 23, she was earning enough sponsorship money to become a full-time gamer.

Fans were not only drawn to her superhuman reflexes and her mastery of various titles including Fortnite, League of Legends, Teamfight Tactics and Valorant. Her bubbly, unfiltered personality and goofy nature has earned her millions of followers, many of whom embrace her like a big sister.

She talks openly about her autoimmune protocol diet, which requires her to eat foods that reduce inflammation, and being a workaholic. She shares stories about her family, and has no qualms about telling viewers that she needs to take a streaming break.

“There is not a lot of yellow tape or privacy around her life,” Mr. Haag said. “In my mind, her ability to open up and be authentic is probably the genesis of her success.”

She is also the family breadwinner. After her mother lost her job at a food plant, Valkyrae bought her a house in the Philippines, where she is from. Before her father died of cancer in 2017, she paid for his end-of-life care.

“Everyone thinks the people they see online everyday live perfect lives,” she said. “I hope I can help people see that things are difficult for everyone.”

A year ago, YouTube signed Valkyrae to a significant multiyear livestream deal. As part of the contract, she agreed to leave Twitch and effectively rebuild her subscriber base from scratch.

For the first several months, people were slow to migrate over to her new channel. Twitch, which is owned by Amazon and home to roughly two-thirds of online gaming viewership, is like “a pond,” she said, whereas YouTube, the second-most popular website in the world (after its parent company, Google), is “more like the ocean.”

For three months starting in August, she spent six to nine hours a day playing Among Us with half a billion players worldwide. Celebrities as diverse as Lil Nas X and Representative Alexandria Ocasio-Cortez joined her streams. In December, the Game Awards (the Oscars of gaming, basically) crowned her as the content creator of the year.

As she approaches 30, she is taking stock of her future in a business that, like other organized sports, is a young person’s game. “I am recognizing more and more how unhealthy the industry is,” she said. “You never leave your room, there is no socializing or co-workers except online. I mean, you’re sitting in a chair all day. There will always be another stream or game to play.”

The deal with 100 Thieves may allow her to balance being a player and a businesswoman. “As I get older, I am trying to plan how I am going to get out of this, what am I going to do next?” she said, sitting up on her Mavix chair. “It makes me so happy to be a pioneer and a role model for a lot of women in this industry.”