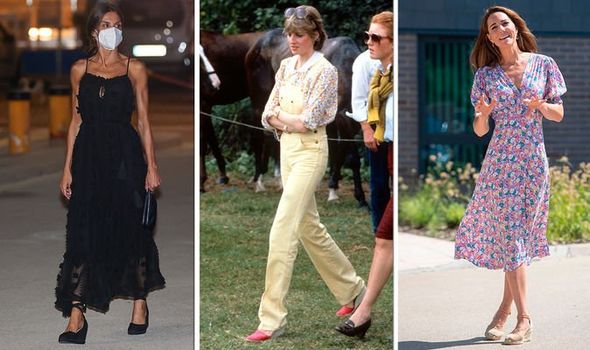 Although Kate Middleton has occasionally been seen in jeans over the past few years, it took the Duchess a while to build enough confidence to start wearing casualwear. There is an immense pressure for female royals to wear the correct outfit and look the part, but things have become less strict and more relaxed for them since Lady Diana Spencer’s days. However, the late princess was never a complete stickler to the rules, and she wore what she wanted. Thanks to her experimentative fashion sense, Diana paved the way for today’s young royals.

From her sheep print jumper to her black “revenge” dress, Diana’s clothes have continued to be talking points to this day.

Another outfit that made her stand out from other famous women at the time – and even now – was a pair of yellow denim dungarees.

The princess wore them over a printed yellow and orange blouse to a polo match with Prince Charles in 1981, weeks before the couple’s marriage.

On her feet, Diana donned a pair of bright pink heeled espadrilles.

Not only are espadrilles everywhere on the British high street, they are also this summer’s royal choice of footwear.

Everyone from Queen Letizia to the Duchess of Cambridge have been seen in recent weeks wearing espadrilles.

“As with so many trends, where Diana went the world followed,” said Samantha Harman, a fashion expert and personal stylist based in London.

“She is probably the first example of a royal wearing espadrilles in public.”

Since then, many female royals have worn the Spanish-style shoes.

Samantha said: “The Duchess of Cambridge has worn her espadrilles with everything, from floaty dresses to jeans and tailored trousers.

“The Duchess of Sussex also made espadrilles a key shoe choice for the 2018 Australian tour.”

The personal stylist stressed the “versatility” of the shoes and noted that they have been worn by royals for both formal and informal occasions.

“Espadrilles are great for dressing up or down,” she said.

“Lady Amelia Windsor wore them to a wedding in 2019, while Kate Middleton has been seen running whilst playing with her children in hers.”

Samantha added: “I think it’s the versatility that makes the espadrilles a popular summer shoe choice with the royals.

“Lots of women find shoes the trickiest part of their outfit.

“They put together a look and then realise ‘I don’t have any shoes to go with this, and especially not shoes that are comfy’.

“This is what makes espadrilles the perfect summer shoe. You can get a bit of height, which makes them great with maxi dresses or wide-leg trousers, and you can walk in them.”

The great thing about espadrilles, according to Samantha, is that “they are never going to go out of style”, as proven by pictures of Diana in the 80s and Kate in the noughties.

The fashion expert said: “The Duchess of Cambridge repeatedly wore the ‘Fleur’ style from Monsoon in her early days as a royal, and got them back out again for an event in 2019.

“Most of the royal women have been spotted in espadrilles at some point or another – but not the Queen.