Six people were missing after a mudslide measuring an estimated two football fields across slammed into a neighborhood in the southeast Alaska community of Haines, Alaska State Troopers said Wednesday. It was one of several reported mudslides after a period of intense rain that authorities said destroyed at least four houses and damaged others. 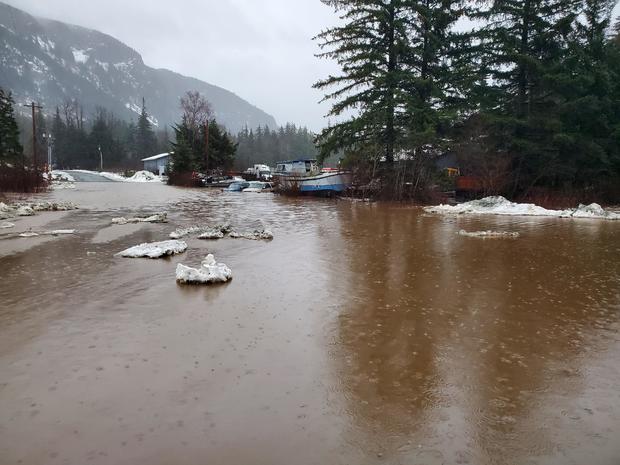 “The soil isn’t stable enough right now,” he said, adding the state will be providing additional resources Thursday. The borough has about 2,500 residents.

Those unaccounted for were in the Beach Road area, where the largest slide – about 600 feet wide – came down Wednesday afternoon, Olerud said. About 9 feet of mud and trees cover the area, according to the troopers.

About 30 people were evacuated, and emergency response crews rescued others, Olerud said. He did not have a total figure.

The Alaska Department of Transportation called the landslides and flooding in the area “devastating.”

“Over the past 24 hours, strong winds and record-breaking rainfall caused considerable damage to roads and infrastructure in many of Southeast Alaska’s communities,” the department said on Facebook. “Our crews are working non-stop to clear the waters and remove debris from our roadways and ditches.” 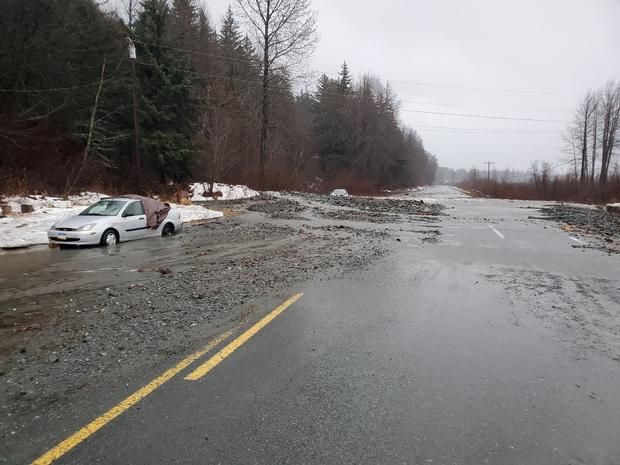 Rebecca Kameika lives on Beach Road, though closer to Haines than where the slide hit. She said slides and related road damage had left some neighborhoods inaccessible.

She and her boyfriend were staying at his place of work; they were fine and expected their home to be, too, but evacuated as a precaution, she said.

The incident is devastating for the community, said Kameika, who set up a fundraising account and plans to work with another group to make sure the money is distributed fairly and where it’s needed.

Haines resident Luke Williams said the community is coming together. This rainstorm has been the “worst I have ever seen,” he said, adding he’s lived in the area throughout his 39 years.

“That’s the one thing special about this small town. Everyone comes together no matter how mad one person is at another. In the end if there is an emergency we all come together to help each other,” he said.

An effort to fly search and rescue teams in a helicopter from Juneau was pushed back to Thursday morning, troopers said. The Coast Guard is also deploying forces from other ports in southeast Alaska to help.

“At this point we are aware that damage has occurred in the town of Haines following the report of multiple landslides in the borough,” said Capt. Stephen White, commander of Coast Guard Sector Juneau, said in a statement. “The scope of the damage is unknown at this time but we are proactively moving several assets and personnel to provide assistance to local first responders and the residents who may have been impacted by the landslides.”

A Coast Guard MH-60 Jayhawk helicopter crew was launched from Sitka to assist, and the Coast Guard cutters Liberty and Anacapa have been ordered to make preparations to sail to Haines to provide additional support.

A 45-foot Coast Guard response boat has also been launched from Juneau.

Olerud said the situation was moving so quickly he couldn’t provide a list of additional resources they may need.

“Prayers help. We can always take prayers. Those always work. We need a lot of those right now,” Olerud told the AP.