Stephen Sondheim's Sweeney Todd is a macabre delight. A musical thriller based on a Victorian-era penny dreadful, it relies on a match made in hell – the demon barber of the title, who slaughters his customers, and the conniving Mrs Lovett, who bakes his kill into pies in the shop below.

And who wouldn't want to see Anthony Warlow and Gina Riley as that diabolical duo? It's star casting of infernal genius. 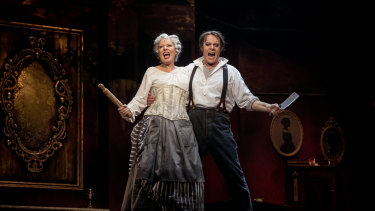 Gina Riley and Anthony Warlow are at the deliciously dark centre of Sweeney Todd.

What are they like? Well, Melbourne theatregoers have a handy point of comparison – a seductive production from Victorian Opera in 2015, with Teddy Tahu Rhodes as Sweeney and Antoinette Halloran as Mrs Lovett, and if this version doesn't always have a crust as crisp, there are fewer hairs and fingernails in the mince.

Where Tahu Rhodes acted robotically, Warlow's presence and histrionic command nail the agony at injustice that turns a tormented victim into a villain capable of genuinely shocking the audience. What follows – the implacable thirst for vengeance, the nihilistic insistence on a Hobbesian vision of "man devouring man" – turns into a self-fulfilling prophecy with doom-laden magnetism.

Gina Riley proves an ideal partner in crime. Apart from the accent, which slips a bit of Kim Craig into the Cockney mix, Riley positively glistens with wickedness as Mrs Lovett, her delicious cunning for comedy matched by impressive vocal talent equal to the demands of the role.

As Judge Turpin, Daniel Sumegi's malevolent credentials are beyond reproach – he sang Hagen, after all, in Neil Armfield's Ring Cycle for Opera Australia. Here his acting channels the ghost of Alan Rickman in the Tim Burton film, while the voice builds a deep and reverberant tomb of hypocrisy.

McCredie’s rendition of Johanna soars and he glows with youth unsullied by misfortune.

And the innocent romantic leads (Owen McCredie and Geneveive Kingsford) act well but seem a little vocally mismatched. McCredie's rendition of Johanna soars and he glows with youth unsullied by misfortune, but Kingsford massively overdoes the vibrato when purity of tone is called for.

Yet Theresa Borg's direction isn't as immersive in its world-building as it could be. Even though the initial sequence, where Sweeney is summoned from beyond the grave in a Victorian séance, works, the set seems static and half-heartedly tricksy, leading to overcompensation with stage business in crowd scenes.

Still, with conductor Vanessa Scammell and a full orchestra onstage, it's a tight fit.

This Sweeeney Todd could whet the blade more sharply, but in the end, the atmospherics are carried by Sondheim's brilliant music, and by two of Australia's brightest stars glittering darkly centre stage.