Home » Lifestyle » A guide to the 2021 Emmy nominees' significant others

A guide to the 2021 Emmy nominees' significant others

As the stars gear up for the 2021 Emmys on Sept. 19, Wonderwall.com is taking a look at who’s supporting this year’s crop of nominees at home and, COVID-19 restrictions willing, on the red carpet, starting with this actress and her love… Mj Rodriguez will be at the Emmys celebrating her nomination for her work on “Pose,” and she’ll be rooted on by her boyfriend, Stephen. Mj gushed about the screenwriter in a Valentine’s Day Instagram post this year, writing in part alongside this selfie, “This was the first day we met, and boy was it everything I planned it to be. You have set the highest standard for how any human should treat another human being. That is why I have Fallen so deeply in love with you.“

RELATED: The biggest celebrity LGBTQ news of 2021 so far

Kate Winslet celebrated her nomination for her performance on “Mare of Easttown” alongside her husband, Edward Abel Smith (formerly known as Ned Rocknroll). Edward, who’s the nephew of Virgin magnate Sir Richard Branson, supports Kate by being a “superhot, superhuman, stay-at-home dad” to their son, Bear, and taking care of her too, Kate told The New York Times. “He looks after us, especially me. I said to him earlier, like, ‘Neddy, could you do something for me?’ He just went, ‘Anything,'” adding, “He is an absolutely extraordinary life partner.” In addition to helping her run lines, he keeps busy maintaining a very healthy lifestyle. “He’s vegan, does yoga, breath work, and cold-water swims,” she shared.

RELATED: Celebrity couples who got married in 2021

In 2016, Ewan McGregor and Mary Elizabeth Winstead met on the set of “Fargo.” They were both married to other people at the time. In 2017, Mary Elizabeth announced her separation from her husband and Ewan ended his marriage of 22 years. Today, Ewan — who’s nominated for his performance on “Halston” — and Mary are new parents: They welcomed son Laurie in June 2021. Ewan is also a dad to four daughters with his first wife.

In 2011, Kenan Thompson — who’s nominated at the 2021 Emmys for his work on both “Saturday Night Live” and the sitcom “Keenan” — married former model Christina Evangeline. While in real life he’s a married father of two girls, he plays a widower on his eponymous sitcom — and Christina was not a fan of that setup at first. “She was like, ‘Oh, so I’m dead?” he shared on “The Tonight Show Starring Jimmy Fallon” before admitting she was just “giving me a hard time,” he explained. “But I was like, ‘Yeah… It’s not you, you know what I mean? It’s a show. It’s a different thing.”

English actor Josh O’Connor, who’s nominated for an Emmy for his performance on season 4 of “The Crown,” is dating Margot Hauer-King, the daughter of well-known British restaurateur Jeremy King. Her brother is actor Jonah Hauer-King, who will soon be starring as Prince Eric in Disney’s live-action version of “The Little Mermaid.” Margot herself is a communications director who moved back to the U.K. after attending college at Brown University in the States.

“Pose” star and Emmy nominee Billy Porter may be accompanied by his husband, Adam Smith, when he walks the Emmys red carpet at the Microsoft Theater in Downtown Los Angeles on Sept. 19, 2021. Billy and Adam — who co-owns the eyewear brand Native Ken — married in 2017 following a 16-day engagement, though they’d been dating off and on since 2009. “We kind of were enamored with each other from the beginning,” Adam once told People magazine. In 2015, after a five-year break, they rekindled their romance after a years-long friendship. “I pulled over, and he said, ‘I love you, and I’ve always loved you, and if there’s any chance, I would like another shot — I would like us to have another shot at this,'” Billy shared with People. “He was the one that got away — so it wasn’t hard. The yes came easy and immediately!”

“WandaVision” star and Emmy nominee Elizabeth Olsen is notoriously tight-lipped about her personal life, but she let it slip in June 2021 that she and love Robbie Arnett had quietly wed when she referred to him as her “husband” in an interview. The actress and the musician (who’s a vocalist for indie band Milo Greene) were first linked in 2017 and got engaged in 2019.

Lauren Morelli was a writer on “Orange Is the New Black” when she realized she was gay and then unexpectedly fell for “OITNB” actress Samira Wiley, who’s nominated for an Emmy in 2021 for her work on “The Handmaid’s Tale.” The couple, who got together in 2014 and wed in 2017, welcomed their first child, daughter George Elizabeth, in April 2021. “I remember those first months with her, trying to figure out her journey with her own sexuality. Feeling like she picked me as the person she was going to talk to about all of it. And it wasn’t sexual, it was just like a friend,” Samira explained in an interview with Bust. “That’s how we fell in love.”

“Hamilton” star Leslie Odom Jr. — who’s nominated for his work in Disney+’s recorded version of the lauded musical this year — has been married to fellow Broadway performer Nicolette Robinson since 2012. They have two children together. Their relationship started out professionally: He helped her with blocking for the musical “Once On This Island.” “It was not a romantic thing at first. It was really just a human connection like, ‘Wow, I need to be around this person all the time,'” Nicolette explained to Broadway.com. “We stayed in touch after the show and started dating pretty soon afterwards.”

In 2018, Hugh Grant — who’s nominated for his performance on “The Undoing” — married former TV producer Anna Eberstein, the co-founder of Ace Slippers, a London-based Scandinavian sock company. The two have been together since at least 2012, which is the year they welcomed son John into the world. They had an on-off relationship early on — Hugh had a second baby with the mother of his first child after heand Anna welcomed John — but soon were committed and welcomed two more kids before tying the knot. In June 2021, he dismissed rumors that he married her solely for “passport reasons,” a rumor that was floating around the Internet, by tweeting, “No I didn’t, @Internet. I married her because I love her.”

“This Is Us” star Sterling K. Brown married Ryan Michelle Bathe back in 2007 after meeting in the late ’90s at Stanford University. They dated at school, split for a few years and reunited in 2004. Today, he sings her praises. “Sincerely, she is infinitely more talented than her husband! She acts, she sings, she dances, she writes — as an artist, there’s not much she can’t do,” the Emmy nominee once gushed to Good Housekeeping. “As a partner, she continues to champion everything I do, and inspires me to tackle new challenges, especially when they frighten me! As a mother [to our two sons], she models for me what it looks like to place others’ needs before your own. … My life would be so small without her in it.”

Aidy Bryant, who’s nominated for her work on “Shrill” as well as “Saturday Night Live” this year, married former Vine star and comedian Conner O’Malley in 2018. Connor parlayed his Vine fame into a job on “Late Night With Seth Meyers” and Aidy later roasted his marriage proposal on that show in 2017. “I was like, ‘My dog doesn’t wear a bow tie! Where is he going tonight?’ Basically, the second I shut the door, a man — who I discovered was Conner — frantically came around the corner and was just like, ‘Will you marry me?!’ No box, no ‘I love you.’ … Just a man in full terror standing very far from a dog in a bow tie, just holding a loose ring going, ‘Will you marry me?!'”

Matthew Rhys is nominated for his work on HBO’s “Perry Mason.” The Welsh actor has been in a relationship with his “The Americans” co-star Keri Russell since 2014. “My acting was worse,” he told Esquire of the early seasons before the two got together. “I was trying to impress her so much I wasn’t doing anything.” He even jokingly blamed his crush on her for the show’s lack of award nominations success in the beginning, saying, “That’s why we didn’t get nominated for Emmys in seasons 1, 2 and 3. Damn you, Keri Russell!” Today, the two live in Brooklyn with their son, Sam, and Keri’s two children from her first marriage.

Anthony Anderson, who’s nominated for his work on “Black-ish,” is married to his high school sweetheart, Alvina Stewart. The couple wed in 1999 and have two children together, Kyra and Nathan. Though they’ve been together for more than 20 years, it hasn’t always been smooth sailing for the couple. In 2015, Alvina filed for divorce after the couple reportedly separated a year earlier. However, by 2017, she was back to walking the red carpet with Anthony — and they’ve been together ever since. 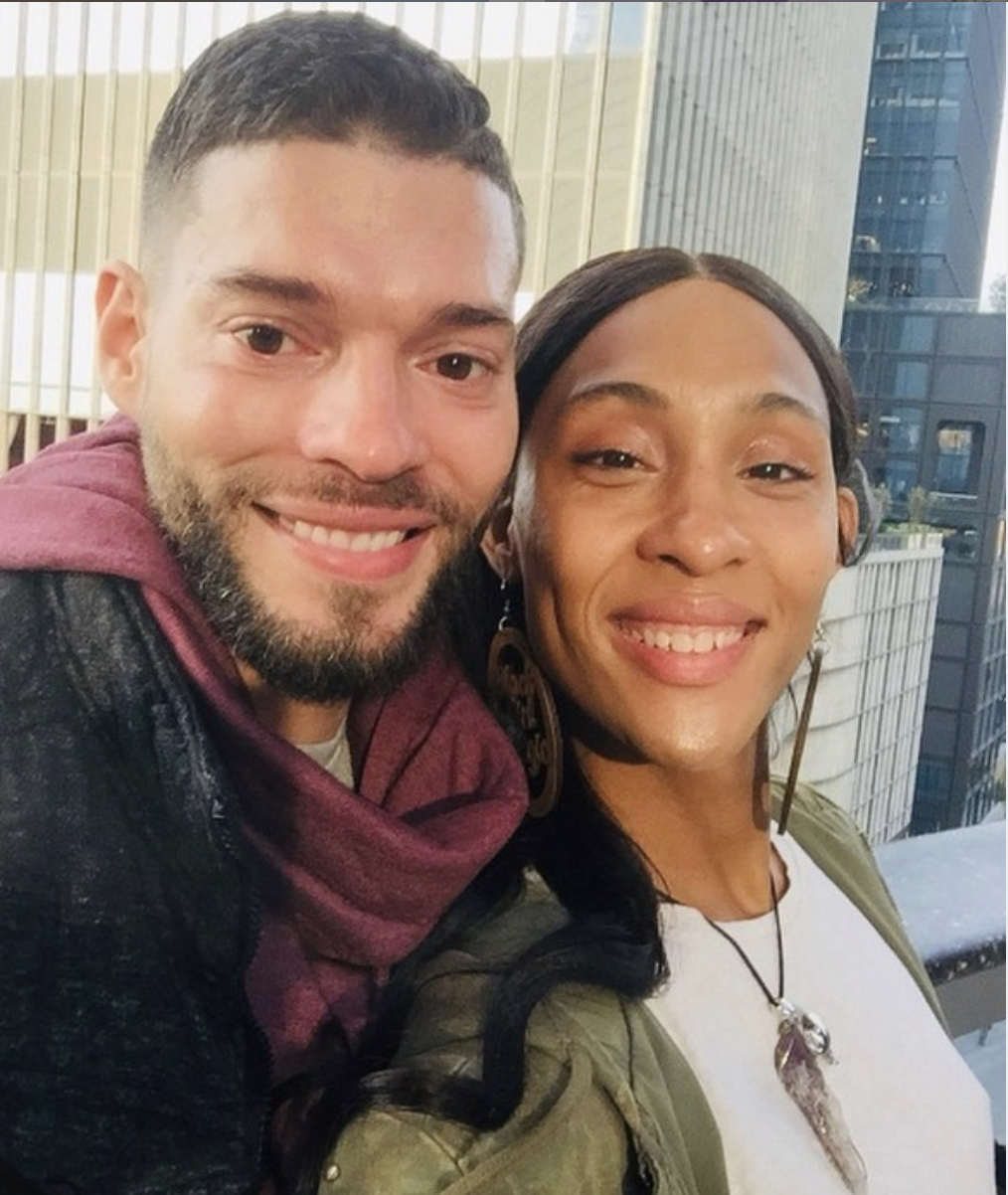 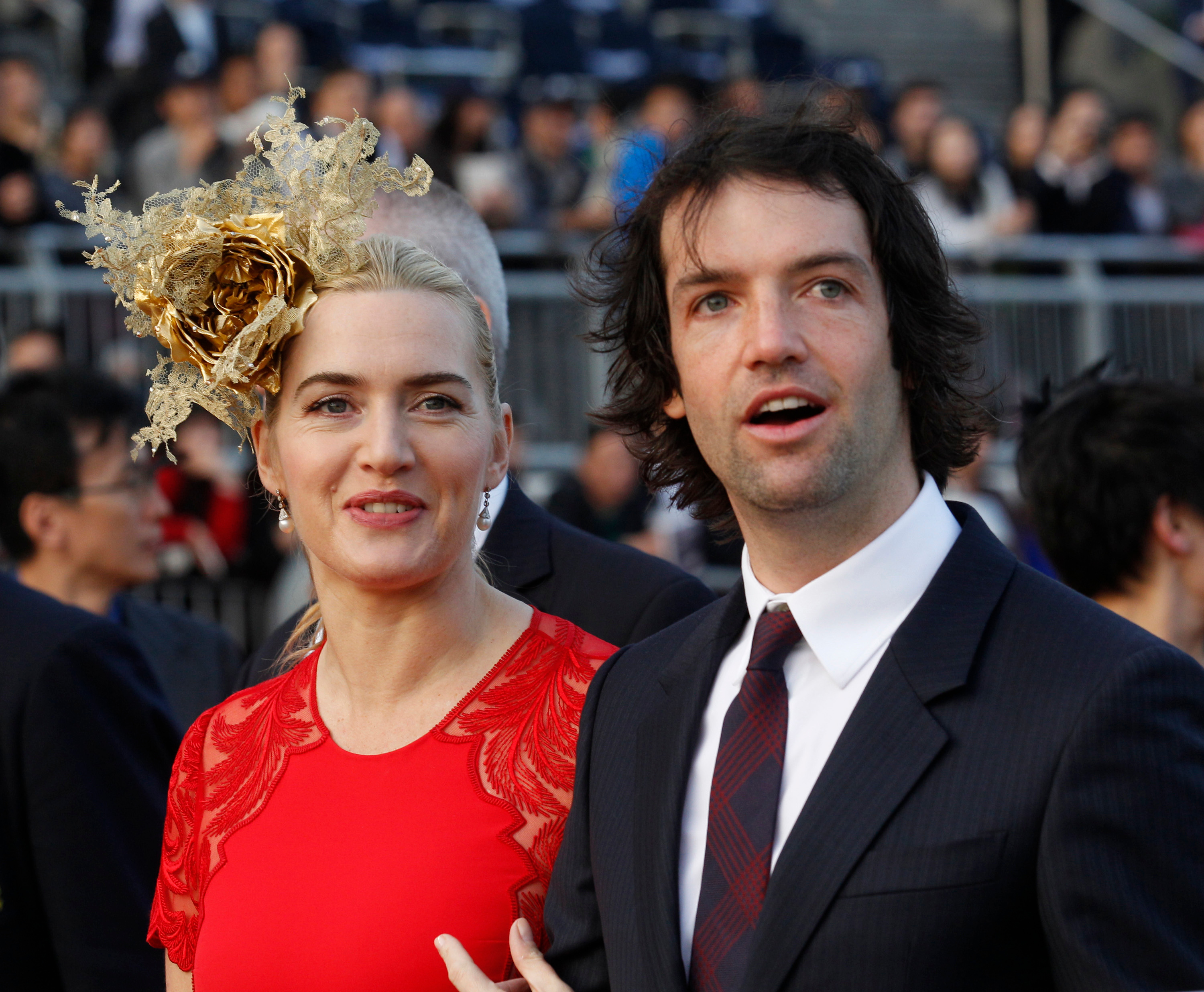 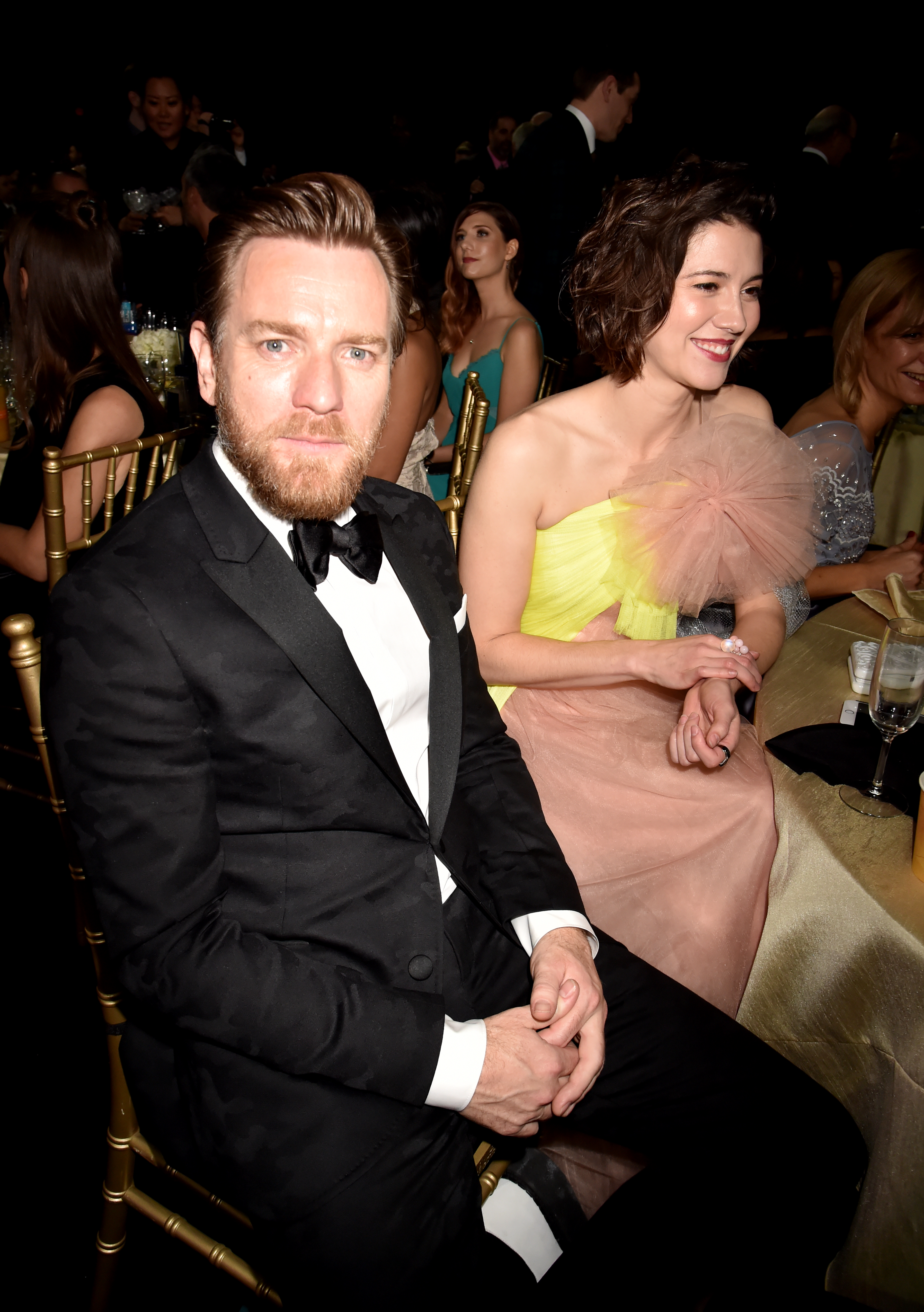 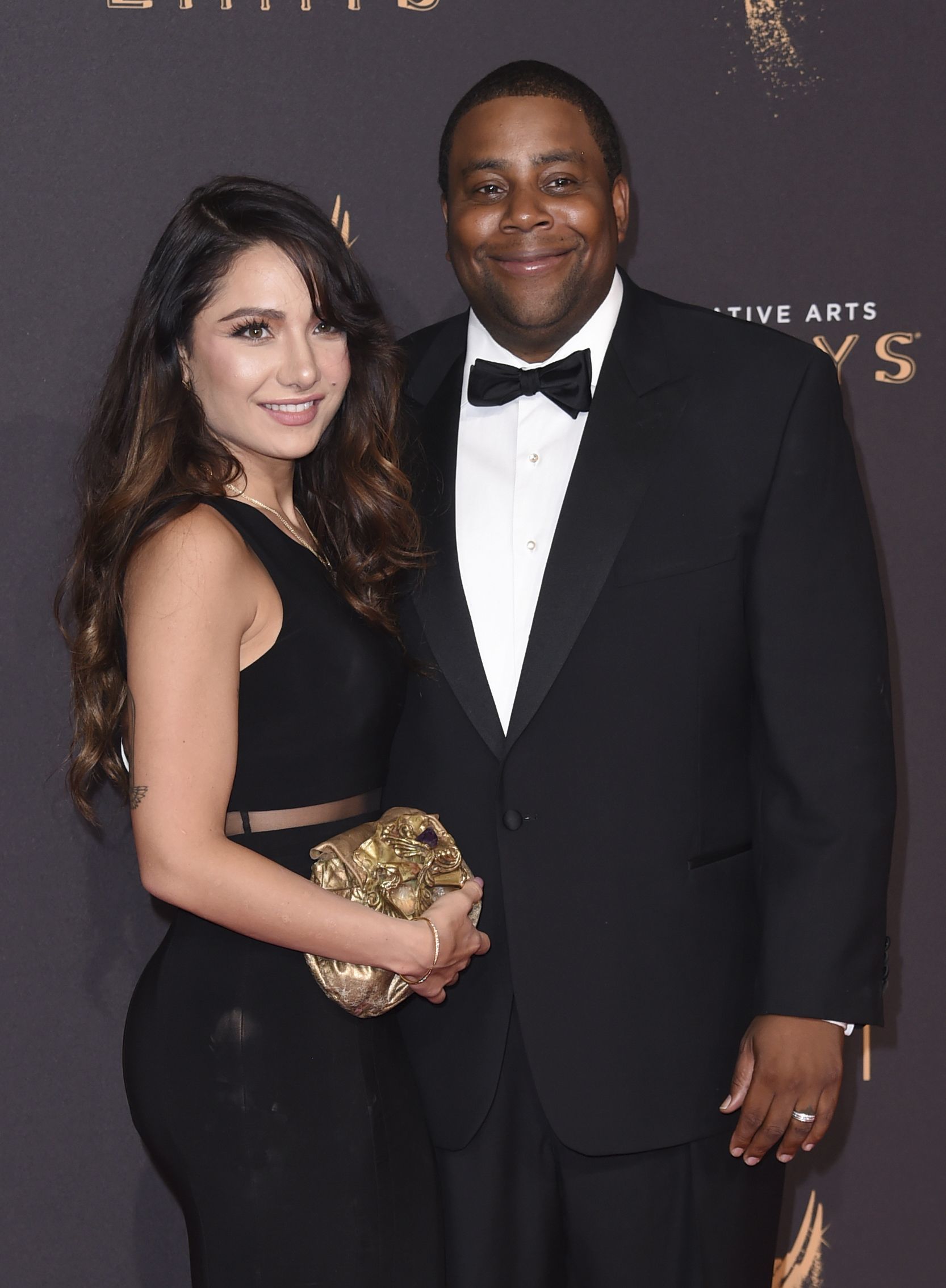 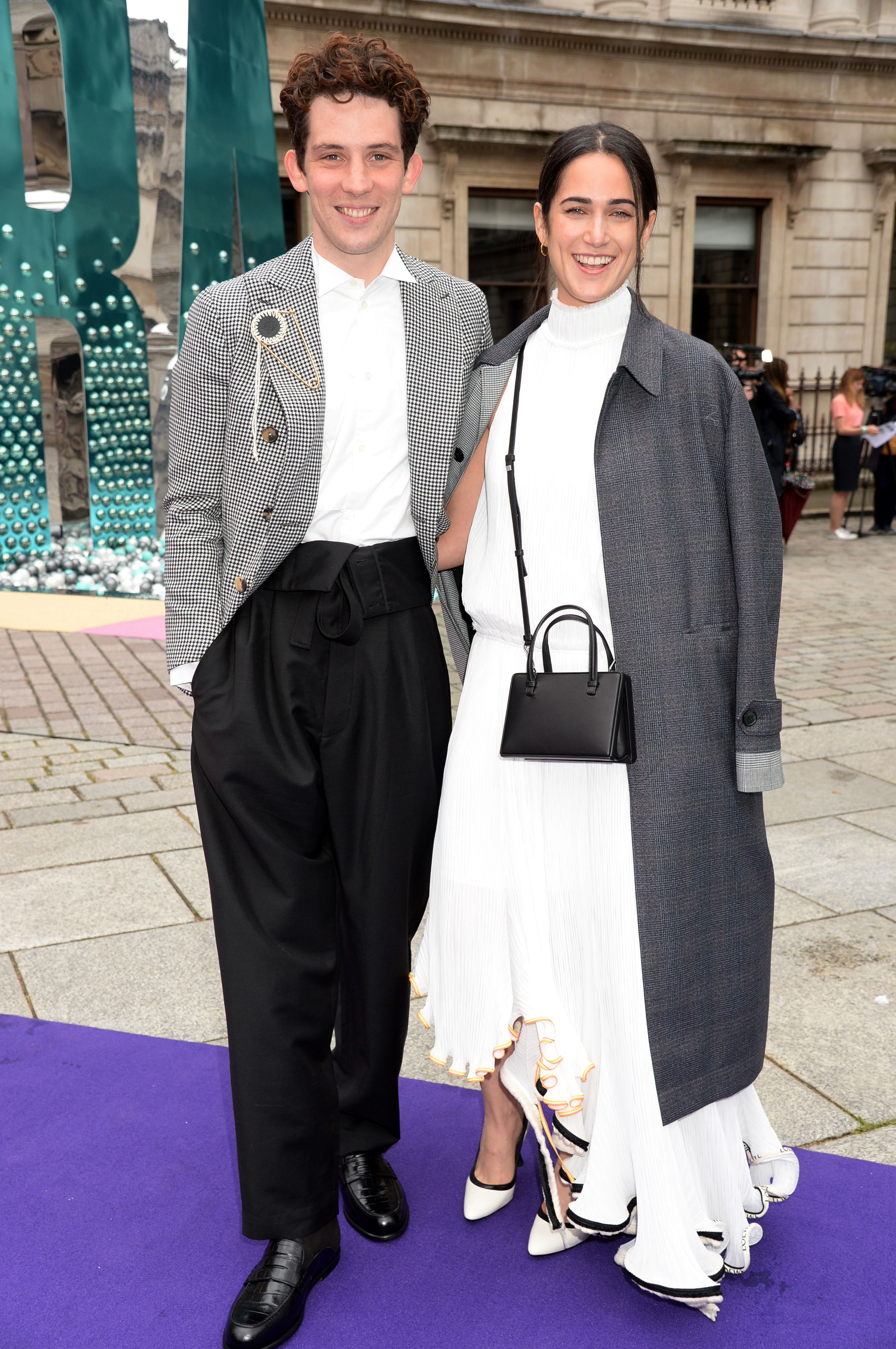 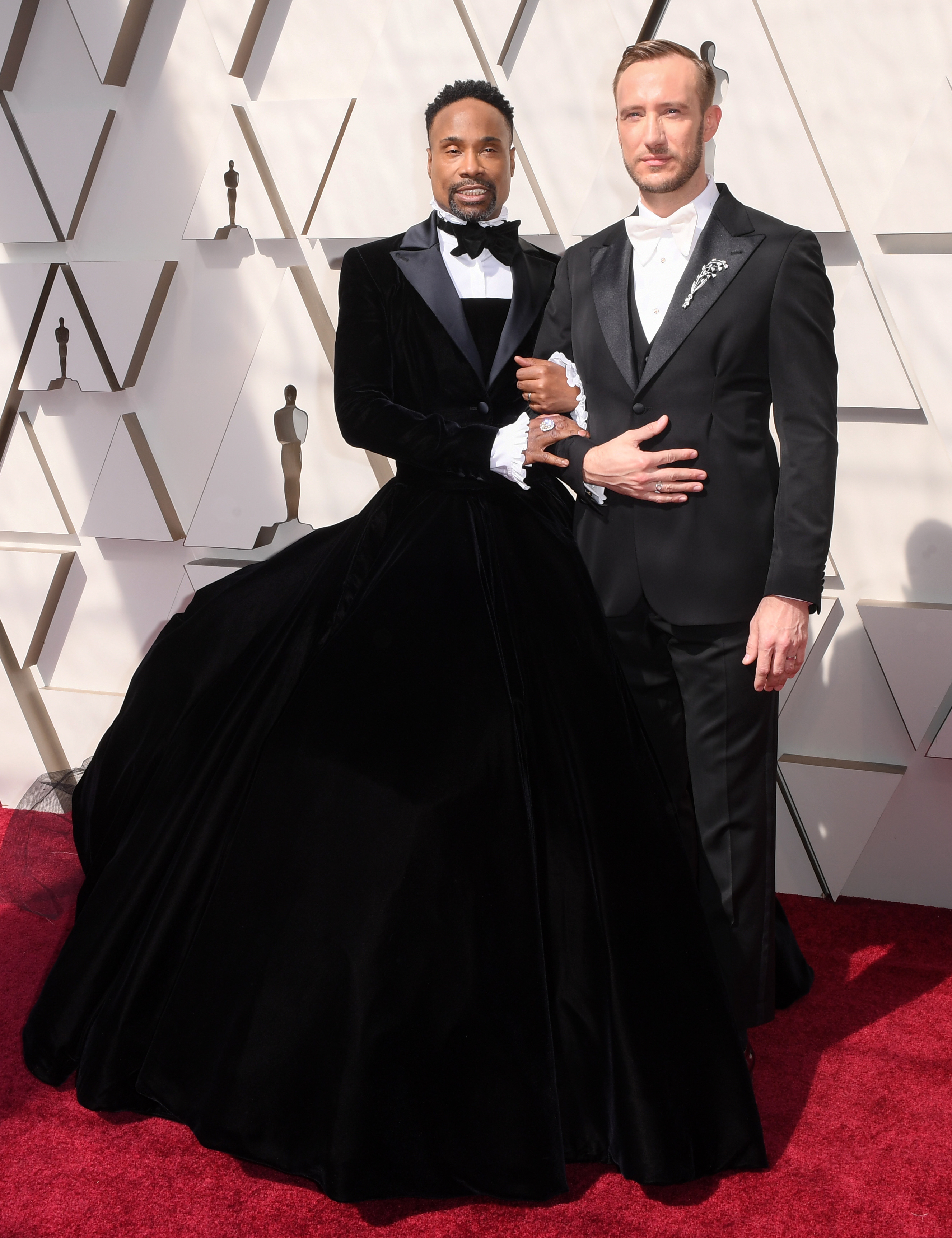 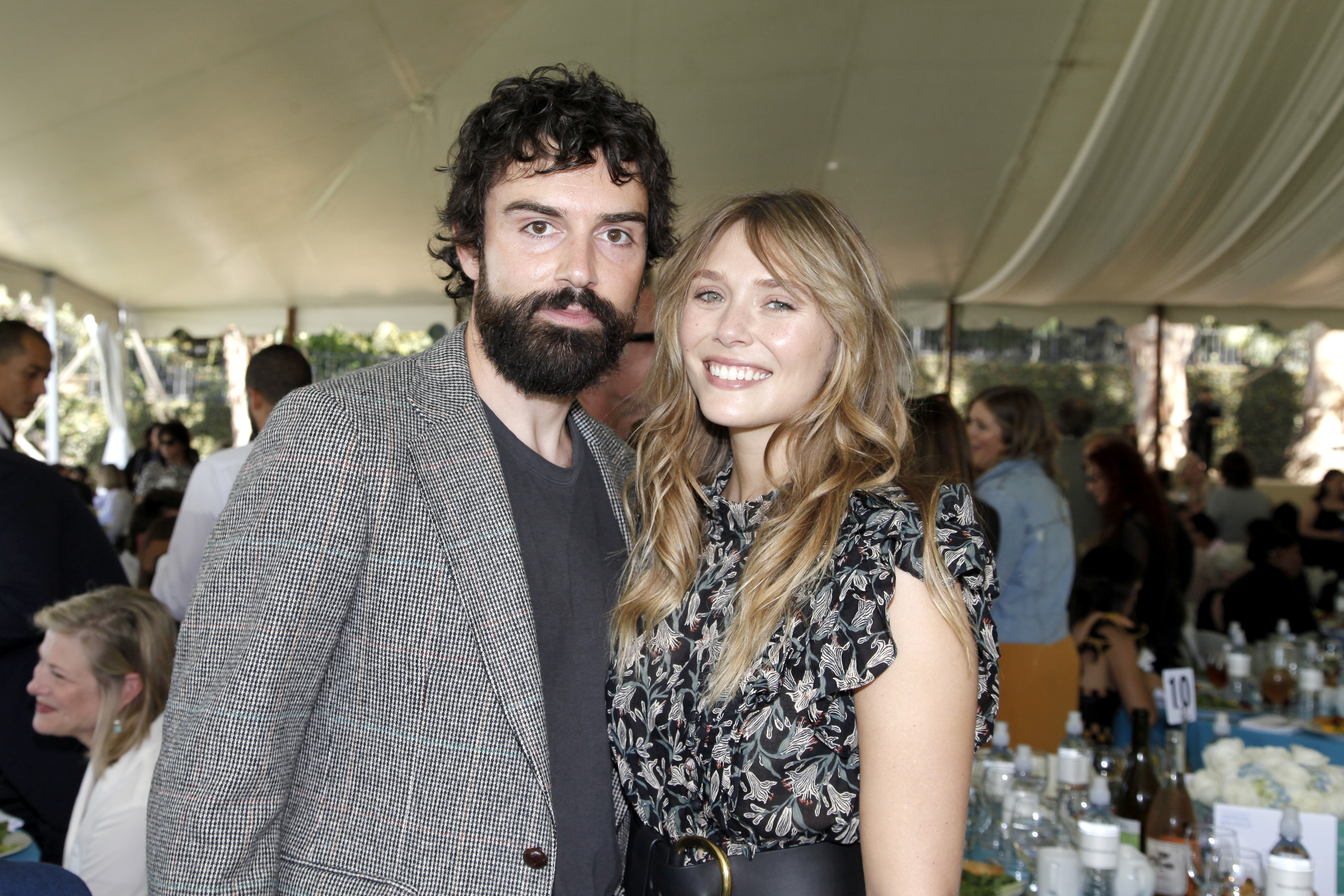 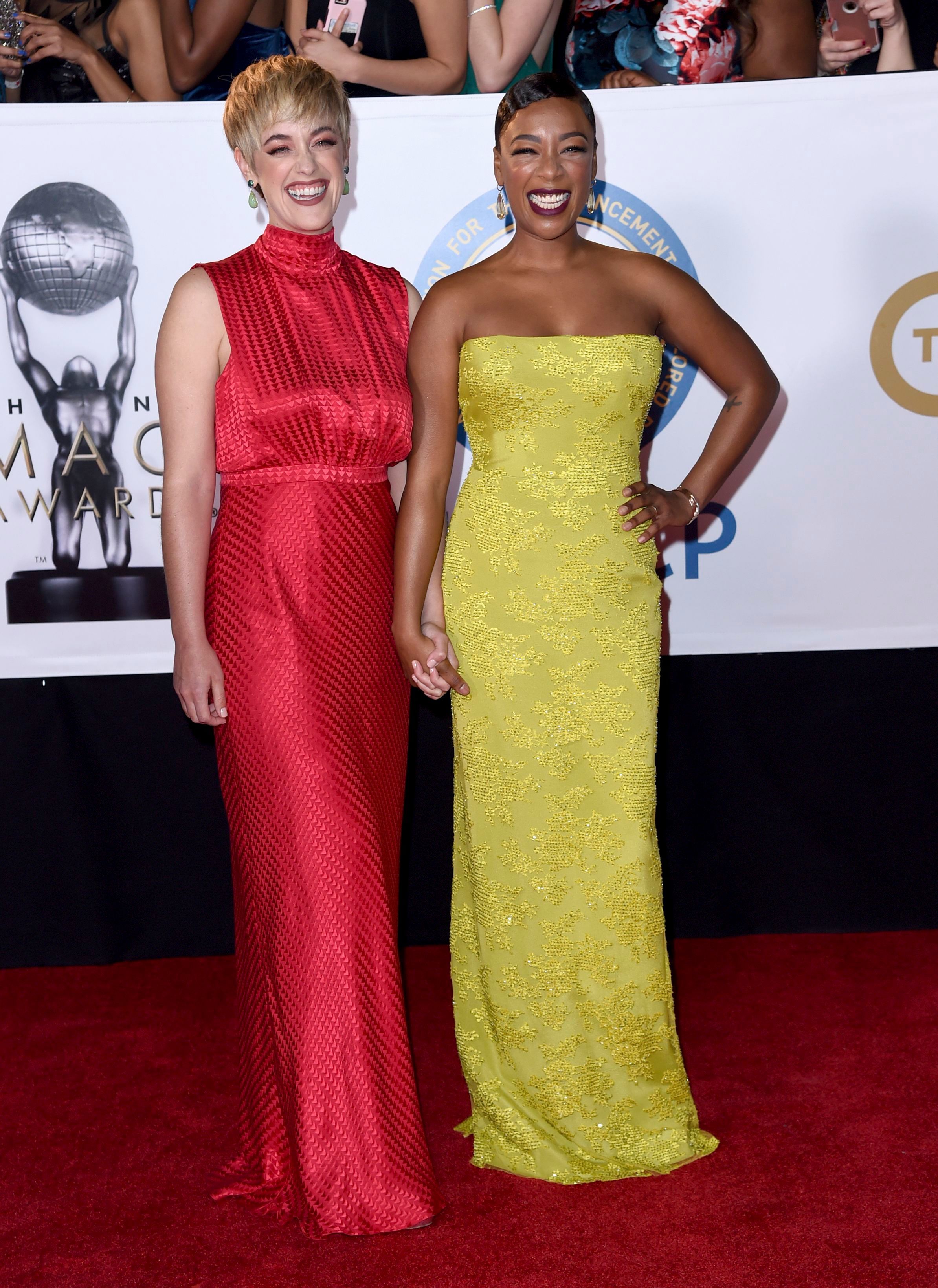 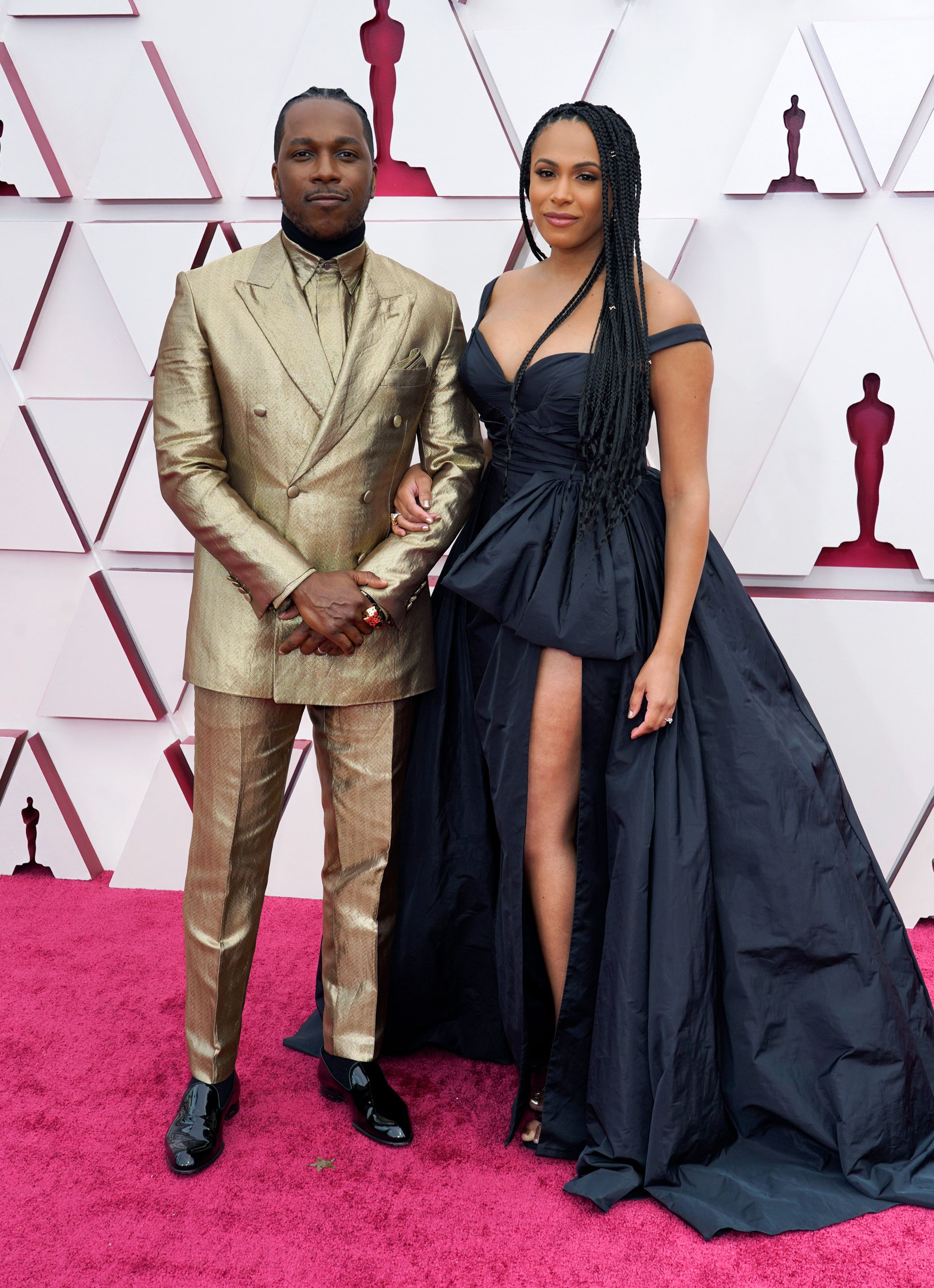 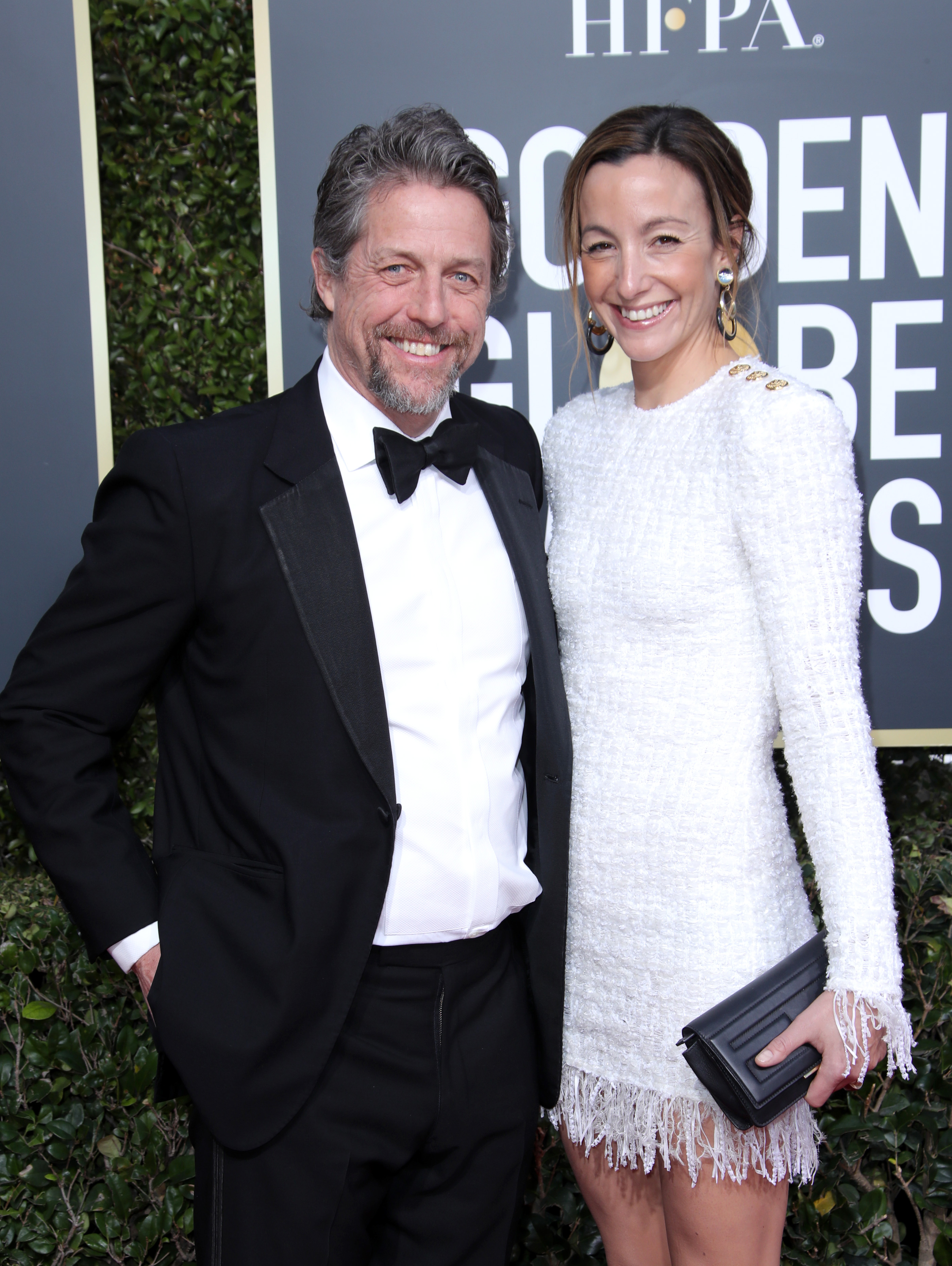 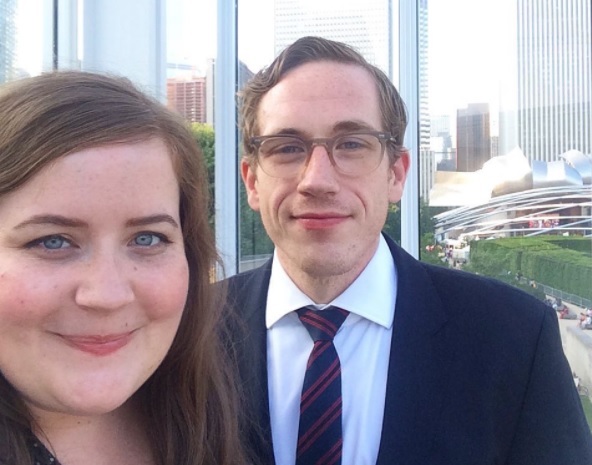 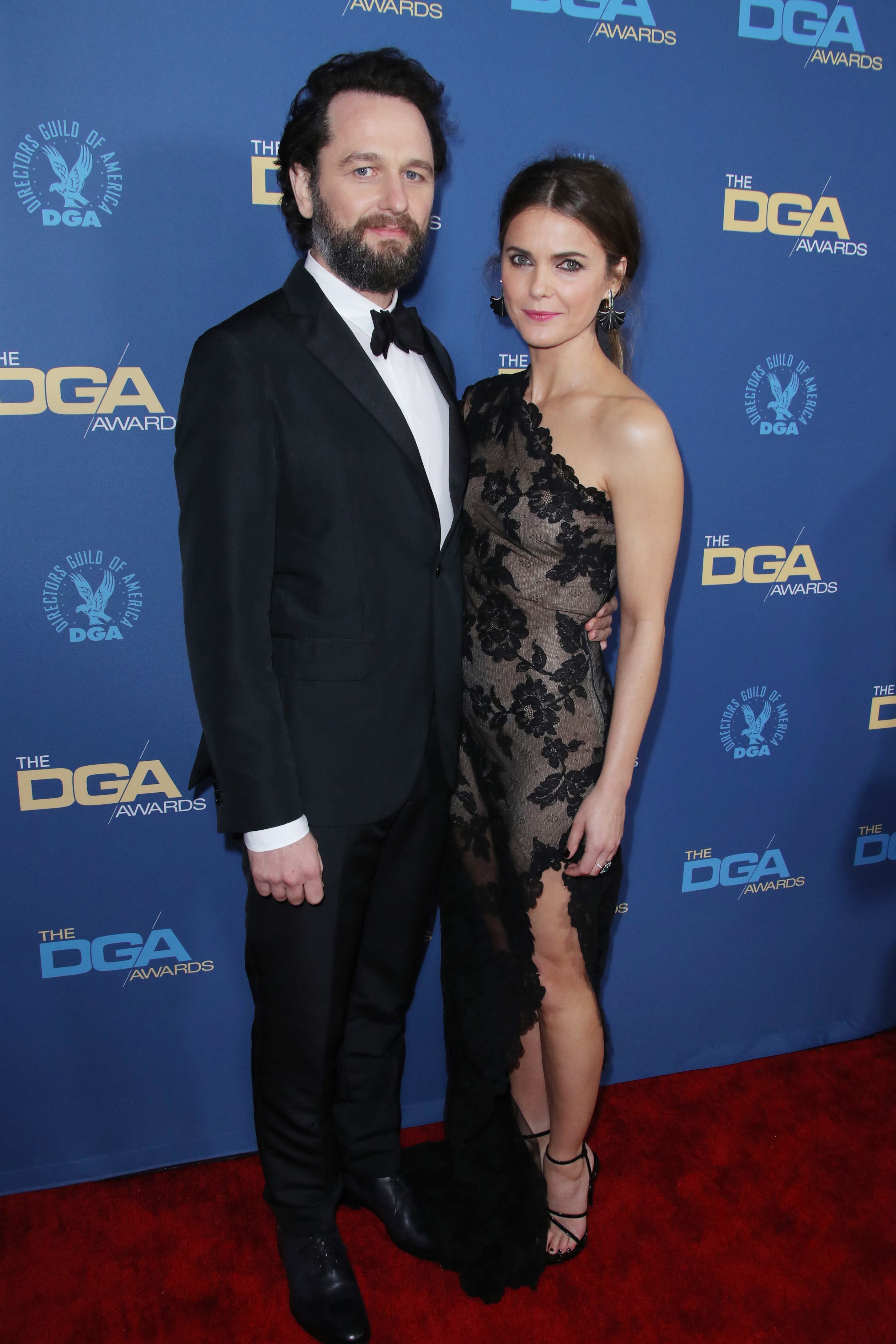 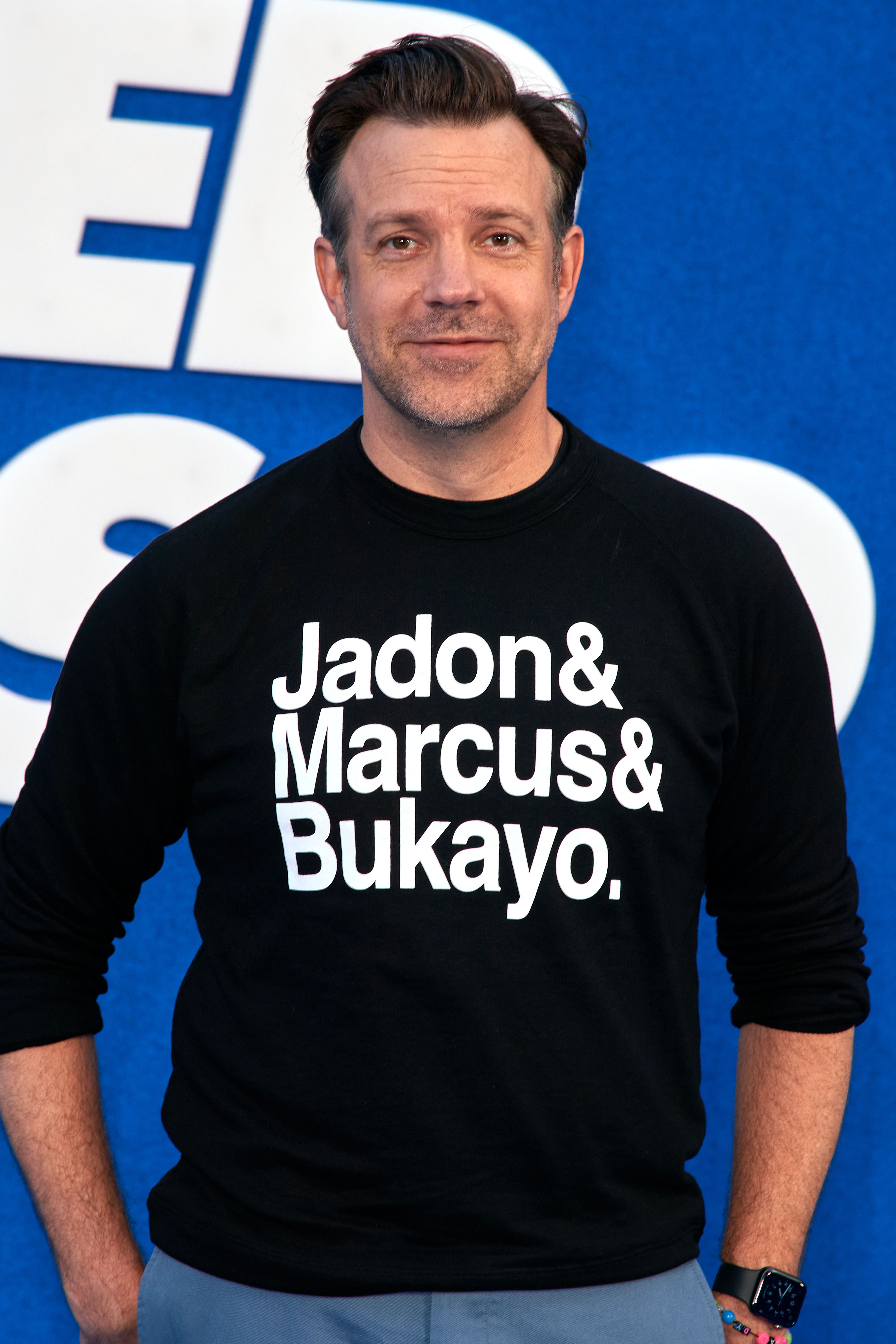