One of the largest events on the Australian music calendar, the Tamworth Country Music Festival, looks set to be cancelled in 2021.

Tamworth Regional Council staff have recommended that all council-run events for the festival, which was due to take place from January 15 to 24, be suspended with a formal vote to take place next week.

The move would scupper the 49th iteration of the festival, which brings about 50,000 people and $50 million to the regional NSW town each year. The cancellation is another blow to the music industry which has been crushed by the coronavirus pandemic, local and international border restrictions and social distancing regulations. 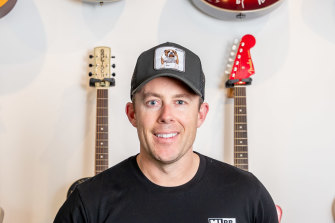 Musician Casey Barnes is disappointed Tamworth will likely be cancelled in January.Credit: Supplied

Queensland country musician Casey Barnes, who has performed at the festival several times, said artists and fans had no choice but to "roll with the punches".

"We all had a feeling Tamworth might be the next one to go and largely because of the border closures," Barnes said. "There’s a heap of us up here in Queensland that won’t be able to get down. On the Gold Coast we’ve got me, Lee Kernaghan, Adam Brand and a few others, all based here in south east Queensland and we literally won’t be able to get there, so it’s a real shame."

Barnes, who released an album in April and has been forced to cancel all his 2020 shows, said "it's been a year of one thing after another".

"You’ve just got to try and stay positive … the biggest thing we can do this year is adapt to things as much as we can. The great thing about the country music community is they’re such a great, supportive bunch of people."

Country Music Association of Australia chairman Dan Biddle said The Golden Guitar awards, also in their 49th year, would go ahead via livestream.

"The artists have worked too hard to put releases out this year and we need to acknowledge them and continue that long history," Mr Biddle said.

He said the council had been considering the future of the 2021 festival for months, but the latest medical advice meant the event could not go proceed.

"Just about every element that the council is responsible for in January requires massing large crowds, and this we can’t do,” Cr Harley said. "This includes things like the cavalcade, busking, the street stallholders, the free stages and just about every other element.”

Cr Harley said the council would officially meet to discuss the issue on September 8.

"The number one consideration is the health and well-being of our community, our industry and our fans," Cr Harley said. "To that end, we are recommending that Tamworth should not proceed with the country music festival in 2021."

"It’s pretty tough," Barnes said. "We’ll push on and try and do some COVID friendly shows in September and October but it’s not the same as getting in front of a big festival crowd like Tamworth."