Home » Lifestyle » After nearly a decade, Libbi Gorr hangs up the Sunday headphones

After nearly a decade, Libbi Gorr hangs up the Sunday headphones

For years, Libbi Gorr has had two Sunday morning routines: a walk around the Tan, talking about life with a close friend, followed by a 10am appointment on ABC radio with her loyal family of listeners.

After this weekend, only one of those routines will endure. 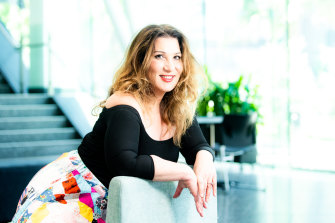 Gorr will wrap her nine-year run at the helm of ABC’s This Weekend Life on Sunday.Credit:Justin McManus

On Sunday at noon, Gorr will wrap her nine-year run at the helm of This Weekend Life in ABC Melbourne’s 10am-12pm slot. She is ready to explore new creative horizons — though she says she is not yet entirely sure what they might be.

Whatever she does, she is happy to be a role model for women ready to embrace a third act in their late 50s.

“I’m in this new bracket of middle age whereby we are young enough to have another go but old enough to know better,” she says. “And so I have to have a crack. I think I’ve always been driven by the creative nugget, the creative kernel.”

She recalls The Hot Bagels – a late 80s singing-and-comedy girl group – and her most famous comedic creation, Elle McFeast, who made Gorr a household name.

We’ve been through something together and it’s changed us and the bandages have only just come off so we’ll see how we’ve changed.

“The Bagels… it was just fun but it had its point. McFeast, that was another creative kernel that turned into something big. This Weekend Life was about my love of the human condition, and it really anchored me to people and what made the stuff of human life. I never expected to be doing a wondrous thing like a gardening segment and to be anchored in their home and in their hearth and in their hearts. Never in my wildest dreams.”

Since 2012, Gorr has done gardening segments and much else besides. Listening to her every Saturday and Sunday morning is like joining a gathering of friends under the host’s gently empathetic and wryly amusing guidance. Broadcasting in the world’s most locked-down metropolis during the pandemic, she has been grateful both to have the regular work and to be able to connect with her hometown community in the city’s hardest days.

“We never knew what the temperature of the [audience] was going to be,” she says of the past two years. “We never knew how people were feeling. I learned that everybody craves connection and I learned that people can be incredibly kind. I think there’s a pain that we suffered as Melbourne that is unique. We’ve been through something together and it’s changed us and the bandages have only just come off so we’ll see how we’ve changed.”

For Gorr, there was also a personal tragedy unfolding in the shadow of the COVID crisis. In September, her elder brother Jon was killed in a road accident in Allansford, near Warrnambool.

To mark her final show, Gorr has invited her listeners to do what she does every Sunday morning – grab a friend and walk around the Tan. Then she will go into the ABC studios at Southbank to say her last goodbye. She says it will just be a normal show despite the occasion.

But will there be tears, as there were when she broke the news on-air last Saturday?

“I didn’t mean [to cry] but … you know when you know something that nobody else knows? You want to say it right. It’s important for me to communicate how much this chapter has meant to me. It has made me a whole human being.”