Agatha Christies marvellous gift to grandson Mathew: the rights to The Mousetrap 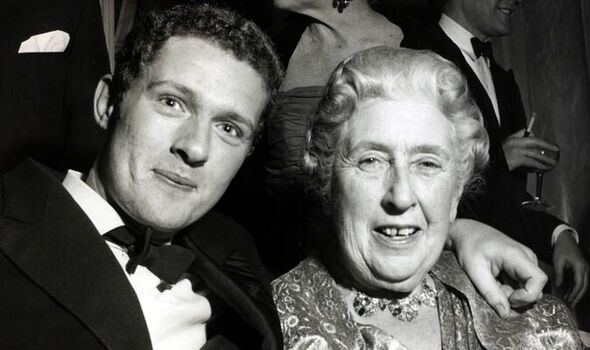 “Nobody realised until much later,” he says, “what a marvellous gift it was. But it’s worth remembering that my grandmother had been through many times in her life when money was not plentiful.”

The grandmother in question was Agatha Christie. And that generous gift bestowed upon her only grandchild was the rights to her play The Mousetrap.

The year was 1952, and Mathew would probably have preferred a train set or a cricket bat for his birthday. And there was little indication then that his grandmother would very soon become the most famous and successful detective fiction writer in the world. Her books were selling, but not in the vast numbers they later enjoyed.

Unsurprisingly, no one is revealing how much Mathew has earned down the years from royalties for the performing rights of the play. But it is known that he’s donated generously to a clutch of charities for the arts and other causes, especially in Wales.

Through his trust he has given substantial amounts, and once told the BBC he thought it was “at least a million pounds”.

A successful producer of films (Poirot, Death On The Nile), Mathew, now 78, recalls going with his grandmother to see what turned into the world’s longest-running play.

“I went to The Mousetrap several times with her in varying company – in family parties, with girlfriends and with the Eton cricket team when I was captain in 1962.”

What sticks more clearly in his mind, he says, is his grandmother’s other ninth birthday gift, a bicycle.

Christie herself did not expect The Mousetrap to enjoy a long run. In her autobiography, she recalls a conversation that she had with the original producer, the late Peter Saunders. “I give it 14 months,” said Saunders. To which Christie replied: “It won’t run that long. Eight months perhaps.”

After it broke the record for longest run of a play in theWest End, Christie received a jokingly grudging telegram from playwright Noël Coward: “Much as it pains me, I really must congratulate you?” It’s a classic whodunit.

As news spreads of a murder in London, a group of seven strangers find themselves snowed in at Monkswell Manor, a countryside guesthouse. When a police sergeant arrives, the guests discover – to their horror – that a killer is in their midst.

The original West End cast included Richard Attenborough as Detective Sergeant Trotter and his wife Sheila Sim as Mollie Ralston. They took a 10 per cent profit-participation in the production, paid for out of their combined weekly salary.

“It proved to be the wisest business decision I’ve ever made,” said the late actor and film director subsequently, “but foolishly I sold some of my share to open a shortlived Mayfair restaurant called The Little Elephant and, later still, disposed of the remainder in order to keep my film, Gandhi, afloat.”

Last November Sam Ebenezer, 27, took over the role of Trotter in the current West End production. “It’s a terrific part,” he says.

“In a way, I’m like a member of the audience apparently going through the paces of trying to work out the identity of the killer.”

It’s also a great bit of escapism. “Yes, it’s a murder mystery but it’s often very funny, too. The TV news is so grim right now, I think people like getting immersed in a story that has a satisfying ending.”

Nicole Agada, 30, loves playing Mollie, she says. “In many ways, I identify with her. She ta h takes charge; she’s the woman of the house. But, of course, she was created in the early 50s and the world has moved on. I have to remind myself not m to react as a modern woman. Back then, the man always had the final say. Those were different times.

“Winston Churchill was Prime Minister. Hitler had only been dead for seven years. And yet, the play is still running today. Incredible. But then Agatha Christie’s gift was timeless.”

Nine years ago, Adam Spiegel produced the first UK tour of The Mousetrap and then acquired the long-running West End production in 2018. “To my mind,” he says, “it’s London’s theatrical crown jewels.”

And yet, to the casual glance, it’s a creaky old thing set in ration book Britain, a show that started when the Queen ascended to the throne in 1952 and which will celebrate its 70th birthday in September.

With that in mind, Spiegel is sending The Mousetrap on tour again, this time to 70 different venues – from Dublin to Derby, from Blackpool to Bristol, from Norwich to Newcastle – for the rest of this year, all through 2023 and into 2024.

How does he explain its enduring appeal?

“Agatha Christie is the highest-selling author of all time behind only Shakespeare and the Bible. Estimates vary but her sales fall somewhere between two and four billion books.” And The Mousetrap, he argues, is an extremely well-constructed play.

“Yes, it’s a period piece but, when people ” go to the theatre, they’re not always searching for the avant-garde. Sometimes, What you want is a satisfying whodunit.”

Spiegel, 54, first saw The Mousetrap as a child. “Proof that the play continues to exert a fascination is illustrated by the fact that people go to see it as children, then as parents and finally gra as grandparents. For thousands and thousands of young people, their very first experience of live theatre is watching The Mousetrap.”

Janet Hudson-Holt is equally enthusiastic. When she became its wardrobe supervisor ” and costume designer in 2002, the play had already clocked up its half-century of continuous performances in theWest End.

Originally, of course, the clothes were contemporary but, by the millennium, Janet’s challenge was to source outfits appropriate for the early 50s – and that was and is no mean task, particularly since there is a total change of cast every six months. “It means I have to be careful. If

I had everything made for each new actor, the cost would be prohibitive. But as it’s English country style, I can often buy the right outfits – particularly for the men – because you can still get hold of classic tweedy suits and jackets.

“There are traditional tailoring companies that continue to stock those items.”

Janet, 58, tends not to frequent secondhand shops, she says, because the clothes are less likely to wear well.

“A suit, for example, has got to last for about 400 performances.”

Some of the women’s wear, however, has to be made to measure.

“The leading lady, Mollie, for instance, wears a 50s-style day dress that you simply wouldn’t be able to find now. It’s mid-blue with three-quarter length sleeves, button-through with a full skirt and a trim on both the sleeves and the collar. And, of course, each actress in that role is a different shape and size so it’s not as though the dress can be handed on.”

Many anecdotes have attached themselves to this evergreen theatrical institution, some apocryphal, some not. A favourite is that of the London cabbie and the bombastic American tourist.

Having hailed a taxi and instructed the driver to take him to the St Martin’s Theatre, the passenger kept up a constant stream of critical invective about the cabbie’s chosen route and the speed at which they were travelling.

When the American was eventually deposited outside The Mousetrap, he gave the driver the exact fare but no tip.

As he approached the foyer, the cabbie beckoned him back. “By the way,” he called out of his window, “I know whodunit.”

And proceeded to tell him.