The United States Army has identified the five American soldiers who were killed in a helicopter crash in Egypt on Thursday. The incident occurred during a peacekeeping mission for the Multinational Force and Observers, an international force that monitors the Israeli-Egyptian peace agreement.

Seven peacekeepers, including five Americans, were killed when one of its UH-60 Black Hawk helicopters crashed during a routine mission in Egypt’s Sinai Peninsula. An eighth peacekeeper, also an American, was badly injured.

The deceased soldiers were identified Saturday as: 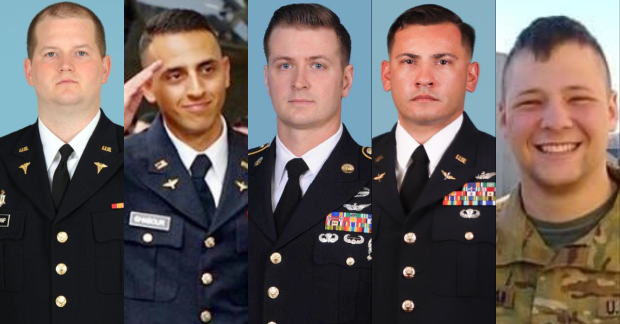 The MFO said a French peacekeeper and Czech member of the force were also killed. It did not release the names of the dead, pending notification of their families.

The incident is under investigation, but it appears it may have been related to a mechanical issue, according to the army.

“A full investigation of the cause of the crash, which appears to be mechanical in nature, has been launched,” the force said on Thursday, thanking Egypt and Israel for their cooperation. The MFO previously said eight people, including six Americans, had died, but it later revised its numbers down.

The MFO said the helicopter crashed during a routine mission near Sharm el-Sheikh, a popular Egyptian resort city on the Red Sea. It has not given a precise location of the crash or said whether the helicopter fell on land or crashed into the sea.