Ascension Day marks the 40th day of Easter, bringing the religious period to a close for another year. Many Christian countries recognise the date as a public holiday such is its importance to their faith. But while Good Friday and Easter Monday are both public holidays in the UK, Ascension Day is not. And the feast day is not as significant for some parishioners despite it being a pivotal moment in the life of Jesus.

What happened to Jesus on Ascension Day?

As the name indicates, Ascension Day describes the day of Jesus’s ascension into heaven 40 days after his resurrection on Easter Sunday.

After rising from the dead, Christ spent his final few weeks on Earth passing on his teachings to his disciples.

He then led them up to the Mount of Olive in Jerusalem, where he said the time had come for him to be returned to God. 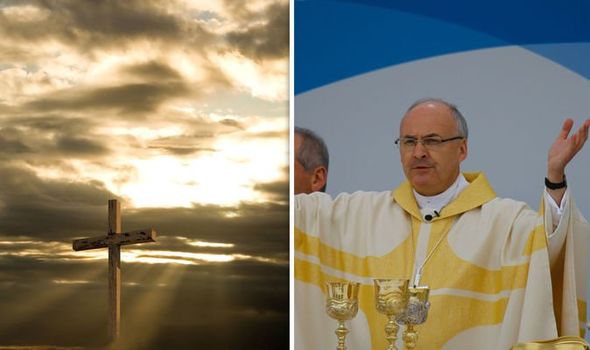 Acts: 1:1-11 says: “Then they gathered around him and asked him, ‘Lord, are you at this time going to restore the kingdom to Israel?’

“‘He said to them: ‘It is not for you to know the times or dates the Father has set by his own authority.

“‘But you will receive power when the Holy Spirit comes on you; and you will be my witnesses in Jerusalem, and in all Judea and Samaria, and to the ends of the earth.’

“After he said this, he was taken up before their very eyes, and a cloud hid him from their sight.” 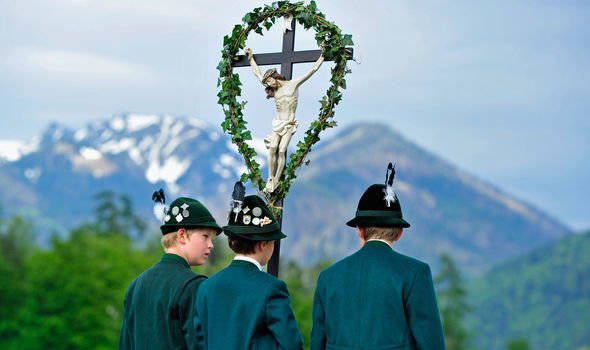 The King James Bible states after Jesus disappeared, two angels descended from above and said to his followers: “Ye men of Galilee, why stand ye gazing up into heaven?

“This same Jesus, which is taken up from you into heaven, shall so come in like manner as ye have seen him go into heaven.”

What do people do to mark Ascension Day?

Ascension Day 2019 falls on Wednesday, May 29 and will traditionally be marked by Christians attending church services.

Catholics may hold their Ascension Day services on a Sunday instead as the day off work enables more parishioners to attend mass. 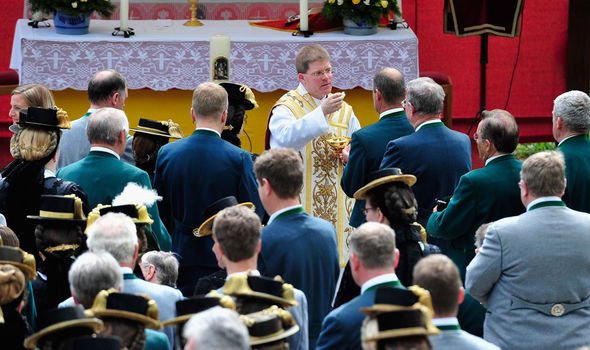 Ascension Day is a public holiday in several European nations.

In Germany, the day is also known as Father’s Day, and chance to honour manhood

This can involve a walk in the country but it often means drinking lots of alcohol too.

Elsewhere, some parts of the country will hold processions in fields to mark Jesus’s ascension into heaven.

People in The Netherlands and France also use the festival to get together with loved ones or enjoy the spring weather.