Australia days away from 80pc double vaxxed but some states lagging

Australia is days away from reaching the double vaccination milestone of 80 per cent, but a national move into the next phase of reopening remains in doubt with several states far behind on immunisations.

While Queensland, Western Australia and the Northern Territory have all only fully vaccinated about 65 per cent of their eligible populations, heavily-vaccinated NSW and Victoria are teaming up to push for more detail on the booster shot program and vaccinations for young children. 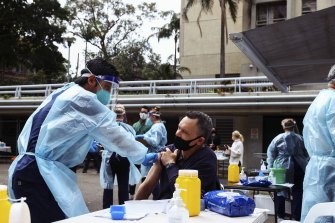 Booster shots will be discussed at the national cabinet meeting on Friday.Credit:Dominic Lorrimer

In the first national cabinet meeting since the start of October, international borders and an update on testing and quarantine measures will be top items on the agenda, with 79.1 per cent of the eligible population aged 16 and up now fully vaccinated.

“We will pass the double-dosed 80 per cent rate in the coming few days,” Health Minister Greg Hunt said on Thursday.

Under the national pandemic recovery plan, once the country reaches 80 per cent double vaccinated restrictions can ease further in states that have also reached the threshold. The “consolidation” phase of reopening includes extending the international travel bubble and exempting all vaccinated residents from any domestic restrictions.

Victorian Premier Daniel Andrews said he was teaming up with NSW Premier Dominic Perrottet to put a number of issues before Prime Minister Scott Morrison. NSW and Victoria have double vaccination rates of 89.1 per cent and 82.6 per cent respectively, while both states continue to record hundreds of new coronavirus cases each day.

“It isn’t over here, it’s not over in NSW. It’s not over anywhere really, until we get boosters in people’s arms,” Mr Andrews said on Thursday.

Vaccinations for children aged five to 11 is also a topic of interest in both states, with NSW Health Minister Brad Hazzard saying in estimates on Thursday he believed vaccines would be a “game changer” for younger kids.

Mr Andrews hoped the federal government would be making an announcement “quite soon” about vaccinating five to 11-year-olds, preferably before the end of the school year.

Less than a week after Pfizer was approved for use as a booster shot, more than 100,000 people have come forward for that third dose, Mr Hunt said.

The Therapeutic Goods Administration has also already started looking at data from Pfizer on its vaccine in five to 11-year-olds. Last week TGA boss Professor John Skerritt said the regulator was waiting on the company to send the rest of its data, but the vaccine could be approved for use in young children by the end of the month.

Mr Hunt told reporters on Thursday there were enough doses to start vaccinating children as soon as it’s been given the green light.

“We’re ready, as soon as the medical regulator is ready and they’ve done all of the work to ensure that it’s safe and effective, we have the doses; we have the distribution system,” he said.

National cabinet will again discuss how the health system will cope with an expected increase in COVID-19 cases as well as their normal work as the country continues to open up.

Opposition health spokesman Mark Butler said Prime Minister Scott Morrison has been sitting on the hospital capacity modelling since September and it was past time for it to be released.

“Nurses and doctors deserve to know what is coming down the path,” he said on Thursday afternoon.

Australian Medical Association President Dr Omar Khorshid said it was important to assure the health community and the public that there was a plan for dealing with the inevitable rise in cases.

“We need to know how hospitals and the rest of the health system is going to be able to cope,” he said. “We also need to see what the government expects to happen with non COVID care during a future COVID outbreak.”

The childcare sector has also been hoping to get some more guidance on how to prevent and deal with outbreaks of the virus through health advice given to national cabinet. Children aged four and under make up about 6 per cent of the population, but they account for 19 per cent of unvaccinated Australians. Once five- to 11-year-olds are also vaccinated, the preschool age groups will be two-fifths of the unvaccinated population. Experts have warned childcare is likely to be the next frontline of the pandemic.

Government Services Minister Linda Reynolds told a Senate estimates hearing last week the Australian Health Protection Principals Committee was working on advice to leaders about ways to reduce transmission in childcare, similar to guidance it had given about schools. She said it would be “dealt with on 5 November”.

However, the only AHPPC advice on the agenda for discussion relates to mandatory vaccination for disability and homecare workers.

“Definitive statements about a number of areas can be beneficial for people so they don’t have to try and find the answer themselves and justify the answers to families in their communities,” she said.

80pc, AUSTRALIA, away, days, From
Celebrities