Australia is preparing to follow the United States in restricting non-essential gatherings in pubs, cinemas and restaurants on a city-by-city basis as the number of local coronavirus cases moves towards 500.

NSW and Victoria are set to be given powers to contain the spread of the virus by limiting gatherings of more than 100 people. The national cabinet, which is made up of Prime Minister Scott Morrison and the state and territory leaders, is likely to give enforcement powers to the states rather than impose an Australia-wide ban. 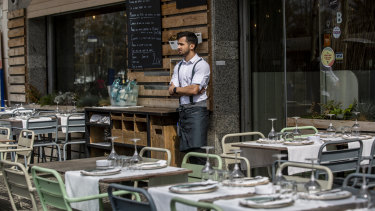 An employee stands at an empty cafe in Barcelona.Credit:Bloomberg

The measures could see bars and restaurants forced to close down in suburbs where there is a cluster of cases via person-to-person transmission, or be enforced Melbourne and Sydney-wide as the infection rate escalates.

The number of cases in Australia reached 448 on Tuesday, with 210 in NSW, 94 in Victoria and 78 in Queensland, and the government expects up to 1000 infections by the weekend.

Australia's chief medical and health officers will provide their recommendations to the national cabinet on Tuesday night after two days of meetings, with an announcement from the Prime Minister expected on Wednesday morning.

New York and Los Angeles have ordered all bars to close and restaurants to become take-away only. Spain and France have ordered their residents to stay home.

Non-essential gatherings of more than 500 people including concerts, AFL and NRL have been banned in Australia since Monday, triggering waves of cancellations across the entertainment, conference and sport industries.

Health Minister Greg Hunt said there needed to be collective and individual responsibility as the government ramped up social-distancing measures.

"All of this goes back to this message of flattening the curve by reducing the spread, where every Australian can be part of our national mission of helping to stop the spread and helping to protect the vulnerable," Mr Hunt said on Tuesday.

Widespread school closures are not being considered at this stage but have not been ruled out as the government tries to avoid having large numbers of parents in healthcare pulled out of the workforce for months, or children being looked after by more vulnerable grandparents.

Chief Medical Officer Brendan Murphy, who leads the health committee advising the national cabinet, said on Tuesday morning there was "no doubt" the nation would have to practice much more stringent social distancing if the community spread of the virus was to be controlled.

"It is now time to avoid hand shaking, to avoid non-essential travel, to try and avoid large groups and to do things like, if you can, work from home – all of those sorts of measures are really important," he said.

Aged care facilities are particularly vulnerable to the virus, with the mortality rate among people aged over 80 significantly higher than the rest of the population. Up to 15 per cent of this age group who contracted the virus in China died, according to its Centre for Disease Control and Prevention.

The national cabinet is expected to back the committee's recommendations on restricting visits to aged care centres on Tuesday night.