An expert has shared an amazing hack for mothers that instantly relaxes their newborn babies and helps ease and prevent their digestion issues.

Lucy Ross-Browne, a baby osteopath in Ferndown, Dorset, appears in a viral TikTok video showing mothers how to ‘create movement’ and clear painful wind in their baby’s tummies.

She reveals some of the simple ways parents can move a newborn to help soothe digestive discomfort by holding their torso and moving their tummy in a clockwise direction to stop milk pooling there and fermenting.

In another video she showed parents a move for ‘wiggling and dancing’ the baby’s bottom as you cradle them along your arm on their tummy.

In the video, the baby gurgled with happiness as he wiggled around and appeared to drop off to sleep in her arms. 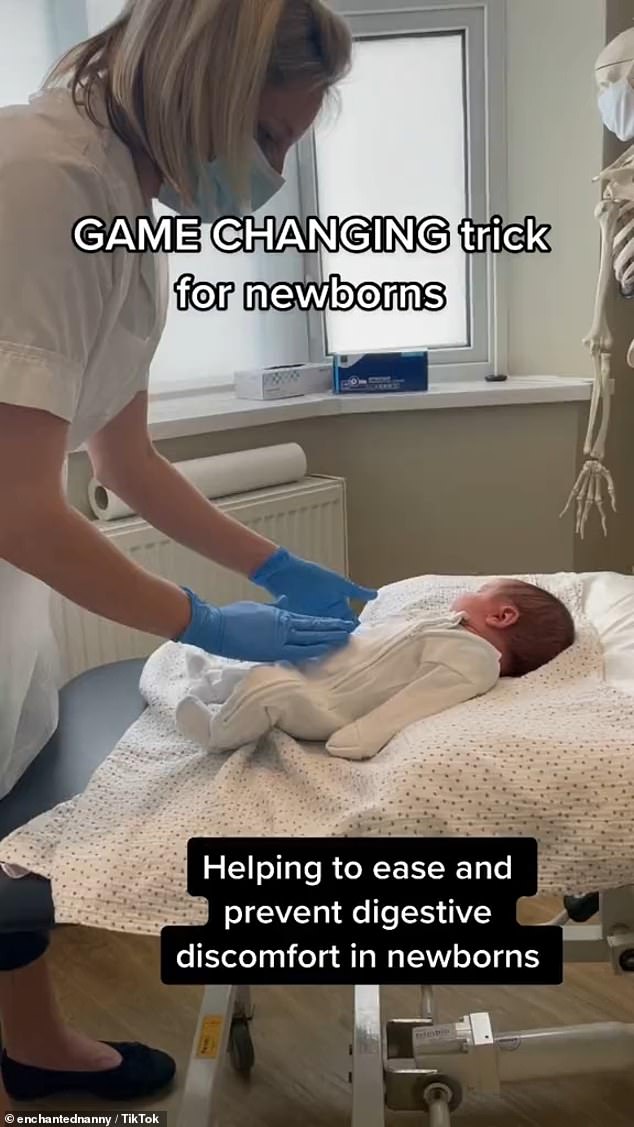 Lucy Ross-Browne, a baby osteopath in Dorset, appears in a TikTok video showing mothers how to ‘create movement’ to help soothe their baby’s milk digestion and clear painful wind

In the first video, titled ‘Game changing trick for newborns’, Lucy laid the baby out on the table on his back and pointed out one of the common mistakes parents make when they try to help their babies with wind.

‘What you see an awful lot of is people polishing their babies’ tummy, but that does absolutely nothing,’ she said. ‘What you want to do is create movement.’

The infant osteopath demonstrated the correct technique to move the baby – gripping the stomach and circling their body in a clockwise direction.

‘So what you want to do is hold him, with a nice wide grip, and we’re just going clockwise. Let them move with you.’ 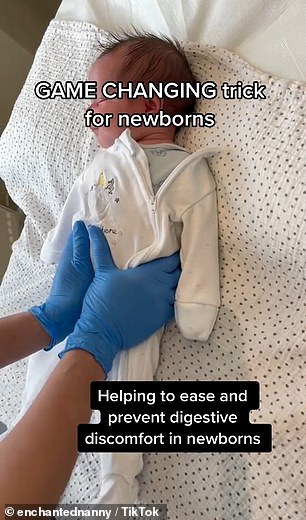 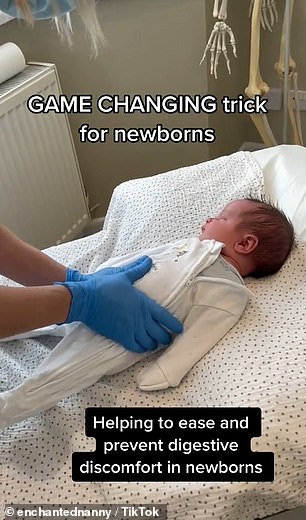 In the first video, she laid the baby on his back on the table and gripped his stomach with both hands (left) and then circled the baby’s body in a clockwise direction (right)

She explained: ‘If the tummy doesn’t have movement, then the milk gets a chance to sit and move too slowly through there.

‘And then it can ferment and produce wind in their tummy and that then is painful. So anything you can do to help move the milk round is going to help.’

The expert then held the baby by his bottom, lifting him up slightly and moving him in a figure of eight – making him stretch out and gurgle with happiness.

His mother, Danielle Manton-Kelly, who was watching and filming says: ‘I’ve never seen him stretch out like that – that’s amazing.’ 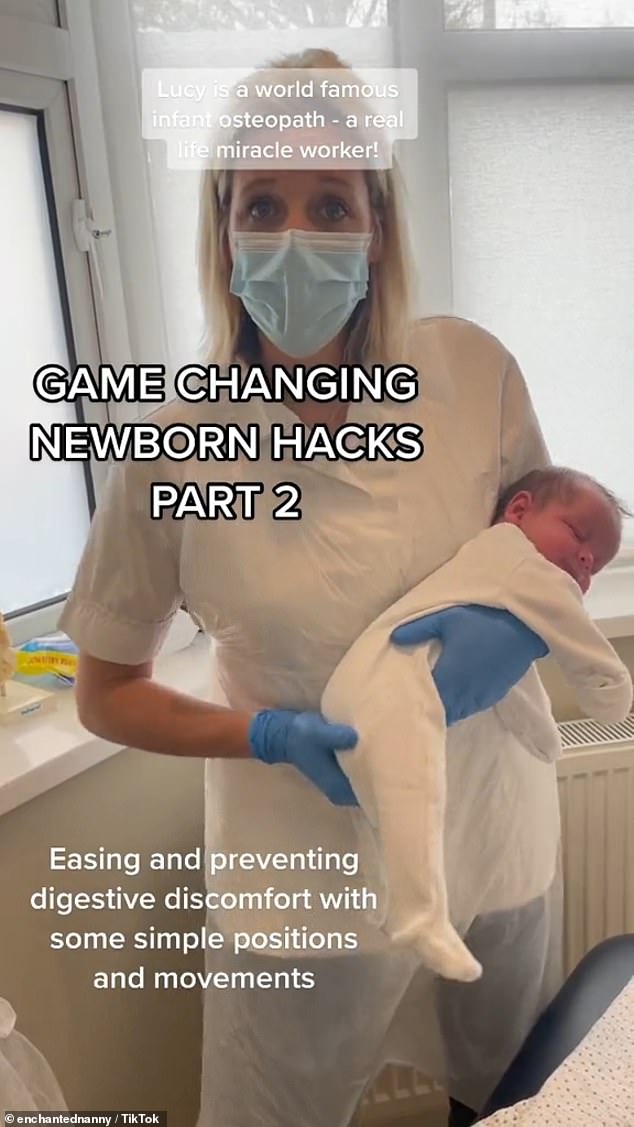 In a follow up TikTok video, shared to The Enchanted Nanny page, by Danielle, a mum-of-four from Dorchester, Lucy shared a second technique for parents to use.

The clip, which has 1.8 million views, showed Lucy picking up the baby boy and cradling him on his tummy along her arm.

She made sure he was stretched out on his stomach, with his arms and legs hanging down, before she began to wiggle and dance his bottom, explaining that the movement helps move milk along.

Lucy said: ‘When they’re not crawling and they’re not walking around, they need a bit of help with that movement.’ 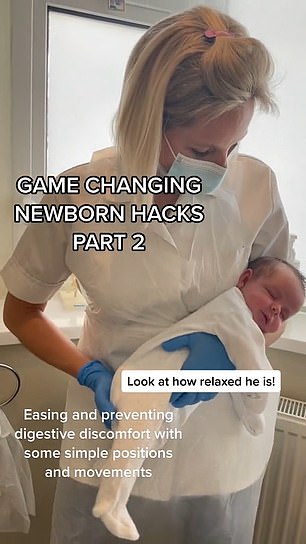 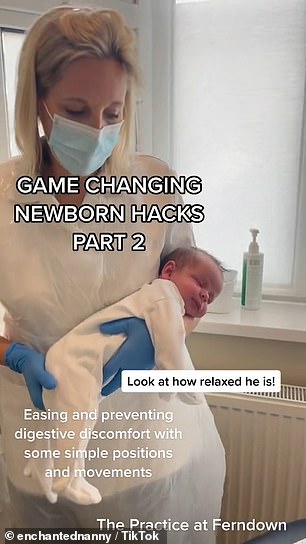 She made sure the baby was stretched out on his stomach, with his arms and legs hanging down, before she began to wiggle his bottom. The osteopath said to repeat the practice ‘intermittently through the day’ because the movement will help move milk along 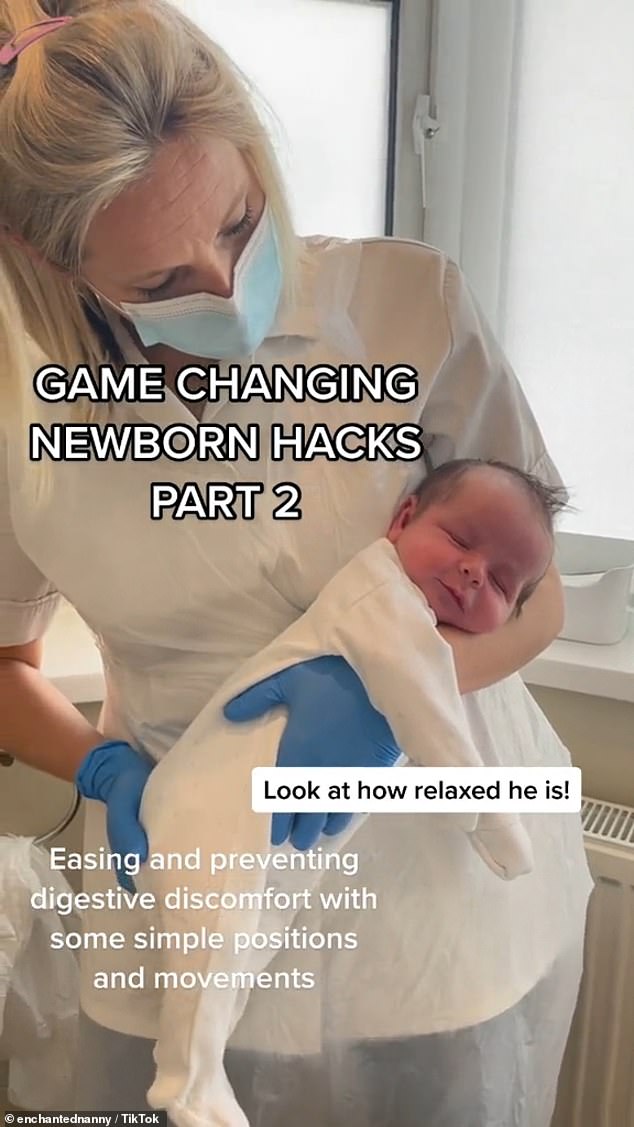 Danielle laughed at the the content look on her son’s face, saying: ‘He looks so happy. I have never seen him that relaxed.’

The osteopath said to repeat the practice ‘intermittently through the day’ as play time to give the babies a ‘helping hand’ with their tummy.

Amazed TikTok users flooded to the comments with one person writing: ‘Yes spot on!! My boys loved this too and it really does help tremendously. They used to fall asleep like this.’

Other parents lamented that they had not found this while they were raising their children, as one user named Rhiannon said: ‘I wish I knew about this [nine] months ago.’