Five leading economists have backed the end of the $90 billion JobKeeper program, saying the labour market’s rapid recovery made it hard to justify its continuation and the government should instead unveil targeted stimulus measures in the federal budget.

While employers, unions and Labor argued for an extension of the wage subsidy scheme, whose wind-up on March 28 is expected to put more than 100,000 people out of work, economists said the time was right to refocus spending on struggling sectors to avoid unnecessary debt. 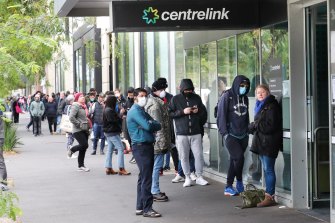 JobKeeper, which spared thousands from losing their jobs, ended on March 28. Credit:Jason South

Among those wanting a shift to more targeted spending is University of Melbourne Professor Jeff Borland, whose own analysis shows 250,000 workers could find themselves unemployed by the end of the scheme. He estimates ongoing employment growth, which has averaged 60,000 jobs a month over the past four months, will help absorb some of the job losses.

“The labour market recovery in Australia has been so strong since last May that by February the unemployment rate was back to where it was [pre-pandemic] and given it is an extensive program the time was right to unwind it,” Professor Borland said. “There are better ways to provide ongoing stimulus.”

Federal, state and territory governments have been spending at unprecedented levels to steer the nation through the coronavirus pandemic, with hundreds of billions of dollars in stimulus and support payments expected to see net public debt triple to $1.3 trillion over the next three years. The federal government has unveiled some significant support packages for hard-hit sectors such as tourism to help keep them afloat now JobKeeper, which was supporting about 1.1 million workers, has ended.

But Professor Borland said more government spending was needed to drive the unemployment rate from 5.8 per cent – which is well down on the 7.5 per cent rate at the height of the pandemic – to below 4.5 per cent, but it should be done more carefully.

“We’ve been paying for lots of people’s wage costs who employers would’ve paid for anyway … When you’re in a difficult situation you can justify that relatively un-targeted spend, but with the labour market having recovered I don’t think you can justify a scheme that isn’t well-targeted,” he said.

Independent economist Saul Eslake said there was “never going to be a perfect time” to end a major program but it was now appropriate to change tack. New Zealand’s wage subsidy scheme ended in September 2020 and employment there improved in the December quarter while the jobless rate decreased, he said.

“JobKeeper by design and intention was about preserving existing businesses and jobs. It did that remarkably successfully but at some point … it was going to come into conflict with the way the market economy works,” Mr Eslake said. By this, he means that productivity relies on the movement of people in and out of jobs in the economy including into better-paid roles and better-performing industries.

“The longer JobKeeper remained in place, the longer we were postponing the inevitable and the more we would pay the price in terms of lower productivity and lower living standards.”

He wants the federal government to provide additional stimulus and support, suggesting policymakers should’ve also considered extending the JobSeeker welfare supplement for those who found themselves unemployed as JobKeeper wound up.

“JobKeeper is a very expensive, broad-based scheme and it needs to come to its end, mostly because of the cost of the program,” Mr Bloxham said. “Ending it is likely to slow down the pace of improvement in the labour market … so we need more targeted support to continue to maintain momentum.”

BIS Oxford Economics chief economist Sarah Hunter said the ending of the scheme, which was effective in keeping people connected to their employers during the pandemic, was a “balancing act”.

“Now that conditions have largely normalised domestically, most businesses that needed the support are well on their way to recovery,” Ms Hunter said.

She noted the scheme hindered job mobility, which Treasurer Josh Frydenberg has warned about, as it potentially discouraged people from seeking more suitable work. There were also concerns the scheme was keeping afloat some businesses that were no longer viable.

“This isn’t a good outcome for the economy, the business or the worker in the long run, as all jobs need to be viable on an ongoing basis,” she said. “The flip side of this are the businesses that are still not able to operate normally … Notwithstanding the extra support that has been announced, some businesses in this group will slip through the cracks and there will inevitably be some people that lose their job.”

Deloitte Access Economics partner Chris Richardson said there was “no perfect moment” to end the scheme but he was heartened by job vacancy data and firms’ willingness to take on new employees.

“What’s happening is unfair [to those losing their jobs] but it’s probably still the right thing to do,” Mr Richardson said. “It can’t go on forever.”

While he is “relaxed” about the debt situation, he said it was a wise move to consider more targeted stimulus options aimed at hard-hit sectors.