Billions of dollars set aside for possible election war chest

Scott Morrison’s pandemic budget leaves open the option of a snap poll in coming months, with billions of dollars set aside for a potential election war chest.

While the Prime Minister told party room colleagues in October that he was a “full-termer”, the budget fine print leaves almost $10 billion up his sleeve for projects already signed off on by the federal cabinet but not yet announced.

There is $3.8 billion set aside in 2021-22 alone for the government to splash on election commitments. This compares with just $1.5 billion in last year’s budget set aside for “decisions taken but not yet announced” in the previous financial year. 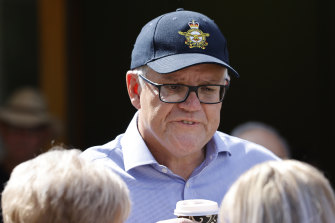 Prime Minister Scott Morrison has some fiscal wriggle room in his arsenal to unleash during an election.Credit:Dylan Coker

In total, there is $9.7 billion set aside over the next four years for as-yet unspecified projects.

The government could go to the polls in a standard election at any time from August this year. The latest date it can call an election is May 21 next year.

The Sydney Morning Herald and The Age reported in February that Mr Morrison had privately told colleagues to plan for two federal budgets before the Coalition sought re-election, in a sign that he was at that stage willing to resist any temptation to capitalise on his strong personal support among voters.

That means next year’s budget would need to be brought forward to at least April – a tactic Mr Morrison used to set up the Coalition’s attacks on Labor’s big-taxing agenda ahead of the 2019 election.

In another sign that last night’s budget was primed to put the third-term Coalition government on an election footing, Treasurer Josh Frydenberg promised an extension of the end-of-financial-year $1080 bonuses for millions of low- and middle-income earners, fixing an issue that could have marked it down in the eyes of voters.

The end of the low- and middle-income tax offset would have meant people earning between $48,000 and $90,000 suffered the equivalent of a $20-a-week hit to their take-home income, with up to 10 million taxpayers suffering.

The budget also contained other hints that the government is thinking about its election timetable.

The contentious Building Better Regions Fund, which has been labelled a political “slush fund” by the federal opposition, set aside a further $250 million for regional community infrastructure projects.

A further $2 billion in road safety upgrades and local road infrastructure projects was also pledged on a “use it or lose it” basis and Mr Frydenberg announced $15 billion in additional infrastructure commitments including for the Great Western Highway and Newcastle airport in NSW, the Bruce Highway in Queensland and the new Melbourne airport terminal.

A further $1.9 billion towards the rollout of vaccines will aim to significantly build on the 2.5 million Australians who have already received at least one dose.