Boost for renters as state pumps $800m into clean power

Victorian renters are among the big winners from a $797 million clean power package announced by the state government on Tuesday before next week's budget, with almost half of the money to be spent replacing old heaters with energy-efficient units.

The state's solar energy production will be extended from 100,000 homes to 142,000 in the next two years thanks to a $191 million investment, a one-off $250 payment will be available to households struggling to pay power bills and $112 million will go towards upgrading heating, cooling and hot water in 35,000 social housing properties. 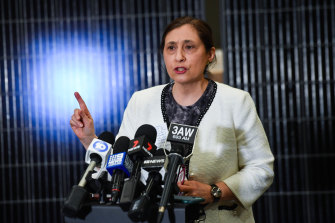 Environment Minister Lily D'Ambrosio said the $797 million investment would make bills cheaper for renters and drive down emissions, with a peak of up to 60 per cent of Victoria's power grid already supplied by renewables.

She said the government would spend $335 million to cover $1000 of the $1700 cost of energy-efficient heaters to replace old wood, electric or gas-fired units in up to 250,000 low-income households, saving them between $300 and $900 annually on their energy bills.

"Not only will they be able to replace their old heating systems, they'll actually be able to get the added benefit of having a cooling system in place too," Ms D'Ambrosio said.

"These will be all electric and all very high energy efficiency."

The $797 milllion package is the latest eye-watering investment announced before the Andrews government's state budget on November 24 and follows Monday's pledge to spend $2.2 billion on the Suburban Rail Loop and Sunday's $5.3 billion investment in social housing.

Treasurer Tim Pallas has admitted the budget will dig into a $24.5 billion debt facility taken out at the start of the coronavirus pandemic in April, as the government attempts to lift Victoria out of the economic woe inflicted by the second wave of COVID-19. Victoria has a real unemployment rate of almost 14 per cent, with women particularly badly affected.

Joel Dignam, founder of the Better Renting advocacy group, said more Australians were renting long-term than ever before, often in homes that were energy inefficient and suffered from cracks and gaps, missing insulation and inefficient appliances.

"Energy use in our homes contributes to around 20 per cent of Victoria's greenhouse gas pollution, and the biggest energy guzzlers are heaters," Dr Aberle said. "Renters are often at a disadvantage because they're not in a position to upgrade the home they live in, and landlords often don't have the incentive to do anything. Minimum standards for energy efficiency are needed to tackle this problem."

Before next Tuesday's budget, environment groups have been urging the Andrews government to focus post-pandemic stimulus spending on a “green” recovery, to drive the state’s battered economy out of recession.

The state government has so far resisted announcing its renewable energy targets for 2025 and 2030, which it promised to do earlier this year but delayed due to the pandemic.

Ms D'Ambrosio said an initial 1500 jobs would be created thanks to the $797 million package.

"And of course we're helping Victorians to reduce their emissions because we know that is important also for Victorian families," she said.

Previous postcode restrictions on homes eligible for Victoria's solar rebate scheme – implemented acrimoniously in 2018 – will be removed, which Ms D'Ambrosio said would allow 17,500 more rebates to be paid out in the next three years.