The sun shining behind her, Britney Spears stood on a patio at her home in Thousand Oaks, California, in a video posted on Wednesday, and spoke to her fans for the first time since a judge terminated her 13-year conservatorship last week.

“My voice was muted and threatened for so long,” she said in an Instagram video, adding that the #FreeBritney movement brought awareness to her situation when she couldn’t speak for herself. “I honestly think you guys saved my life.” 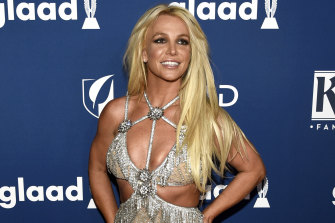 After the termination of her 13-year conservatorship, Britney Spears has thanked her fans for saving her life. Credit:AP

In the two-minute video, Spears, 39, maintained she was not a victim, acknowledged how her fame brought attention to her case and expressed relief that she has finally regained autonomy after having no control of her money or personal life for nearly a decade and a half.

The Instagram post came five days after the California judge’s ruling. Spears was placed under a conservatorship in 2008 following erratic public incidents and a mental health breakdown publicised in the tabloids. Her father, Jamie Spears, now 69, took control of her estate and made decisions on almost every aspect of her life, including what jobs she took, whom she socialised with and what medical treatments she should receive.

All the while, Spears financially supported her father, including paying for his legal representation and the security firm that closely monitored her every move. In the New York Times documentary Controlling Britney Spears, a former employee for the security company said the team had monitored the pop star’s text messages and planted a recording device in her bedroom. The company, Black Box Security, maintains it worked within appropriate ethical and legal bounds.

Fans have been rallying behind Britney since 2009 with the website FreeBritney.net. In the last few years, the #FreeBritney movement brought more awareness to the issue of conservatorships. Spears’s situation returned to the national spotlight in February with the Times′ documentary Framing Britney Spears, which exposed the mistreatment and her inability to request her own lawyer. The second documentary aired in late September.

In June, Spears took the rare opportunity to speak openly about her experience during a hearing to request the termination of her conservatorship. She noted that she had been “traumatised” and that the situation was “embarrassing,” “demoralising” and “abusive.” She alleged that she was forced to take medication that made her feel drunk and that she was required to keep an IUD in place despite wanting to have more children.

Following the hearing, Spears was able to hire a new attorney, Mathew Rosengart. He filed a petition to have the pop star’s father suspended from the conservatorship in late July. In late September, the judge officially suspended Jamie Spears as conservator, replacing him with John Zabel, a certified public accountant. As of Friday, Zabel only controls Spears’s estate planning and transferring of assets. The next hearing is expected on December 8.

On Friday, Spears posted a video to her Instagram and Twitter of #FreeBritney fans celebrating her win outside the Los Angeles courthouse.

Since then, the mother of two has expressed her desire to have another baby. On Tuesday, she posted a picture of a child standing on her toes next to a woman. “I’m thinking about having another baby !!! I wonder if this one is a girl . . . she’s on her toes reaching for something . . . that’s for sure,” she wrote.

She has also hinted at wanting to tell more of her story. In the Instagram caption for the video she posted on Wednesday, she noted that she was going to speak to her fans on Instagram “before I go and set things square on Oprah.”

Fans have been calling for an interview special with Oprah Winfrey, who in March sat down with Harry and Meghan, the Duke and Duchess of Sussex. Neither Rosengart nor Oprah’s production company, Harpo, responded to requests for confirmation of an upcoming interview.

In her video on Wednesday, Spears said she wanted to answer the many questions she’s received from fans, including what she wants to do now that she’s free to make her own decisions.

“I’m just grateful, honestly, for each day and being able to have the keys to my car; and being able to be independent and feel like a woman; and owning an ATM card – seeing cash for the first time; being able to buy candles,” she said. “It’s the little things for us women but it makes a huge difference, and I’m grateful for that. It’s nice. It’s really nice.”

Spears emphasised that she wants to be an advocate for people “with real disabilities and real illnesses.”

“I’m a very strong woman, so I can only imagine what the system has done to those people,” she said. “Hopefully my story will make an impact and make some changes in the corrupt system.”

In the Instagram caption, Spears called out her family members who were complacent about her situation.

“It still blows my mind every day I wake up how my family and the conservatorship were able to do what they did to me,” she wrote.

Spears said that her fans were the ones who looked out for her.

“The #FreeBritney movement – you guys rock,” she said, adding it was time to now “move forward.”

“God bless you all,” she said. “We’re going to have a good year, a good Christmas and rock on.”

TV, movies, Find out the next TV, streaming series and movies to add to your must-sees. Get The Watchlist delivered every Thursday.