Former parliamentary staffer Brittany Higgins has revealed that she felt she had to stay quiet about allegedly being raped by a colleague because of “weird party stuff”.

The new details emerged via a tearful audio recording broadcast on Monday night by the ABC’s 4Corners. 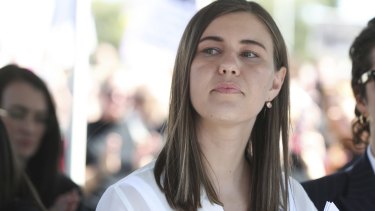 Ms Higgins alleges a colleague took her to the office of Defence Minister Linda Reynolds in March 2019 after a night out drinking and raped her. She says that told Senator Reynolds about the rape, but at the time Ms Higgins said that did not want it reported to police.

Senator Reynolds is on stress leave. She apologised to her former aide after calling her a “lying cow” although Senator Reynolds said that comment was in relation to the complaint handling process, not about disputing her account of being sexually assaulted.

Ms Higgins has since gone public about her alleged assault and triggered a national debate and protest movement surrounding the workplace culture in Parliament House and the treatment of women more broadly.

In the audio broadcast by 4Corners, Ms Higgins recorded herself telling a colleague about why she had decided to quit her dream job working in federal politics.

“I don’t think I can be connected to politics or connected to anything that happened,” a tearful Ms Higgins says.

“It’s just, I can’t. I can’t even explain to you how difficult it was.

“It makes me feel so gross and so sick and if this had happened in a park with a stranger and I’d somehow identified him and knew his name, I’m going to the police tomorrow and I would get him arrested.

“But because of all the weird party stuff and the pressures at the time and the hierarchy and whatever else, I felt like I couldn’t. And that’s a problem. ”

The program also heard from Parliament House security guard Nikola Anderson, who signed in the pairabout 2am. She saidMs Higgins was so drunk that she struggled to put her shoes back on after they were x-rayed for security purposes.

Ms Anderson said her colleague told her that the male staffer left in a hurry about 20 minutes later.

She recounted how at about 3am she went to the minister’s office to conduct a welfare check and opened the door to find the young woman completely naked.

“I’ve opened the door, I’ve noticed that the female was lying on her back, completely naked, on the lounge that was adjacent to the door, for which I’ve gone, ‘Oh.’

“The sound of the door or the breeze of the door opening has then made the female open her eyes, look at me. And then she’s rolled over onto her side. So therefore, my take on it was: she’s conscious, she’s breathing, she doesn’t look like she’s in distress. ”

Anderson said that as it wasn’t her place to intervene, she shut the door to ensure Ms Higgins’ dignity remained intact.

“Staffers can come in at any time of the day and night and I didn’t want anybody else to witness her completely naked. I was trying to do the right thing by keeping her dignity intact. Therefore, that was it for me,” Anderson said.

Prime Minister Scott Morrison has said that the male staffer had been sacked for a security breach, but Ms Anderson questioned this explanation

“What was the security breach? Because the night that we were on shift, there was no security  breach. Because these two people worked for Minister Reynolds, they were allowed access in there, which is why we granted it.”