Home » Can a sleep bra give you Liz's cleavage? Writer puts it to the test

Can a sleep bra give you Liz's cleavage? Writer puts it to the test

Can a sleep bra give you Liz’s cleavage? That’s what La Hurley says. With sales booming, our writer (36E) puts her chest to the test

For most women, there is nothing like the feeling of pure bliss that comes with whipping your bra off at the end of a long day.

But, instead of falling asleep with their breasts free of a squashing, uplifting or supporting brassiere, many women are now wearing them to bed.

Some do it for comfort, while others are convinced that 24/7 support will keep sagging at bay.

Elizabeth Hurley, 55, says the secret behind her astonishingly pert bust is wearing a bra to bed. Lorraine Kelly and Mariella Frostrup do the same as, famously, did Marilyn Monroe. Could they be on to something?

Last month Marks & Spencer launched its first bra designed to be worn while sleeping. The Flexifit Sleep Bra was devised after a 150 per cent surge in sleep-related searches to its website in 2020. 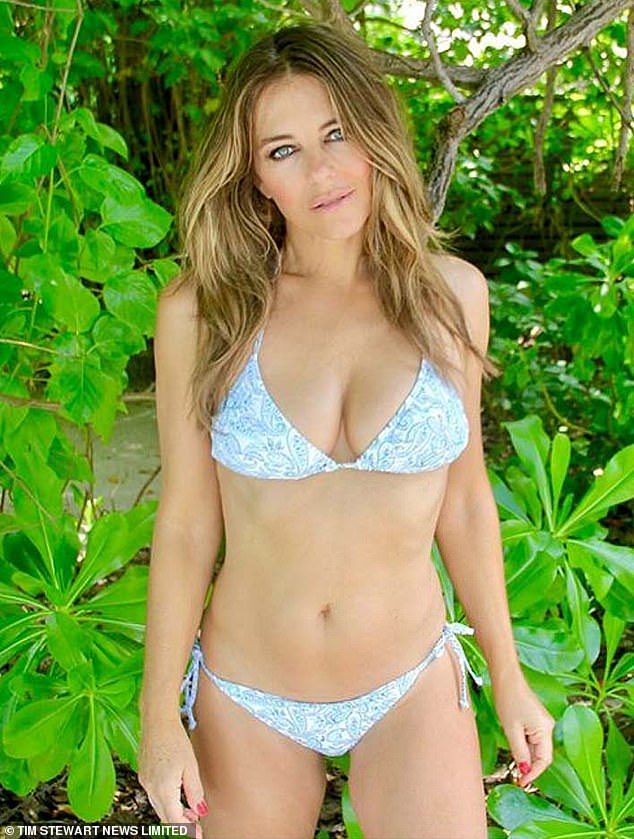 Elizabeth Hurley, 55, (pictured) has revealed that the secret behind her pert bust is wearing a bra to bed. Lorraine Kelly and Mariella Frostrup do the same, as did Marilyn Monroe

One in three bras purchased in the UK is from M&S and it remains to be seen if women will take to night-time lingerie. But with larger sizes already selling out, signs are the bigger-busted have been won over.

Bravissimo, which specialises in bras for larger sizes, says it introduced sleep bras in 2017 to meet customer demand.

Products in the non-wired and sleep category have seen a 124 per cent rise in sales over the past 12 months, with more than 45,000 sleep bras sold.

But is there any benefit to wearing a bra in bed — specialist sleep models particularly — or is it just another marketing ploy to fleece us of our money?

Plastic surgeon Marc Pacifico says: ‘There is no hard science on this. It’s certainly not going to do any harm and many larger-breasted women do find that the added support makes it more comfortable to sleep.

‘Breasts aren’t under the same stress from gravity as they are when women are upright.

‘However, I believe that any form of general breast support, which takes the pressure off the skin envelope (the part that supports the breast) could help reduce sagginess over time.’

Here’s what happened when I, and my 36E boobs, tested several over a week.

Size RANGE: 8 to 22 and available in navy and light grey.

At first sight it looks like a sports bra. Made from a cotton-modal blend, it feels as soft and as cosy as a favourite pair of pyjamas. The bra has a built-in internal frame to provide support throughout the night.

Purchasing a bra according to dress size is confusing, but I opted for a size 14 as that’s the top size I wear. 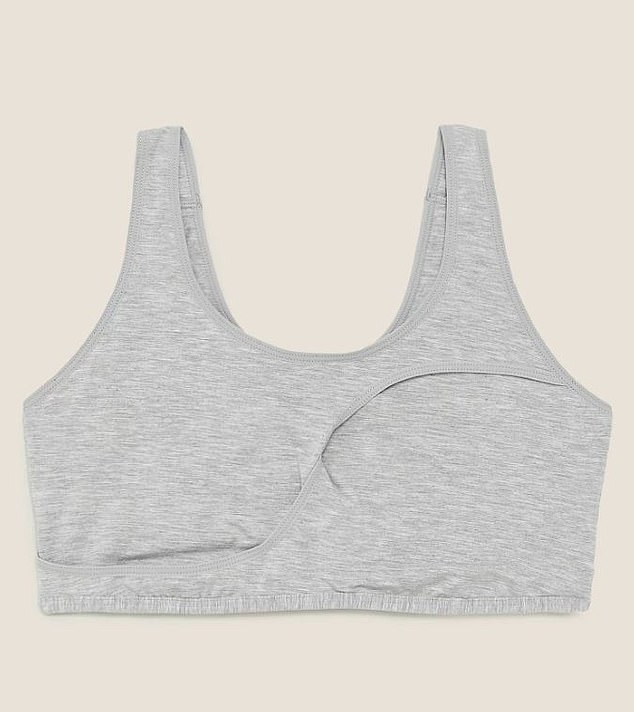 Marks & Spencer has launched its first bra to be worn while asleep. The Flexifit Sleep Bra (above) was created after a 150% surge in sleep-related searches to its website in 2020

It fitted perfectly and as soon as I put it on, I felt very ‘contained’ but not constricted.

There is no wiring and while the central band is firm and sturdy it isn’t overly tight, a pet hate of mine. It’s bad enough forever tugging a bra down during the day, I don’t want to be doing it at night, too.

I have sloping shoulders and worried that the non-adjustable straps would slip down, but they stayed firmly in place all night.

Halfway through, I did wake up feeling hot and the bra did lead to some squashing, but with a little bit of ‘rearranging’, all was well.

Soft, comfortable and supportive but I wouldn’t want to wear it on a hot summer night. 4/5

Made of Nylon and Elastane, the bra looks and feels cheap and crackly.

With a mesh panel above the cups, it looked like the sort of crop top I wore to nightclubs 30 years ago. But, back then, I was a 34B and needed little support. 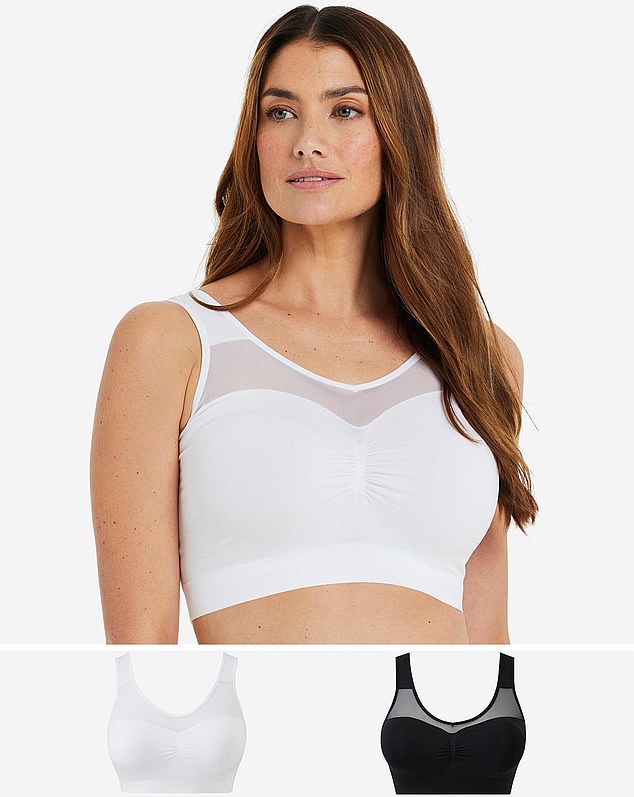 Claudia Connell (36E) put her chest to the test as she reviewed sleep bras. She said SimplyBe’s £24 Sleep Bra (above) was not a success as it looked and felt ‘cheap and crackly’

I opted for the size 16-18 as I thought the size 12-14 might be too snug. Despite going up a size, the central band was very, very tight. The material is very flimsy and offers no support, which made wearing the bra just pointless.

Several times I woke up feeling uncomfortable and had to tug the band as it rose up each time that I turned over.

It was so horrible to wear, I couldn’t wait to take it off the next day. The only good thing was the meshing meant that I stayed cool. 1/5

In My Dreams Bralette, £30, curvykate.com

This was the first sleep bra I tried that actually looked and felt like a bra, albeit a soft, lightweight one.

It comes in proper bra sizes, has adjustable straps and four rows of hook-and-eye fastenings. The dual peach and grey colouring made it look cute and feminine. 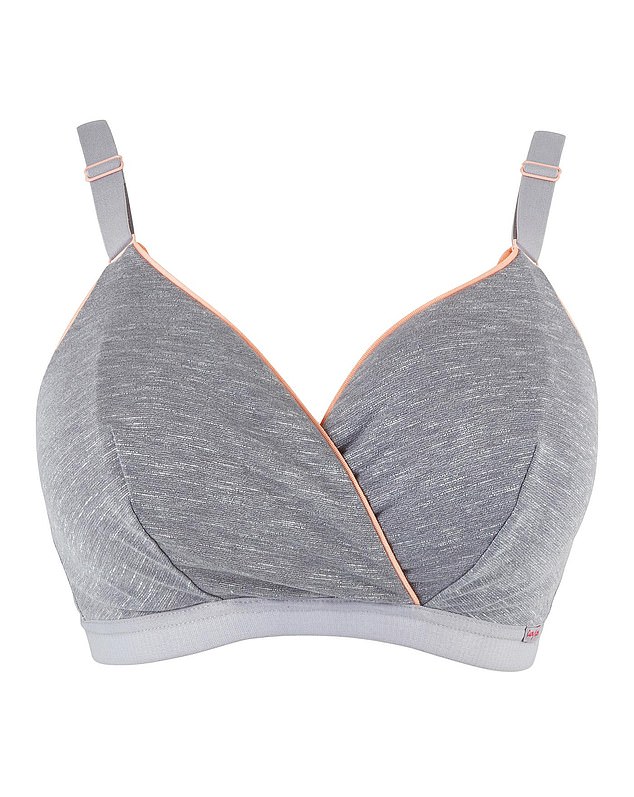 The In My Dreams Bralette (pictured) from curvykate.com only costs £30 and comes in a wide variety of sizes from 30DD/E to 40J/JJ

With no wires or padding, it still managed to feel sturdy and well-made, too. The bra has an internal ‘boob separator’ to reduce breast rub — a piece of stitched-in fabric that sits between each boob and keeps them apart.

When I put it on, it felt very much like a dress bra, not a sports one, but far more comfortable and luxurious.

Once in bed I barely noticed I had a bra on, and the separator meant my chest wasn’t crushed and I didn’t overheat. 5/5

A BIT OF A FLOP

With a wrap-style design, the bra looks more like a stylish bikini top. There’s no wiring and padding, but, as with regular bras, there are three rows of hook-and-eye fastenings to adjust the fit. 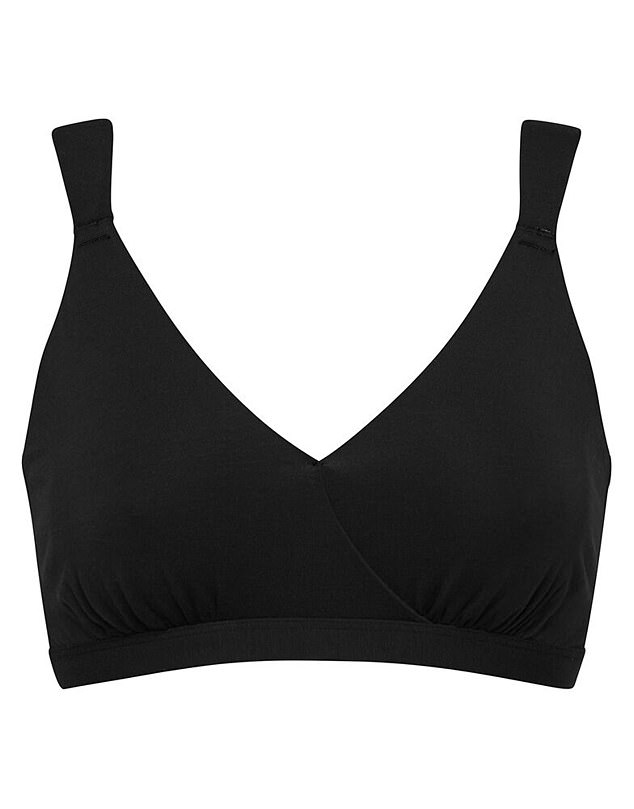 Figleaves comfort sleep bra (above), which costs £24, was described by Claudia as ‘cool and comfortable’ but she added that she did not feel it had much support

The central band is thick and stretchy, so it never felt tight, no matter how much I tossed and turned. As I often wake with my duvet on the floor, I know that I thrash around in my sleep.

The straps are thickly padded, which means there is no digging in at night when your body is pressed into the mattress or pillow.

A cotton-modal mix, it was cool and comfortable but, even after tightening the hooks and straps to make it fit, I didn’t feel there was much support in the cups and could feel my boobs flopping to the side when I changed position. 3/5

The sleep bra also comes in an unpadded version, but I was intrigued by the idea of a padded one. Surely that would be uncomfortable, especially for front sleepers?

It has regular bra fastening and adjustable straps, which are also padded for extra comfort.

The fact this was 92 per cent viscose (and eight per cent Elastane) didn’t fill me with confidence either. I get hot at night and usually avoid man-made fibres. 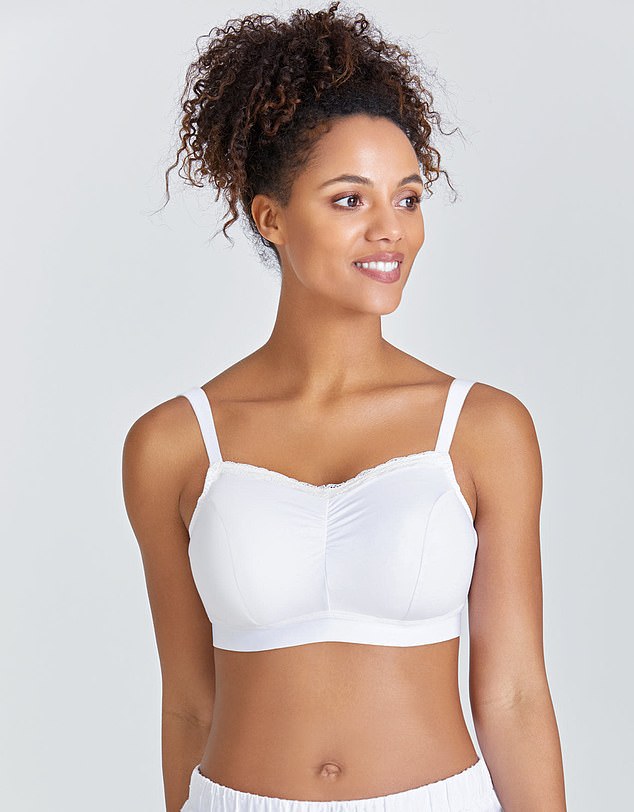 I know I’m buxom, but the cups looked huge, like you could fit a giant watermelon in each.

But that was exactly what was needed. My breasts were held firmly in place. As a (mostly) side sleeper, the padding provided extra comfort and I didn’t feel hot or sweaty.

The sheepdog of sleep bras (it rounded them up, it held them in place), this offered some strong support, even if it isn’t the prettiest. 4/5

VERDICT: After a week of wear, I wasn’t any perter and I certainly won’t be traumatising my neighbours by doing any Liz Hurley-style shoots in my garden.

But the purpose-made sleep bras are comfortable and supportive and if, as Mr Pacifico says, long-term wear could keep sagginess at bay, then I’m happy to keep wearing one.

a, Bra, Can, give, Liza, sleep, You
Celebrities