The Berejiklian government will continue its cash splash as the state recovers from its pandemic-induced recession, with targeted measures for families including $100 vouchers for preschoolers to learn to swim.

NSW will embark on its largest school building program in the state’s history, with $2.1 billion over four years for 44 new and upgraded schools, while health infrastucture funding will top $10 billion over the same period. 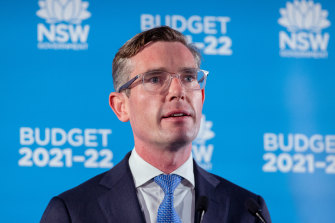 NSW Treasurer Dominic Perrottet’s fifth budget, delivered just seven months after his delayed COVID budget, shows the state’s deficit halved to $7.9 billion although will climb back to $8.6 billion in the next financial year.

Stronger than expected household spending and a surging housing market has driven the state’s economic rebound, although the government warns that international border closures are holding back NSW’s full recovery.

The budget forecasts are based on an assumption that borders will reopen in mid-2022, six months later than expected, with most of the state’s adult population to be vaccinated by the end of this year.

Further delays to reopening will hit the economy. It is already costing the state $300 million a month.

The government hopes to revive Sydney’s struggling CBD, which has been significantly hit by the border closures, through $100 vouchers for city workers to spend on long lunches on Fridays as well as $100 accommodation vouchers to encourage NSW residents to spend a night in a city hotel during winter.
One of the most significant investments in the budget will be $2.7 billion over fours years to be spent on giving the state’s 400,000 public servants, including key frontline workers, an annual 2.5 per cent pay rise.

Mr Perrottet said the government made the decision to forgo a $1.5 billion surplus in 2024/25 in order to pay public sector workers more.

“The Premier and I sat down and made the decision we wanted to do it from the outset,” Mr Perrottet said.

Public servants will also be paid special miscarriage and pre-term birth leave if they have a pregnancy loss before 20 weeks.

NSW will also spend $500 million on an ambitious electric vehicle (EV) policy, aimed at driving the uptake of battery-charged cars as the government moves toward net zero emissions by 2050.

Stamp duty on on EVs priced under $78,000 will be abolished and the government will provide $3000 rebates to 25,000 cars bought from September 1.
The government will provide an extra $18.6 million over two years to allow all 93 of the state’s electorates to apply for increased community grants worth up to $400,000 for better facilities and infrastructure ranging from new playgrounds, lights for night training, change rooms and renovations to key social initiatives such a Men’s Shed.

There will also be $200 million for a new community sport fund, which the Treasurer says will make access to local sporting facilities more equitable through more women’s change rooms, as well as upgrades to equipment such as playing surfaces and lighting.

As part of its ongoing measures to support families, the government will spend $43.9 million on new learn to swim vouchers for children aged three to six, and $150 million for the continuation of the free preschool program.

The government says it now provides more than 130 rebates and concessions to help families with the cost of living, including its popular Active Kids and Creative Kids vouchers.