Why ‘clean beauty’ can be a dirty business: It’s the latest buzz phrase in skincare, thanks to stars like Gwyneth. But behind the hype lie some troubling truths

Their main issue with the post by vogue.com was what they perceived to be her irresponsible attitude to sun protection.

‘There are a lot of really harsh chemicals in conventional sunscreen so that’s a product I really want to avoid,’ she proclaimed.

She opted instead for what she called ‘a clean mineral sunscreen brand’ before confiding: ‘I’m not a head-to-toe slatherer of sunscreen, but I like to put some on my nose and the area where the sun really hits.’ Then she daintily applied a smear to her nose and under her eyes. 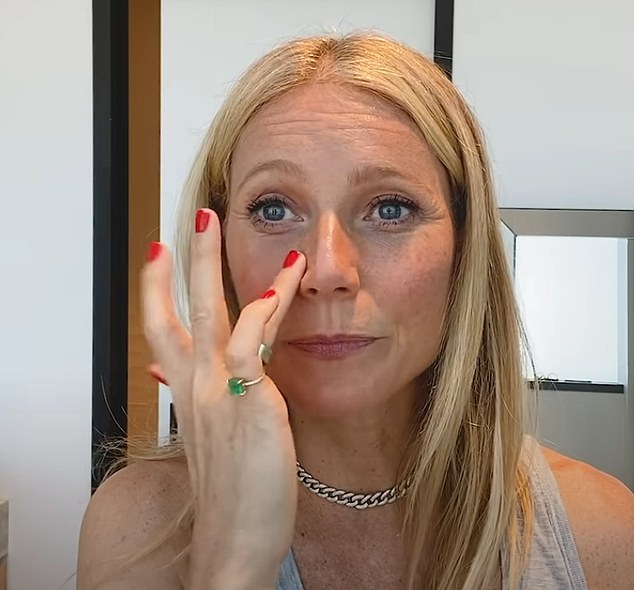 ‘Not only is Gwyneth wrongly applying SPF — you need around half a teaspoon for your face and neck — but she is presenting biased, wrong and dangerous information,’ says Dr Sonia Khorana, a GP and dermatology doctor based in the West Midlands.

‘Not using sunscreen properly puts you at risk of skin cancer and 80 to 90 per cent occur on the face or neck. She has such a large platform, it’s sad she’s providing inaccurate information.’

While a spokesperson for Paltrow’s Wellness brand Goop later claimed the video had been edited, other skincare tips in her video were considered problematic by dermatologists, such as her daily use of a gritty glycolic acid exfoliator on dry skin, which can damage the skin barrier. 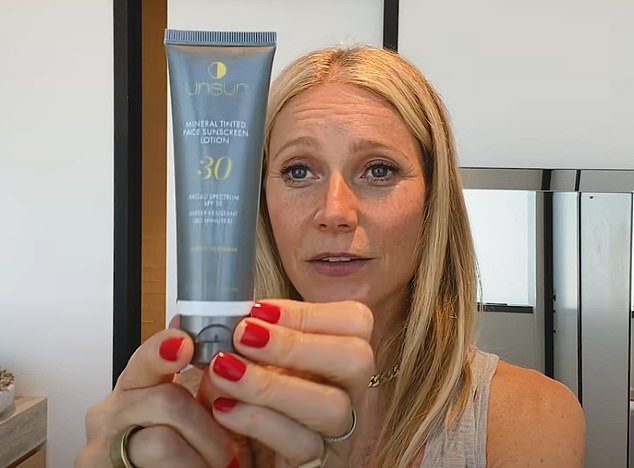 The ‘dubious products and dodgy procedures’ posed a ‘considerable health risk’ to the public, he said.

A spokeswoman for Goop said the company was ‘transparent’ about the fact they ‘cover emerging topics that may be unsupported by science or may be in early stages of review’.

Gwyneth has also advocated a vagina steaming treatment with ‘real healing properties’, forcing gynaecologists to point out that, far from healing, it can affect the healthy balance of bacteria, causing irritation and infection.

But is her most damaging legacy her insistence on referring to beauty products as ‘clean’? Gwyneth is at least partly responsible for the current ‘clean beauty’ mania.

There are almost four million posts on Instagram with the hashtag #cleanbeauty, and in the past ten years, Google searches for the term have increased ten-fold.

The trouble is, it means nothing. ‘Under UK cosmetics legislation, there is no legal definition of the word ‘clean’,’ says Dr Emma Meredith, director general of the Cosmetic, Toiletry and Perfumery Association (CTPA).

‘Clean’ is just another marketing buzzword,’ says Millie Kendall MBE. ‘I still don’t understand what it means, and I’m CEO of the British Beauty Council.’

It’s not just that ‘clean’ doesn’t mean anything — or worse, can mean any number of things — it’s what it implies about any product that isn’t labeled ‘clean’.

People assume products without the buzzy label are ‘dirty’, packed with ‘toxins’ or ‘chemicals’. 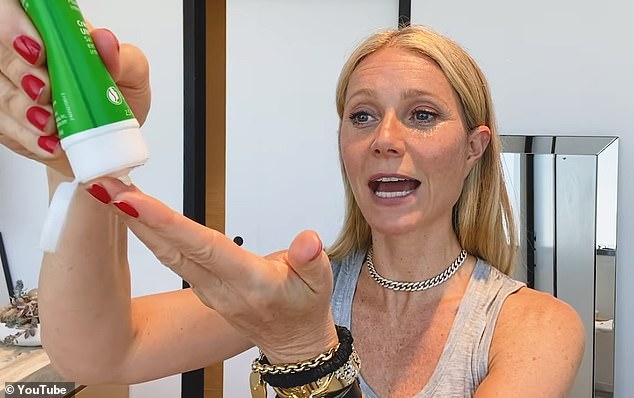 ‘This sort of misinformation is very damaging for the reputation of the industry,’ says Millie, who believes part of the issue is the number of people with large followings on social media, who don’t have any training or knowledge.

‘Anyone can pick up a camera and share information with a very large group of viewers, but that doesn’t mean it’s accurate.’

In the Vogue video Paltrow talks about ‘crazy ingredients — like antifreeze’ being in moisturisers.

But as Dr Meredith explains, the truth is ‘while some cosmetic ingredients may have other useful properties, their use in cosmetics is rigorously assessed for safety.

It’s like saying you’re ingesting perfume when you drink wine because both contain ethanol.

Dr Meredith, a pharmacist with a PhD in skin pigment and malignant melanomas, adds: ‘There are more than a thousand ingredients banned from cosmetics, while others can only be used subject to specific restrictions.’

While anyone can get an allergic reaction to anything, if you can buy the product in Britain you can be sure the formulation has been screened to ensure any risk is extremely low — regardless of whether or not it has the word ‘clean’ on it.

Not only is the ‘clean’ label confusing, the resulting panic it causes can be dangerous. Take parabens — natural preservatives found in fruit such as raspberries. They were demonised by a widely reported, yet potentially flawed, piece of research linking them with breast cancer. 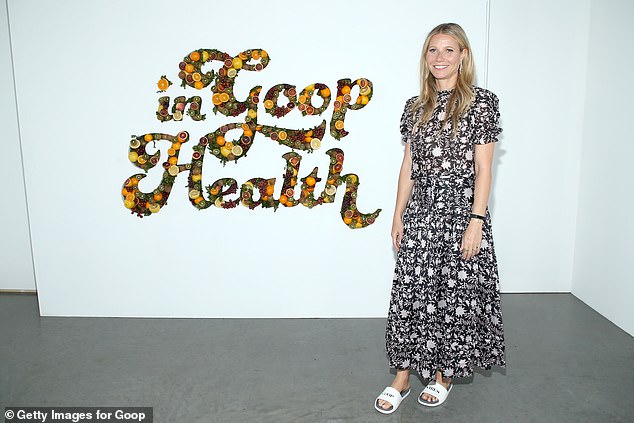 A spokesperson for Paltrow’s Wellness brand Goop claimed the video had been edited, but Gwyneth’s (pictured in June 2018) other tips were considered problematic by dermatologists

But as Sam Farmer, whose toiletries for young people include parabens, explains, this caused problems of its own.

‘When companies moved away from parabens, they needed another inexpensive, effective preservative,’ he says.

‘Methylisothiazolinone (MI) had long been used in shampoos and other wash-off products, but formulators knew it was not advisable to use it in leave-on products, such as sun cream.

‘But in the rush to replace parabens, this seems to have been forgotten.’

The result is that some consumers buying paraben-free products are getting sensitivity reactions to MI on their skin, so they can no longer use any products that contain it.

One dermatologist described it as ‘a worldwide epidemic of allergic contact dermatitis from MI’. The last word goes to Dr Khorana (@dermgp on Instagram).

‘Celebrities have a responsibility to make sure the information they’re sharing is safe,’ she says, ‘because giving biased opinions on topics they’re not experts in, without reference to evidence, can be damaging and dangerous.’