Australia will point to a $1.7 billion spending boost for new technologies to assure other countries it will cut greenhouse gas emissions further than its past pledges, as leaders at a United Nations climate summit struggle to reach a new pact to limit rising temperatures.

The new Australian statement calls for greater global cooperation on ways to cut emissions in the wake of a promise from Prime Minister Scott Morrison to the COP26 summit on Monday to spend $2 billion over five years helping other nations confront the climate challenge.

But the statement came as developing countries demanded more action from big economies, with Indian Prime Minister Narendra Modi highlighting the gulf between rich and poor by putting a $1 trillion cost on the help needed. 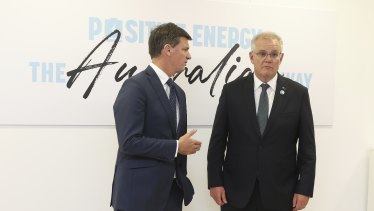 “It is India’s expectation that the world’s developed nations make $1 trillion available as climate finance as soon as possible,” Mr Modi said in the opening statements from world leaders at the summit in Glasgow.

“Justice would demand that those nations that have not kept their climate commitments should be pressured.”

United States President Joe Biden acknowledged the slow progress in the US Congress on a package to tackle global warming, while United Nations Secretary-General Antonio Guterres warned that commitments so far were not strong enough.

“Enough of burning and drilling and mining our way deeper,” Mr. Guterres said. “We are digging our own graves.”

In a sign of progress on some fronts, more than 100 leaders will commit to end global deforestation by the end of the decade under a plan to be endorsed on the second day of the talks.

Leaders representing land that is home to more than 85 per cent of the world’s forests are expected to commit to halting and reversing deforestation and land degradation by 2030.

The most significant new pledge to reduce emissions was Mr Modi’s announcement of a target to reach net zero emissions by 2070, while China kept its previous target of net zero by 2060.

In a day of statements from national leaders, Mr Morrison used his speech to say Australia will cut emissions by 35 per cent by 2030, hardening the language on this ambition without mentioning the smaller official target of a cut by 26 to 28 per cent.

Energy and Emissions Reduction Minister Angus Taylor outlined the government’s plan for technology to tackle global warming, which contrasted with the push for deeper carbon cuts by most other G20 countries.

A push on Monday from some of the G20’s most powerful members, including the United States and European Union, to sign a draft pledge for advanced economies to stop using coal by 2030 was in effect blocked by Australia, India and China.

Mr Taylor said new technologies could replace more carbon-intensive industries like gas and coal-fired power if they can be made cheap enough by research and development, and then deployed around the world.

“Accelerating the development and deployment of new and emerging low emissions technologies is critical to making net zero achievable for all countries,” Mr Taylor said.

“A step-up in global collaboration on practical solutions is the most meaningful and lasting impact this COP could have.”

The $1.7 billion, outlined in Mr Taylor’s remarks to an event on the sidelines of the summit, reflected decisions made since last September. They include $565 million for international partnerships with Korea, the UK and others, $464 million to develop seven clean hydrogen industrial hubs across Australia and $50 million for a scheme to measure carbon in soil.

The United Kingdom has committed to cut emissions 68 per cent by 2030 while the United States has set a goal to reduce emissions by 50 per cent and urged Australia to increase its near-term target. Japan is targeting 46 per cent, South Korea 40 per cent and the European Union 55 per cent.

The federal government has committed $20 billion of taxpayer funds over the next decade to develop the technology it says will help Australia reach net zero emissions by 2050.

About 40 per cent of the carbon cuts Australia needs to reach net zero by 2050 are expected to come from low-emissions technology.

The remaining emissions reductions will come from: carbon offsets like tree planting, which the government forecast would make up to 20 per cent of Australia’s total carbon savings; 15 per cent from the global shift from fossil fuels, and; 15 per cent from as-yet-unidentified technology breakthroughs.

In its Low Emissions Technology Statement, released on Tuesday, the government outlined a commitment to spend $1.7 billion across the priority areas, as well as for the emerging opportunity in livestock feed supplements to stop cows and sheep burping methane emissions.

Hydrogen fuel is identified as the most prospective low emissions technology. It can be produced as “green hydrogen” from zero-emissions electric-hydrolysis powered by renewables, as well as gas or coal backed up by carbon capture and storage.

The government has identified “stretch goals” for its focus technologies where it expects the cleaner alternative to compete with the incumbent industry.

For hydrogen, it set the production price at $2 per kilogram. The Low Emissions Technology Statement said green hydrogen could be the cheapest form of the fuel by 2028. Hydrogen produced from coal or gas, coupled with carbon capture and storage, could be produced for $2 per kilogram by as soon as 2025 – given producers can secure low-cost gas, off-take agreements, and development approvals for underground gas storage.

The government released its first technology statement in September last year and updated its projections in today’s release. Without a carbon price or caps on emissions, it’s banking on private companies to voluntarily switch to lower emissions alternatives.

Mr Taylor said the government is confident it can work with industry to lower the cost of cleaner technologies to achieve parity with existing techniques.

However, companies don’t just factor in the cost of fuel, there will be other costs associated with switching in buying new equipment and setting up new supply chains.

It remains to be seen if industry is sufficiently motivated to maintain access to global markets that are already demonstrating a preference for greener products, and to avoid penalties like carbon tariffs.

Australian National University Professor Warwick McKibbin told this masthead last week that a tax on carbon pollution was still the most economically efficient way to reduce emissions in private industry.

“It’s not all about technology,” he said. “Technology is part of the answer but really if you don’t change the price of carbon-intensive products relative to other products, it’s going to be very expensive to hit an emissions target.”