Experts including doctors, surgeons and whistleblowers told a joint investigation by The Sydney Morning Herald, The Age and the ABC’s 7.30 program that the sector is recovering rebates for services it is not entitled to claim.

Medicare was set up as a universal health system that provides free or subsidised health services that are medically necessary. It means rebates for cosmetic procedures are not claimable. 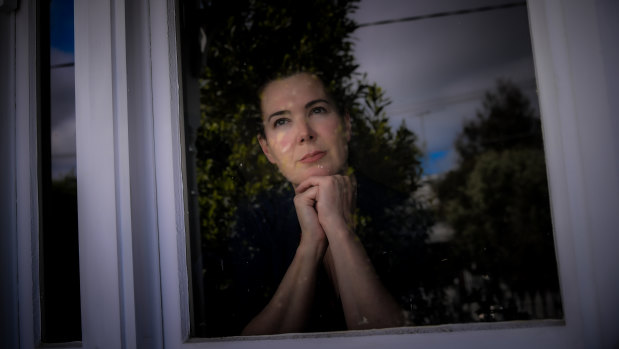 Janine Kepert is speaking out to warn others.Credit:Justin McManus

The joint investigation can reveal that, despite this, some practitioners have made claims through the system, including bulk billing pre-operative pathology and consultations for purely cosmetic surgery, as well as billing Medicare for cosmetic surgeries including tummy tucks and labiaplasty.

Dr Margaret Faux, who recently completed a PhD in Medicare and runs a business that processes Medicare bills for doctors, hospitals and corporate medical practices, said the cosmetic surgery industry was the worst offender for wrongful claims against Medicare.

“A unique feature of cosmetic procedures is that it captures an array of health practitioners including GPs, dermatologists, ear nose and throat specialists, anaesthetists, cosmetic surgeons, allied health and nurses,” Faux said.

Faux has previously suggested nearly 30 per cent of Medicare’s annual budget, or about $8 billion a year, is being lost each year through fraud, errors and waste. Serious flaws in Medicare’s systems and weak regulation have made it easy to rort and almost impossible to detect the leakage.

Dr Tony Webber, who ran the government’s Medicare watchdog for 6 ½ years until August 2011 and is now practising as a GP, said he identified some practitioners trying to claim cosmetic surgery on Medicare, including claiming labiaplasty surgeries, which is now one of the fastest growing cosmetic surgery procedures in the world.

Medicare has an item number for repairing vaginas but Webber said some doctors were claiming it for surgeries which are not medically necessary.

The consequences can be devastating. For Janine Kepert, it is a decision that changed her life. “It’s been amputated. I’ve had everything sliced off,” she said.

During the consultation she was asked if there was “anything else” she was interested in.

“I had some inflammation of my labia and I asked them to have a look at that. They also tried to talk me into doing a tummy tuck. I think the term they used was ‘mummy makeover’,” the single mother of two said.

“That’s the cosmetic industry … You go in for one thing and they tell you there are other problems that don’t exist. But you leave there thinking, ‘I need this mummy makeover’.”

She said she was told the more procedures she had, the more of a discount she would get.

She agreed to breast reduction and labiaplasty, saying the labiaplasty was described as a “minor procedure” to remove a small amount of labia tissue.

She ended up with nearly all her external genitals removed. It left her suffering from incontinence and loss of sexual function, making sexual relationships difficult.

She realised something was horribly wrong almost immediately after surgery. “I remember going back to another consultation and just sobbing. I was in such distress because of my injury. I was crying in the consult room and I remember that they shuffled me away to not upset any of the other potential patients or clients in the room.”

Kepert sought a second opinion and was told it was one of the worst injuries of this sort he’d ever seen. “Everybody who examined me were all horrified,” she said.

She took legal action through law firm Maurice Blackburn and Dr Sugitha Seneviratne was the plastic surgeon named in the proceedings.

As part of the legal process, Kepert was assessed by a number of independent medical examiners (IME), including one who identified incorrect Medicare billing relating to her labiaplasty.

A letter written and tendered as part of the legal proceedings, stated that the item number was “intended to deal with surgical repair of female genital mutilation or a major congenital anomaly … not covered by excising MBS items”.

It said: “I doubt Ms Kepert was suffering from any of these conditions.”

Faux looked at Kepert’s Medicare records and agreed there had been some inappropriate Medicare billing.

“It was particularly horrendous for Janine because her surgery ended up actually inflicting that precise mutilation on her,” she said.

The legal action included being assessed by an independent medical panel. During that process Seneviratne vehemently denied negligence.

In March this year, the medical panel determined Kepert had suffered a significant permanent injury.

She reached a settlement in August but wanted to speak up and warn others about the risks.

“This insidious practice is happening under a veil of secrecy (as) injured women are unlikely to come forward due to intimate and sensitive nature of the injury,” she said. “Female genital surgery should only ever be for medical reasons.”

A spokeswoman for Seneviratne denied he had engaged “in any wrongdoing”.

Questionable billing by the cosmetic surgery sector is the latest scandal to hit the industry after an expose into the clinics of Dr Daniel Lanzer uncovered safety and hygiene issues and doctors dancing and laughing while thrusting long stainless-steel cannulas into an unconscious male patient.

When he worked at the Lanzer clinics he said he saw blood work and pathology bulk billed for cosmetic surgery patients.

“My understanding is that these sorts of practices are ubiquitous across the cosmetic space,” Nixon said.

Audio messages obtained from WhatsApp sent to 60 staff scattered around the country and in the Philippines in 2019 discuss Medicare.

In one, in May 2019, Lanzer explains to staff how Medicare is billed and how to use doctors who worked in the clinic for referrals.

In another audio to staff in the same year, he discusses how to claim a tummy tuck. “The main thing is besides losing a lot of weight they had to have had resistant rashes on their lower stomach. If the doctor writes down those conditions, I can give the item number. They get about $700 back.”

Nixon said it was part of the “routine or shtick” of doctors priming patients to say they had certain conditions, even if they didn’t, so they could claim Medicare.

Faux looked at Medicare records of a series of patients from Lanzer clinics and found questionable Medicare billing in almost all of them. “Most had about $100 worth of pathology, preoperative pathology, some had radiology,” she said.

One patient, a Victorian policewoman, had a tummy tuck in late 2020 purely for cosmetic reasons yet her Medicare records included $600 for a tummy tuck.

In March 2021 the Medicare watchdog reprimanded a medical practitioner for inappropriately using Medicare for cosmetic services which it said were not rebatable under Medicare. It said the practitioner “initiated pathology for screening purposes and did not always meet the PBS (pharmaceutical benefits scheme) restrictions when prescribing certain antibiotics”.

The practitioner agreed to repay $65,000 to Medicare.