Home » Lifestyle » Couple spends €100,000 on IVF and have miracle twins after six years

Our €100,000 twins: Couple who vowed to give up after ten rounds of IVF fall pregnant on the TENTH try and are finally proud parents to a boy and girl

A couple have finally welcomed miracle twins – after spending almost £82,000(€100,00) on IVF in a six year battle to have children from ‘unexplained fertility issues’.

Teachers Amy and Gary O’Keeffe from Carlow in Ireland were desperate to start a family of their own, and after getting married six years ago, they immediately began to try for a baby.

After falling pregnant on their honeymoon but then experiencing their first miscarriage, the couple went on to struggle with fertility and have another two miscarriages. 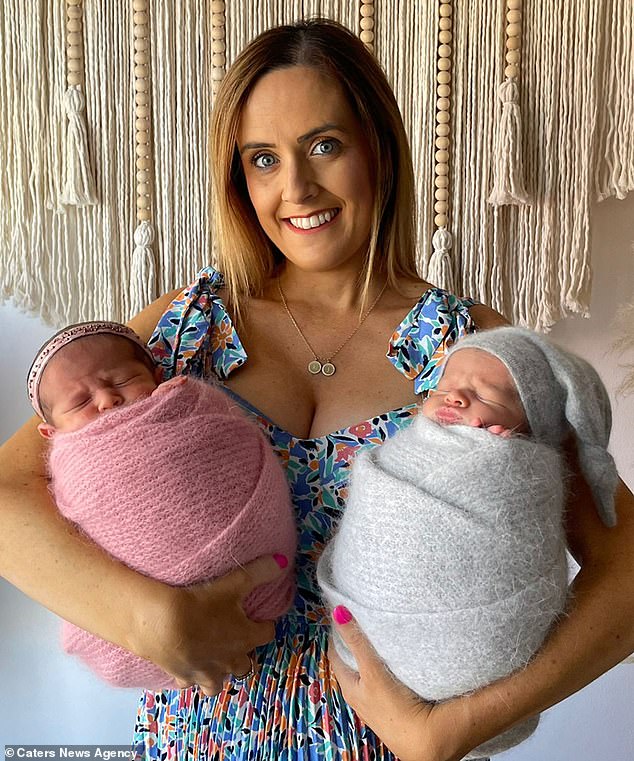 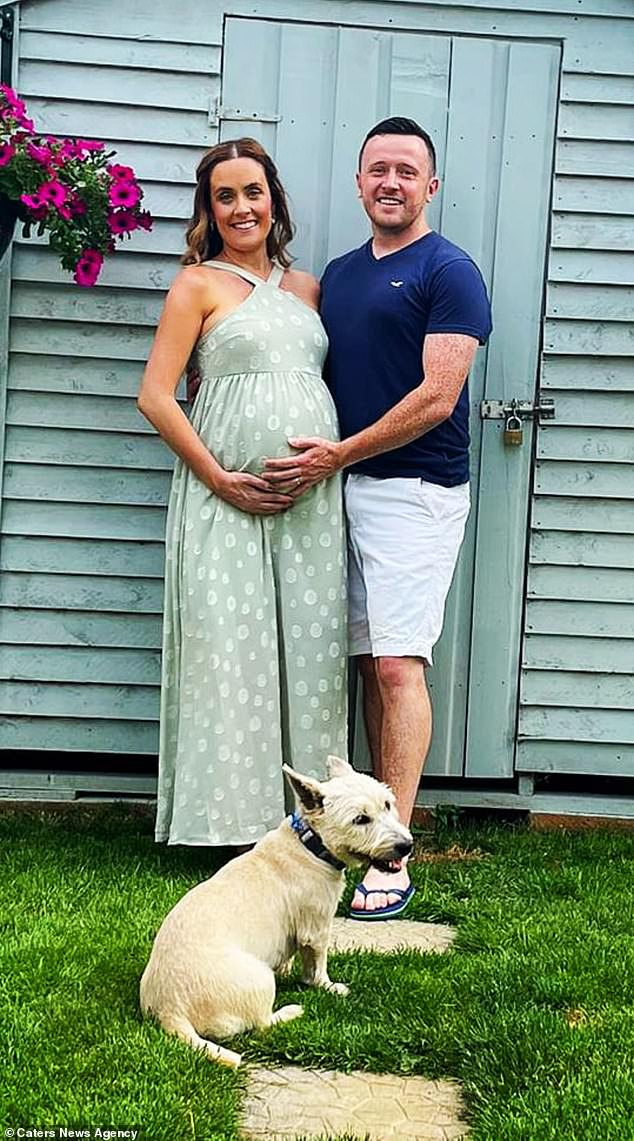 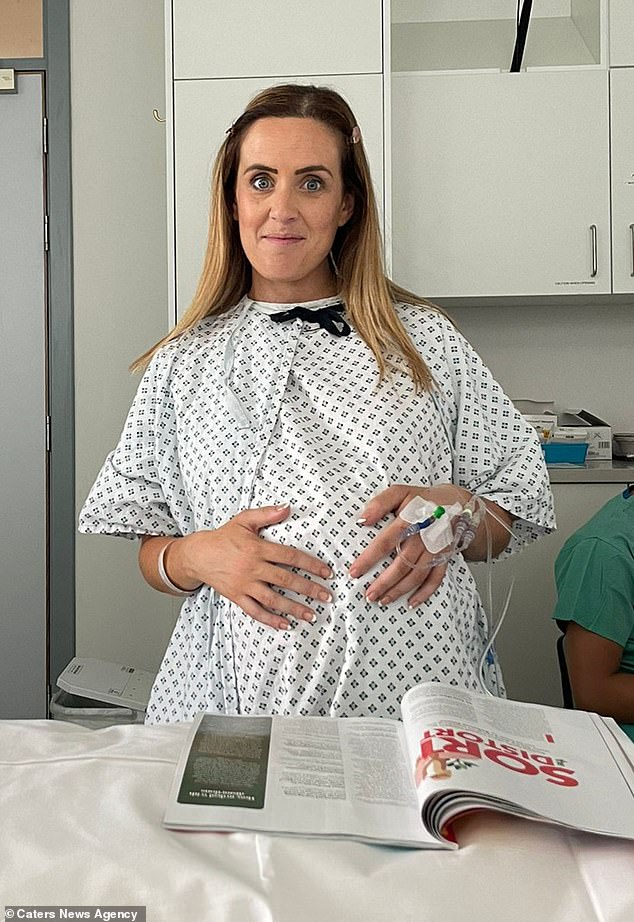 Amy during pregnancy after the IVF process had worked, ready to welcome her twins Jared and Maisie into the world

Amy fell pregnant easily and didn’t expect that they would suffer fertility issues because they were both in their mid twenties at the time,

But after the two devastating losses the couple decided to go down the IVF route – shelling out enough money to buy a small property in the process.

Working extra jobs to fund the costly process of private IVF the pair were both determined to make their dream come true.

They said that they would ‘give up’ after ten rounds of IVF, and on the tenth try the pregnancy held and the couple were over the moon.

In a bid to have their dream family spent €100,000 (£82,500) on ten rounds of IVF, and just as they were about to give up, they welcomed their twins, Maisie just before midnight on July 22 and Jared, just after midnight on July 23.

HOW DOES IVF WORK?

The menstrual cycle is first suppressed with medication before other drugs are used to encourage the ovaries to produce more eggs than usual.

An ultrasound scan is carried out to check the development of the eggs, and medication is used to help them mature.

The eggs are then collected by a needle inserted into the ovaries, via the vagina, before the eggs are fertilised with sperm.

Finally the fertilised embryo is transferred into the womb to grow and develop.

Despite IVF being most effective for the under 35s, 57 per cent of IVF cycles are undergone by women 35 or older.

Amy said: ‘I knew there were in there but now they are finally here, after all this time, is incredible.

‘We were constantly living with the question of will or won’t we have our dream family, and we finally have closure.

‘We have the happy ending that we had wished so hard for and can move on into our next chapter as a family of four.

‘Gary and I are both teachers, we absolutely love kids and couldn’t wait to start a family of our own.

‘We have been together 11 years and been married for six. We started trying for a baby after we got married, and fell pregnant during our honeymoon which sadly ended in our first miscarriage.

‘We’d fallen pregnant easily, so we didn’t expect we would have any issues in the future, but after 14 months of trying again, we had no joy.

‘We were in our mid-twenties so falling pregnant should’ve been happening easier for us than it was.’

Concerned that their miscarriage had knocked them out of sync, the couple went to the GP who referred them to a fertility clinic.

Amy said: ‘After extensive testing, we never received an official diagnosis and our struggles were put down to unexplained infertility.’

The couple started their IVF journey in 2017 and went on to have ten rounds of treatment over the following five years.

Amy fell pregnant twice during this period, but sadly both pregnancies resulted in miscarriages. 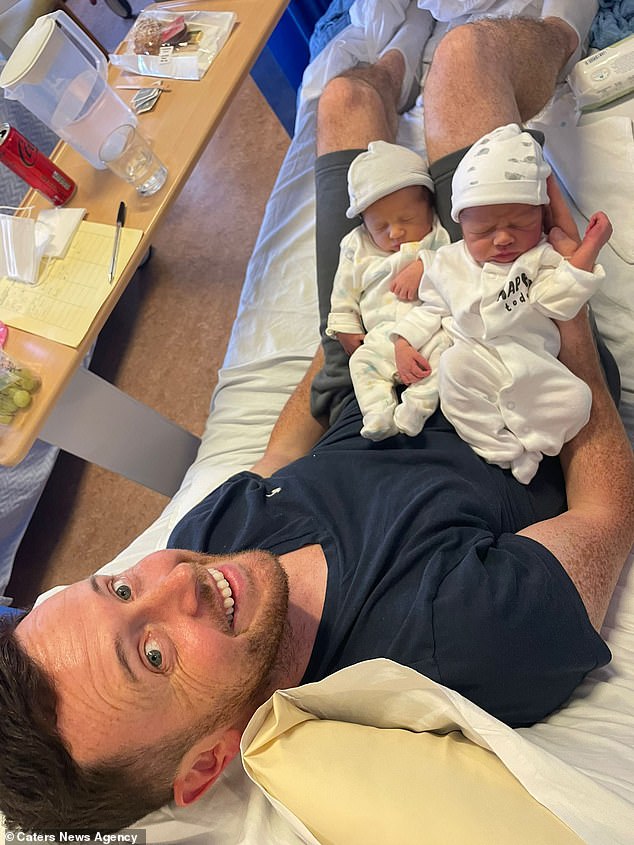 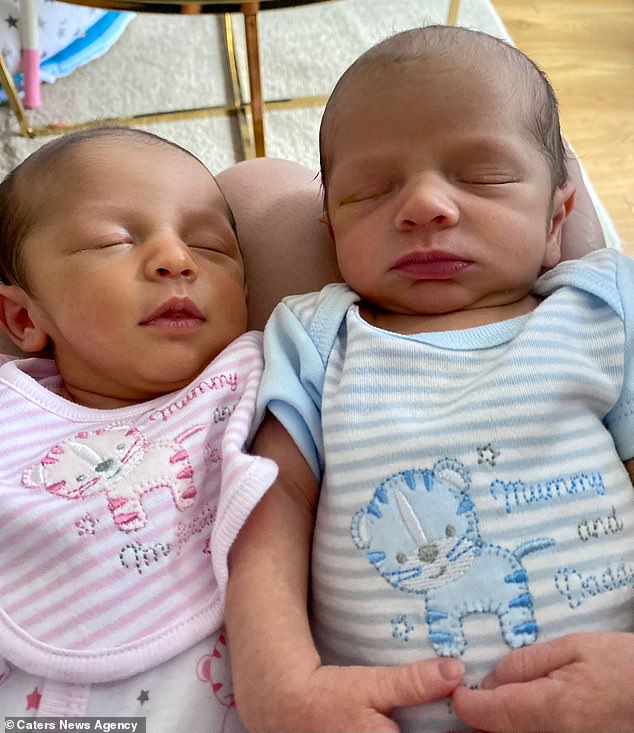 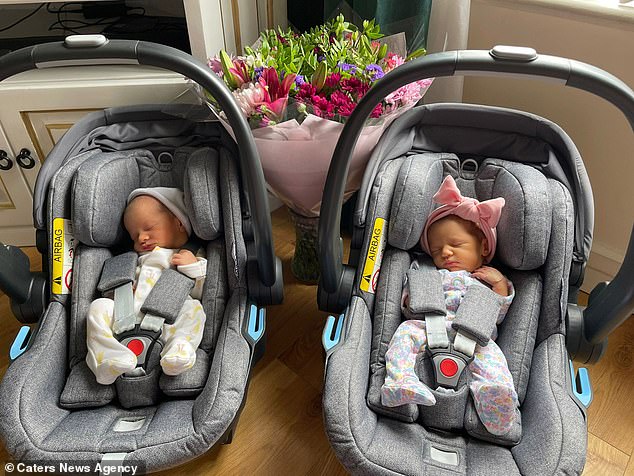 ‘It was devastating going through the same thing over and over again.

‘Each time I thought to myself that I couldn’t go on again and lost a bit more hope.

‘If we hadn’t gotten pregnant by the tenth round of IVF, we agreed that we would bow out as the odds were more than against us.

‘We were almost making peace with the idea that maybe we just wouldn’t be able to have children of our own.

‘We were both working extra on the side of our jobs to fund the IVF. It became part of our household budget.

‘Sometimes we’d have to delay cycles while we saved up the money to pay for it. 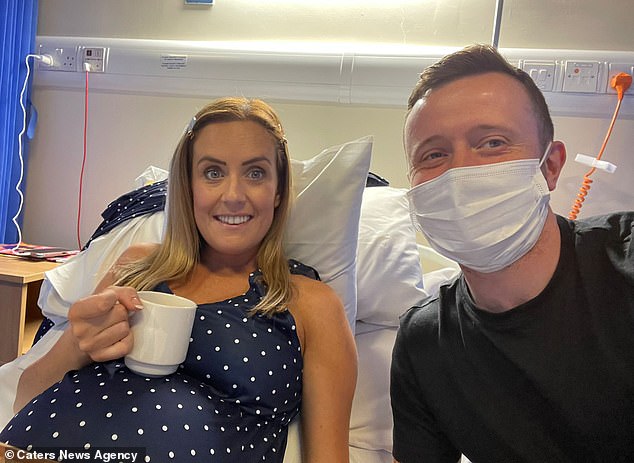 Amy and Gary in hospital.  After a smooth pregnancy, she carried the babies to 37 weeks and had to be induced 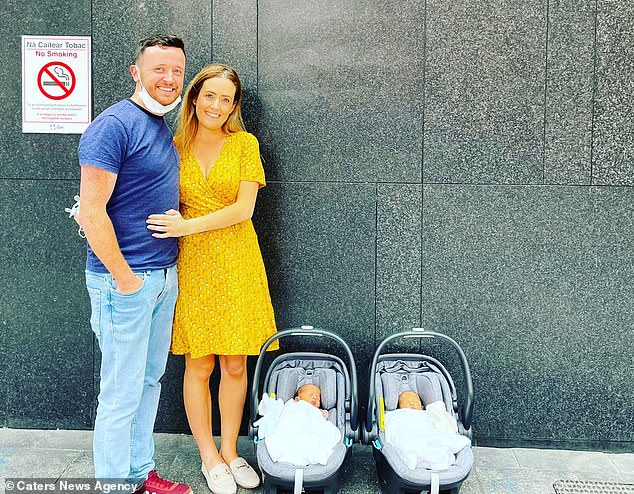 Amy said: ”We didn’t find out the genders of the babies, so we were so happy when we discovered we had a boy and a girl. It was the icing on the cake. We took our babies home three days later and it was the best feeling in the world. We finally got our happy ending after all this time.’ 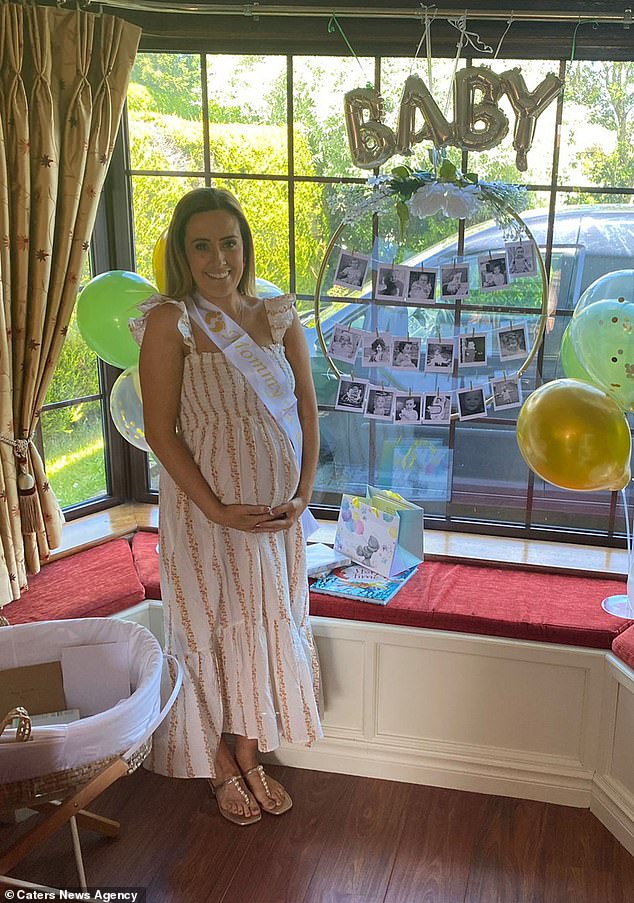 Amy pictured at her baby shower after a long-awaited pregnancy. She said ‘going through the same cycle over and over again was heartbreaking’ and the couple had almost given up

‘We had our tenth embryo transfer in November last year where we transferred two embryos, but we had no expectation of them taking.

‘You can’t test for two weeks but within a week of the transfer, I started feeling really unwell.

‘I just thought I’d made overdone it this time and pushed my body too far, but out of curiosity I decided to do a pregnancy test and I saw a strong line on the stick.

‘The clinic wouldn’t test us so we decided to go to our GP who asked us if there is any chance it could be twins, but after everything we had been through we’d never imagine we would be that lucky.’

Who qualifies for NHS-funded IVF treatment

The National Institute for Health and Care Excellence (NICE) fertility guidelines make recommendations about who should have access to IVF treatment on the NHS in England and Wales.

These guidelines recommended that IVF should be offered to women under the age of 43 who have been trying to get pregnant through regular unprotected sex for 2 years, or who have had 12 cycles of artificial insemination.

However, the final decision about who can have NHS-funded IVF in England is made by local clinical commissioning groups (CCGs), and their criteria may be stricter than those recommended by NICE.

If you’re not eligible for NHS treatment, or you decide to pay for IVF, you can have treatment at a private clinic. Costs vary, but 1 cycle of treatment may cost up to £5,000 or more.

The couple’s first scan was five days before Christmas last year and was terrified they were going to receive more bad news.

Amy says that her heart was in her mouth and she couldn’t believe it when the nurse told them she could see a second baby.

She added: ‘When we saw the two babies, there were lots of tears. We were both crying and so was the nurse, as I think she was so scared she was going to have to break some bad news to us before Christmas.

‘It was so unexpected because the odds were against us.

‘Our families were overjoyed when we told them. I think they felt a huge sense of relief after five years of bad news, and if it was ever good news it turned to bad news.

‘So although everyone was happy, it came with a warning. It was bitter-sweet.

‘I was terrified to have too much baby stuff in the house until towards the end of my pregnancy because I was constantly scared about whether we would bring the twins home.

‘The pregnancy went smoothly. I carried the babies to 37 weeks and had to be induced.

‘I delivered them naturally on different dates and they are both different star signs.

‘We didn’t find out the genders of the babies, so we were so happy when we discovered we had a boy and a girl. It was the icing on the cake.

‘We took our babies home three days later and it was the best feeling in the world. We finally got our happy ending after all this time.

‘The twins are two little fighters. They are thriving and certainly living up to their star signs.

‘We couldn’t be happier.’