Home » Lifestyle » Creepy much? The weirdest things at Dark Mofo 2019

Creepy much? The weirdest things at Dark Mofo 2019

Look, there may be no slaughtered bull rituals this time but, as ever, Dark Mofo has tried its darnedest to outweird itself with its biggest visual arts program yet.

With the old Dark Park at the docks carved off for redevelopment, the festival has introduced new venues in which to showcase its weird and wonderful attractions.

There’s the Dark Path, a self-guided tour through the parklands that abut the Hobart CBD, where all sorts of spooky and unexpected things happen when darkness sets in.

And there’s A Forest, which has transformed the unique old Forestry Tasmania building on Melville Street – with its spectacular, domed front room – into a group art exhibition featuring virtual reality works and sculptures that make sudden noises or creep around.

These are some of the oddest things we discovered along the way. 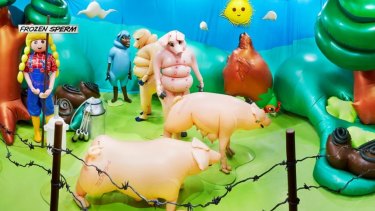 The Japanese artist has completely transformed Hobart’s old Avalon Theatre into a freaky barnyard where disgorged pigs and naked farmgirls dance around the cartoon-like surrounds in a latex-laden theatre frenzy. Sit on the hay bales and sip "frozen semen" cocktails from the "milkbar" while you observe the movements of these odd, larger-than-life characters. Avalon Theatre, Wed-Sun, 5pm-10pm, until June 23. Free entry.

Not the only virtual reality experience to be had at the festival, and they both come with a warning – in this case sexual violence. American artist Paul McCarthy has created a disturbing choose-your-own adventure of different scenarios played out by two characters, Mary and Eve. They’re computer generated but real enough to give you shivers as they walk past you, although most of the violence is captured in a disturbing soundtrack. A Forest, Wed-Sun, 5pm-10pm, until June 23. $20 entry.

Chris Henschke: Song of the Phenomena 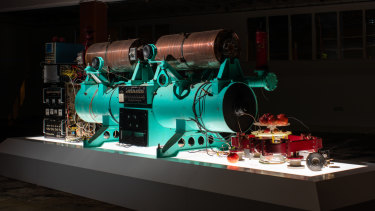 Where do decommissioned particle accelerators go to die?Credit:Dark Mofo/Jesse Hunniford

If fruit could talk, what would it say? That’s what Melbourne-based artist Chris Henschke attempts to discover with this installation work, in which a bowl of old pomegranates and bananas is fixed up to a decommissioned particle accelerator that transposes their decomposing atoms into an unnerving soundtrack. A Forest, Wed-Sun, 5pm-10pm, until June 23. $20 entry.

Jimmy Cauty: Children of the Aftermath

Peer through bullet holes in the side of a shipping container to see Jimmy Cauty’s astounding Aftermath Dislocation Principle – a miniature scale model of the aftermath of a riot in small-town Britain. Custody of the work has been handed to a cohort of local kids whose job is to not only maintain it but help viewers navigate and interpret it, while also showcasing some of their own creative responses. Dark Mofo Art Program Co-ordinator Grace Herbert said ADP toured 35 locations in the UK and Cauty discovered that kids – also the custodians of our future – were best placed to communicate the ideas in the work. Hobart Town Hall, open 24 hours until June 23. Children of the Aftermath in attendance 4pm-10pm, Wed-Sun. Free. 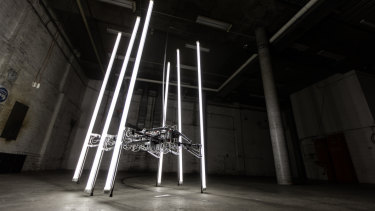 Australian artist Michael Candy’s giant mechanical critter, Cryptid, slowly clicks and creeps around a bunker-like, concreted room, lightsaber-like vertical beams jutting up into the dark space. I asked curator Jarrod Rawlins if it was perhaps meant to go faster and he said: "It’s a dystopian robot future where the robots have arthritis." Touche. A Forest, Wed-Sun, 5pm-10pm, until June 23. $20 entry.

Tony Oursler: Beyond the Spectrum/6th

As you wind your way along the Dark Path at nightfall, the dimly lit trees begin to whisper to you. Creepy, much? Tony Oursler has created two sound and light installations for the festival's new, self-guided art walk through Hobart's parklands, including Beyond the Spectrum and 6th, in which he resurrects the Tasmanian Tiger via a "digital de-extinction" of ghostly projections at the old Beaumaris Zoo site. Regatta Grounds and Royal Tasmanian Botanical Gardens, Dark Path, nightly until June 23. Free entry.

Chris Watson and the Wired Lab: Hrafn – Conversations with Odin 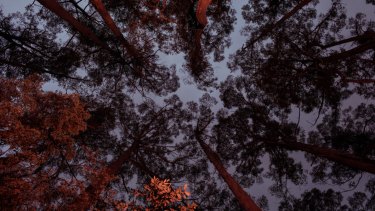 This year’s Dark Mofo festival theme "a forest" is taken to its most literal end with this work, the first from Project X, which aims to reinvigorate tourism in the Huon Valley after last summer's horrendous bushfires. The work is an immersive soundscape of 2000 ravens coming to roost – but to hear it you’ll need to travel by bus into the depths of the Huon and into the forest as darkness descends. Buses departing from Hobart 2.15pm and Hastings Caves Visitor Centre 4.30pm, Wed-Sun until June 23 and continuing after the festival (dates to be announced). More details project-x.com.au. $55 plus booking fee.

Paul Yore: It’s All Wrong but It’s All Right 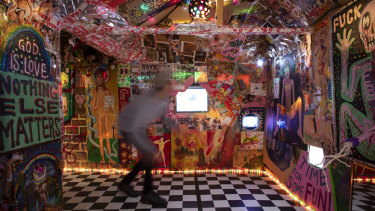 Inside an old chapel is … another chapel. Sort of. Paul Yore – the young artist whose work was once interfered with by police following child pornography charges that were ultimately dropped – has created a shrine to his vision of the world in It’s All Wrong but It’s All Right. Walk inside it and be surrounded by a cavalcade of collage and sculpture, confusing aphorisms, disco lights, bling, defaced pin-ups and phalluses aplenty. Black Temple Gallery, Wed-Sun, 3pm-8pm, until June 23. Free entry. 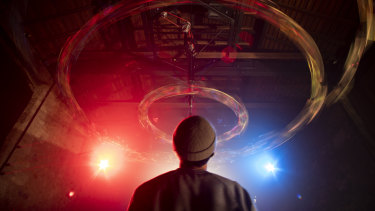 Andrew Hustwaite: Only the Penitent Shall Pass

Away from the main action and over the Tasman Bridge is a magnificent, refurbished 19th century barn-cum-art venue in Rosny. It has been filled with all sorts of bizarre geometric and kinetic sculptures by Melbourne-based artist Andrew Hustwaite – and you are invited to climb on them, wear them and otherwise muck around with them. Or you can watch a professional interact with them in a one-off durational dance performance. 11am-5pm daily until June 30, Rosny Barn. Free Entry. Dance performance, 4pm-7.30pm, June 15, $15.

Hannah Francis travelled to Hobart as a guest of Dark Mofo and Tourism Tasmania.