A father-of-three has revealed how he lost 220lbs after his weight caused him to stop breathing more than 150 times a night – leaving him terrified he’d die in his sleep.

Commercial driver Kedric Barrett, 46, from Atlanta, Georgia, always struggled with his weight growing up and has been classified as being obese since the age of nine. As a result of his weight, Kedric was bullied relentlessly by his classmates at school.

Kedric was active in his early adult life coaching both basketball and football, but despite this Kedric would binge eat everything in sight including chocolate, chips, pizza, and sodas. As a result, his weight ballooned to 461lbs and he barely fit into his 5XL shirts.

Getting fit: Father-of-three Kedric Barrett, 46, has revealed how he shed 220lbs after his weight began putting his life at risk 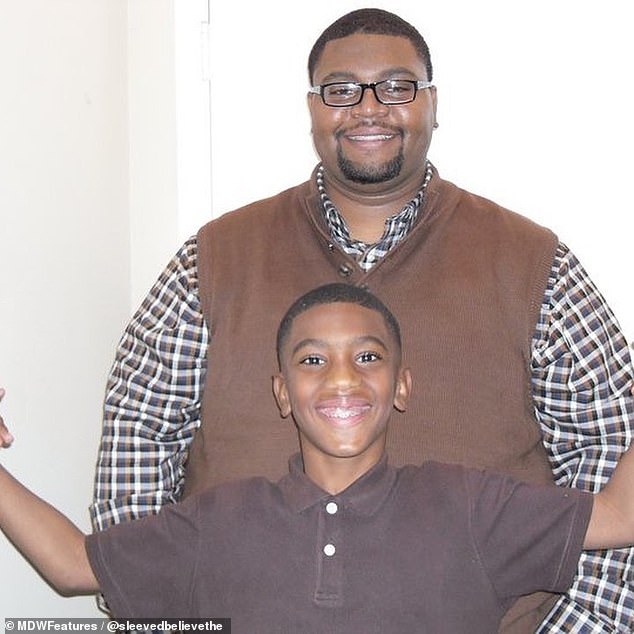 Scary: The Atlanta resident’s weight stopped him from breathing 150 times a night, leaving him terrified that he was going to die in his sleep

New normal: After realizing how dangerous his size had become, Kedric decided to take drastic action and do something about it

When visiting restaurants with his family, Kedric often had the embarrassing ordeal of not being able to fit in the seating provided and attempting to ride on roller coasters was out of the question leading Kedric to miss out on quality family time.

Kedric’s weight triggered a series of health problems including sleep apnea – a condition in which the sufferer stops breathing momentarily in the night. Kedric feared that one night, he might never wake up leaving his wife, Chauntel, 42, and his children, Christopher, 23, Kedric Jr, 19, and Zachary, 16, alone.

A sleep specialist confirmed that Kedric stopped breathing up to 150 times per night and he began using a CPAP machine to regulate his airways whilst asleep. Knowing that he needed to maintain his health for work, Kedric realized that it was time for things to change.

In August 2018, Kedric underwent six months of psychological evaluations and consultations regarding the possibility of getting a gastric sleeve. The surgery went ahead on April 26, 2019, reducing the size of Kedric’s stomach by 85 per cent to that of an egg.

Since his operation, Kedric’s life has changed dramatically. He has managed to lose almost 220lbs and now weighs 242lbs. This is eight pounds under his goal weight and he fits comfortably into an XL shirt.

No longer suffering from sleep apnea, Kedric is delighted that he is now able to take part in activities that his weight had prevented him from doing for years such as cycling, walking and playing sports with his sons.

‘It took me many years to realize that I was cheating myself and my family out of a better quality of life,’ Kedric said.

‘I developed an addiction to food and it became therapeutic for me as I grew older.

‘If I carried on the way I was going, they were going to be burying me very early. Now that I think back on it, it was very selfish of me.

‘I couldn’t even tell my wife my waist size when she wanted to buy gifts for me because I was ashamed of it.

‘Before my surgery, I would go into restaurants with my family and the servers would often try to seat us in a booth only to find that I couldn’t fit. It was humiliating to then have to be moved with everyone watching.

‘I would take my kids to theme parks and I would just walk around because I wasn’t able to fit on the rides.

‘The final straw was when I found out that if I was to become diabetic and required insulin, I wouldn’t be able to get my medical card needed for me to have my driver’s license for work.

‘I was on the losing end of the battle and dying a slow agonizing death.

‘I decided that enough was enough and I had to take back my health by any means necessary.

‘I got to the point where I had developed sleep apnea and went to sleep every night with the fear of just not waking up.

‘The biggest thing stopping me from getting the surgery sooner was my paranoia about dying on the surgery table but eventually in August 2018, I spoke to the people at Atlanta Bariatrics and discussed the options for weight loss surgery.

‘It’s the little things that really make the difference in my life now and I’ve even managed to go on a roller coaster with my kids.

‘I can do so many things that I couldn’t do as an obese person. I can now fly on a plane without a seatbelt extender. I can fit in my car without putting my seat all the way back and making the person who rides in the backseat uncomfortable.

‘Working out has become a major part of my life. I’m running, riding bikes and going hiking with my family.’

Kedric has started his own podcast called Sleeved Believe The Hype, documenting the good, the bad, and the ugly of his weight loss journey. He also hosts a monthly support group on Zoom for others who have undergone similar weight loss procedures.

Easy does it: Prior to his surgery, Kedric struggled to fit into a 5XL size shirt, but he now wears an XL without any issue 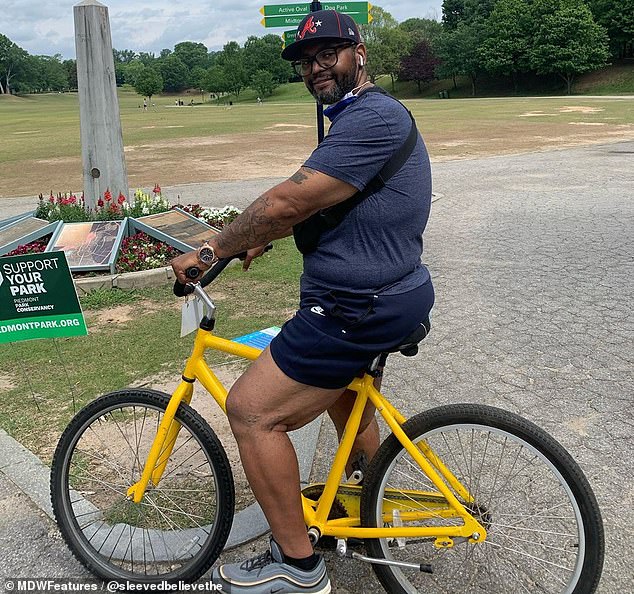 Staying focused: Kedric now leads an active, healthy lifestyle, which has helped him to keep up his weight loss

With friends, family, and strangers on Instagram saying that he is an inspiration to them and looks’ like a completely new person’, Kedric is pleased that he managed to overcome his paranoia about dying during surgery and go ahead with the life changing operation.

Despite his amazing success in losing the weight, Kedric admits that resisting temptation to eat food is sometimes a struggle and is thankful for the support of his wife and sons who help keep him on track.

‘I’m not going to lie and say there haven’t been times when I’ve maybe eaten a little bit more than I should have, but I know I have to keep on track so I never go back to the way I was,’ Kedric said.

‘The biggest issue is that I can’t wear any of the clothes I used to wear anymore. They all look like gowns but the cost of new clothes is a price worth paying.

‘The most complimentary comments that I have received are from people telling me how proud they are of me for taking back my health and getting my life in order.

‘That compliment outweighs all of the compliments of you’re so fine and handsome.

‘I feel so good about myself now. I’m so proud of me.

‘All of my accomplishments and success I’ve had so far have made me a better man’.