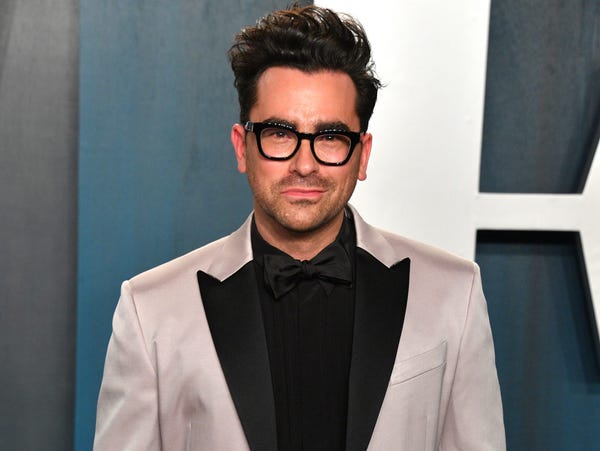 Dan Levy got all dressed up to celebrate the 2020 Emmy Awards on Sunday from his father's home in Canada.

In July, executive producers for the Emmys sent a letter to attendees that said the show's dress code would be "come as you are, but make an effort!" Although the event was virtual, Levy still dressed liked he was ready to step onto a red carpet.

Levy wore a gray skirt suit from American fashion designer Thom Browne, which included a matching tie and face mask. He also wore a pair of glasses from his own line, D.L. Eyewear.

📢 Tonight, some #SchittsCreek cast and nominated team members have been able to gather for an #Emmys event in Toronto, adhering to Ontario’s COVID-19 guidelines. All in attendance have been in isolation since returning negative COVID-19 tests. Good luck, team! 💛

The "Schitt's Creek" creator, writer, and star channeled the same look he wore on the wedding finale of the series for this year's awards show. He even sported the same designer, which Browne told WWD was an honor.

"I am always a fan of anyone who is true to his or herself … this is true fashion … this is true style," Browne told WWD. "I like to showcase these people in any way possible. We need more people like this in the world … bravo to Dan … bravo for his bravery and leadership."

Many of the cast members decided to safely gather in Toronto, Canada, to celebrate the 15 nominations for their Pop TV series.