James Bond should not be played by a woman and writers should create female roles instead, Daniel Craig has declared.

Craig previously said that he “cannot see any reason why ultimately a woman, cannot play the James Bond character”.

But in a new interview to promote No Time To Die, his final outing as 007, he appeared to have changed his tune.

Asked if he supported the idea of “a more diverse appointment” as the next Bond, Craig replied: “The answer to that is very simple. There should simply be better parts for women and actors of colour. Why should a woman play James Bond when there should be a part just as good as James Bond, but for a woman?” 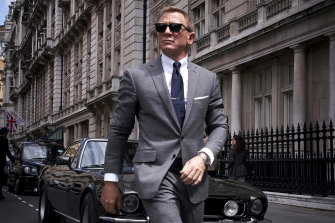 Daniel Craig in the James Bond movie No Time To Die.Credit:Eon

In the interview with Radio Times, Craig was seated alongside Barbara Broccoli, the Bond producer who has made her feelings on the subject. “James Bond can be of any colour, but he is male,” she said last year.

No Time To Die will feature a black woman in the role of 007 – albeit temporarily.

At the beginning of the film, Bond has left active service and his status is taken by a character called Nomi, played by Lashana Lynch.

Craig also has a young daughter in the film, from his relationship with Madeleine Swann (Lea Seydoux), which has led some fans to speculate that she could grow up to inherit the mantle one day. Phoebe Waller-Bridge joined the film’s writing team at Craig’s request. But he said that the Fleabag creator had been hired for her jokes, not her feminist sensibilities. 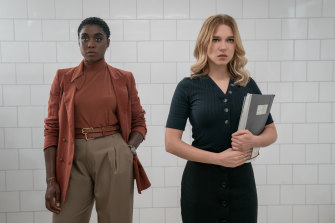 Lashana Lynch as Nomi and Léa Seydoux in No Time to Die.Credit:Nicola Dove

“She’s got a devilish humour. Her influence permeates a lot of this film. She walked that fantastic line of keeping it as a thriller and being very funny. Phoebe didn’t come in to change Bond. She came in to spice it up for sure, but she’s a Bond fan – she wasn’t about to take him in a different direction,” Craig said.

Although this will be the first Bond film produced in the #MeToo era, the actor insisted: “We’re very conscious of what’s going on in the world at the moment, but we’re still storytellers, we’re still trying to entertain an audience. We’re not trying to shove a political message, or any message, down anybody’s throats.”

However, Craig conceded that his modern interpretation of Bond is more enlightened than his predecessors when it comes to his attitude towards women.

“There are certain things attached to Bond of which we would say, ‘No, you can’t do that any more,’” he said, but added that he made no apology for Bond’s behaviour because the character is supposed to be flawed.

Over the years, some fashion-watchers have criticised Craig’s suits, noting that they are too tight.

But the actor told Radio Times that was deliberate. In Casino Royale, Craig explained, 007 had only recently come out of the SAS or SBS and “he squeezes into a suit”.

In his ensuing years as a secret agent, Bond became a more sophisticated character and “hopefully by the time I’ve finished, he’s wearing the suit, the suit’s not wearing him.”

According to the latest odds from William Hill, Tom Hardy is 5/2 favourite to replace Craig, after impressing in action films including Mad Max.

The bookmaker is also offering odds of 9/1 on Suranne Jones, the actress currently starring in BBC One’s Vigil.

No Time To Die is released in Australia on November 11.