Home » Derek Chauvin faces decades in prison, but he could serve far less

Derek Chauvin faces decades in prison, but he could serve far less

Former Minneapolis police officer Derek Chauvin will face sentencing in about eight weeks for his convictions in the murder of George Floyd. Chauvin faces decades in prison, but he could serve far less than the maximum sentence for each charge under Minnesota sentencing guidelines. 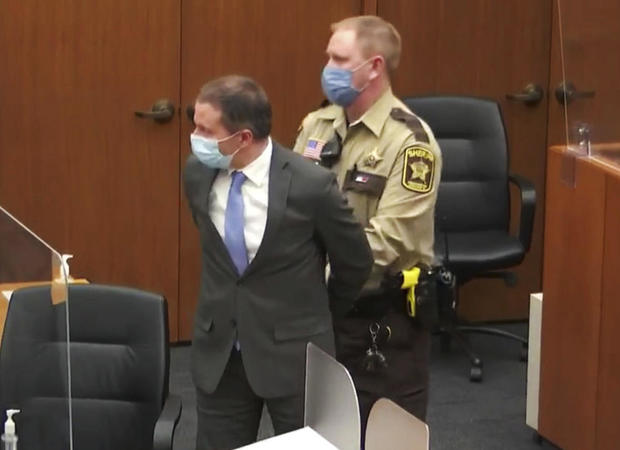 For someone with no criminal history such as Chauvin, the suggested sentencing range for unintentional second-degree murder and third degree murder is the same — from just over 10 and a half years to 15 years in prison. The recommended median sentence is 12 and a half years — the same sentence handed down in 2019 to Mohamed Noor, a former Minneapolis police officer convicted of third-degree murder for firing a shot from inside his squad car and killing a woman who had called 911.

The judge could choose to sentence based solely on those guidelines. But prosecutors have said they intend to introduce a series of “aggravating factors” that could add additional time to Chauvin’s sentence. They include committing a crime in front of a child — the youngest bystander who witnessed Floyd’s fatal arrest was 9 years old — and using police authority to commit a crime. Prosecutors have also said Floyd was particularly vulnerable, because he was handcuffed behind his back, that Chauvin acted with particular cruelty when he ignored Floyd’s pleas, and that Chauvin acted as a part of a group.

Chauvin waived his right to have a jury decide whether the aggravating factors apply, so Judge Peter Cahill will determine whether to consider them at sentencing.

Prosecutors will issue a formal written motion to request the aggravating factors in about a week, and Cahill will make his ruling a week following.  Cahill will also consider recommendations from the defense team, along with a pre-sentencing investigation report prepared by the Department of Corrections, to be issued in six weeks. The “PSI” will include an assessment of Chauvin to identify his risk of re-offending and other factors the judge can consider as he weighs a sentence, including “the defendant’s individual characteristics, circumstances, needs, potentialities, criminal record and social history, the circumstances of the offense and the harm caused by it to others and to the community.”

The report will also include “victim impact statements,” or statements written by victims to express the impact the crime has had on their lives. The judge will also weigh those statements in determining a sentence.

If the judge chooses to sentence outside the range given in the guidelines, called a “departure,” he must offer in writing “the particular substantial and compelling circumstances” that make a stricter sentence more appropriate.

Cahill will hand down the sentence to Chauvin during the sentencing hearing in June. Typically, victims are allowed the chance to read their statements in court with Chauvin present, if they choose.

Chauvin is being held at the Minnesota Correctional Facility-Oak Park Heights, the state’s only maximum-security prison, until the sentencing hearing. Chauvin is being housed in a single cell on “administrative segregation,” away from the general population, over safety concerns, a Minnesota Department of Corrections spokesperson said.