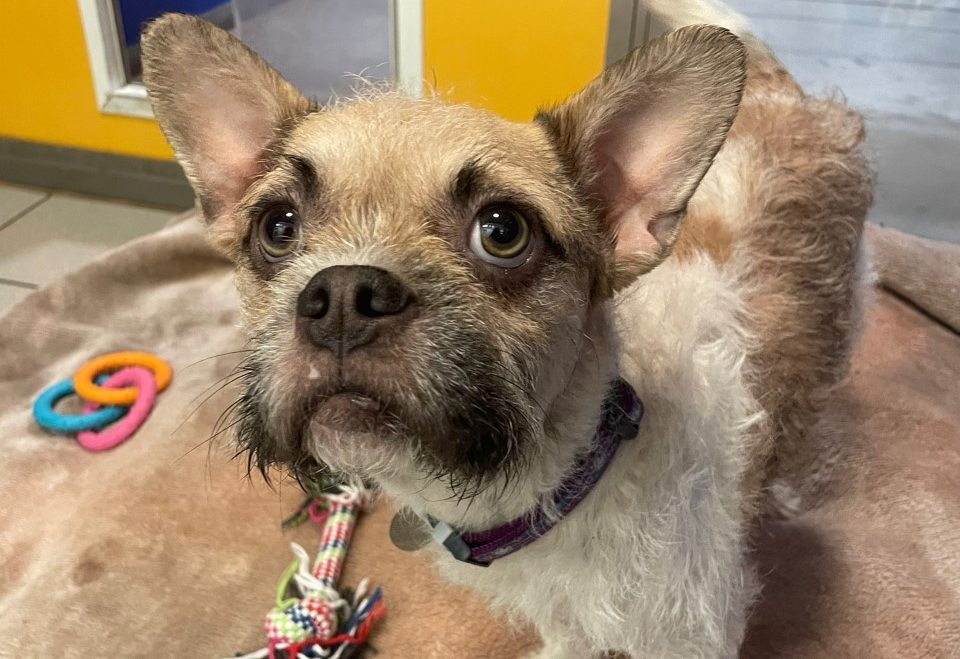 In the early hours of Christmas Eve, the Cornwall branch of the National Animal Welfare Trust received a call.

The charity were alerted to a mother dog and her two newborn puppies who’d been abandoned in the cold.

Both mum and her babies were in a bad way; hungry, cold, underweight, and terrified after being so cruelly dumped.

‘All three were covered in fleas, had stomachs swollen with worms, were anaemic and completely drained of energy,’ said an NAWT spokesperson.

‘Their energy was so low they couldn’t even lift their heads to feed.’

Despite the best efforts of staff, one of the pups (named Murphy) sadly passed away.

‘He was simply too weak to carry on,’ added the charity.

The second pup (Frankie) then started to head south and an emergency trip to the vets for fluids was made. Vets gave him IV fluids and monitored him for the afternoon, while mum (Evie) received continuous care from the team.

Thankfully, little Frankie came back to the rescue centre later that day, and both he and Evie were monitored and fed every two hours over the Christmas period.

The NAWT spokesperson recalled: ‘Things have been hard and there have been a few times we have doubted whether little Frankie would make it, but we are so proud to say that little one is a fighter, stronger than ever and has even made friends with the kittens in the cattery (although even they are bigger than him).’

Mum is also doing well, and is described as ‘very loving’ and ‘vocal’. She’s been enjoying walks with the team, getting time to herself while Frankie plays with his feline friends.

Once he is of the correct age and strong enough, Frankie will be heading to his new home, which has already been found.

Evie, however, will be in need of a loving forever family and will be eligible for adoption when she’s fighting fit.

If you think you could turn life around for this brave dog who’s been through so much, her details and an application form will be made available on the NAWT website.

The charity is also urging pet owners to seek help if they’re struggling to care for an animal rather than abandoning them.

‘We have the utmost respect for those who seek our help when they are in need,’ said NAWT’s representative. ‘Life and circumstances change and we understand this.’

They added: ‘Evie and Frankie’s story could have been so different had someone not found them and brought them to us. Help is here if you need it.’