Labrador Retriever, 10, born with jet black fur is now covered with white patches after developing rare skin condition vitiligo – and his mottled look has earned him thousands of fans on social media

A Labrador Retriever who was born with jet black fur is now dappled with white patches after developing a rare skin condition covering his entire body.

Ten-year-old Blaze, who lives in Finland with his owner Santeri Frilander, was born with a silky coat which remained a block colour for the majority of his adult life.

But last year Santeri noticed a small white patch had developed on Blaze’s ear – and the change in colour slowing started to spread across his body.

It transpired that the lightening of the hound’s fur was not due to old age, but the result of a skin condition called vitiligo, which occurs when the skin loses its natural pigments. 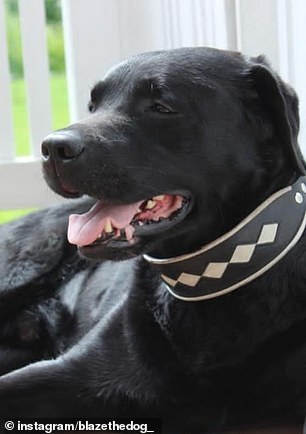 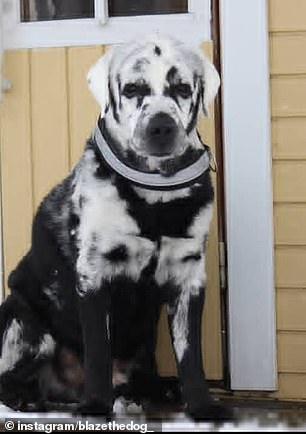 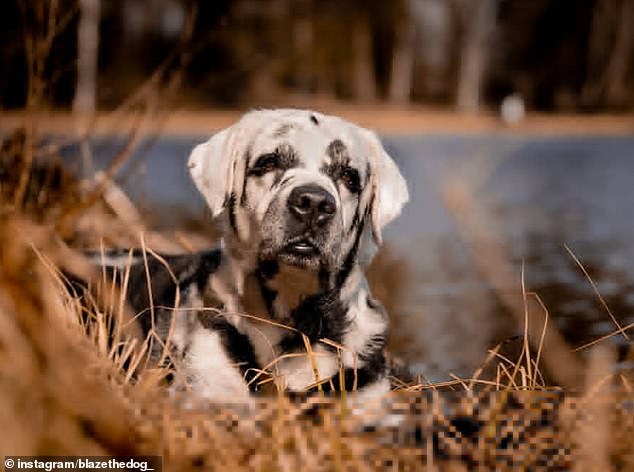 The painless condition has left Blaze with a truly unique patchwork colouring – and the dog, who has lived with the family since he was a puppy, has developed quite a fan base on social media.

Speaking to Bored Panda, Santeri said: ‘Blaze is a healthy and very energetic guy. He’s always ready to join you wherever you go. He even loves to travel inside a car.’

He added: ‘Interestingly, all of his brothers and sisters still remain single-coloured.’

While Blaze enjoys exploring the great outdoors, Santeri told how Blaze often sits waiting for leftovers at the dinner table – and the family are ‘unable to resist those brown eyes’.

Since developing the skin condition, which is particularly rare in pets, Santeri has started documenting the Labrador Retriever’s life with vitiligo on Instagram – which has garnered him 9,680 followers – and TikTok, where his profile has attracted 14,600 likes. 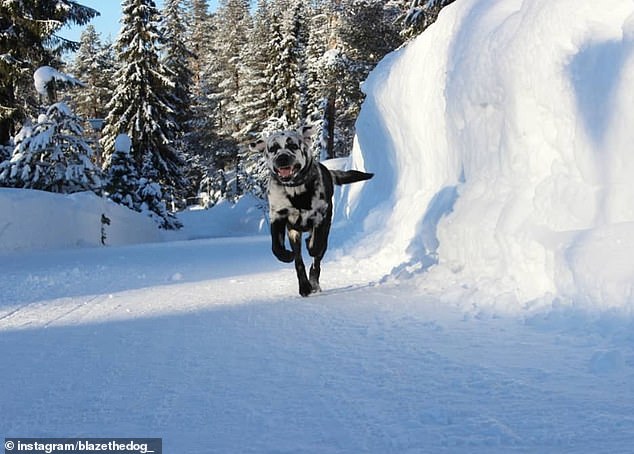 In images shared to the account, the happy hound is seen bounding through snow, enjoying woodland walks and is said to love swimming in lakes.

Santeri even threw Blaze a 10th birthday party on April 4 – complete with balloons and a cake suitable for dogs – and the spoilt mutt has enjoyed having his own playhouse since his owner’s children moved out.

Social media fans are often overwhelmed by Blaze’s beauty, with people commenting on how ‘beautiful’ and ‘handsome’ he is, despite his nickname ‘The Old Man’, according to Santeri. 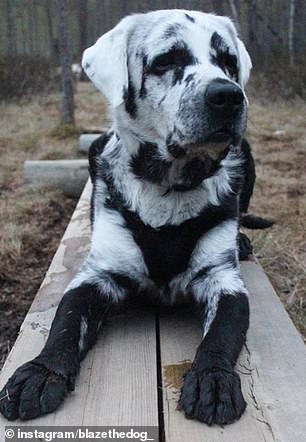 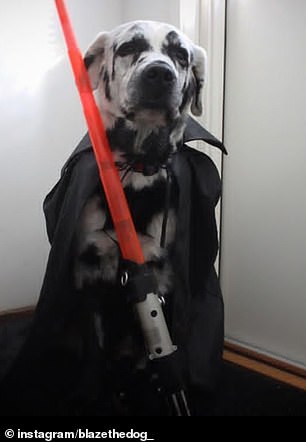 Blaze still has black paws but is mostly white on his face (left). His owner Santeri Frilander dressed Blaze up as a Star Wars character on May 4

Santeri posted a picture of Blaze to the Facebook Dogspotting Society group – with the picture receiving 32,000 reactions.

His owner captioned the adorable picture: ‘Blaze’s favourite place in the house. He is sitting next to the dining table.’

And the post was inundated with 2,800 comments praising Blaze’s extraordinary looks. 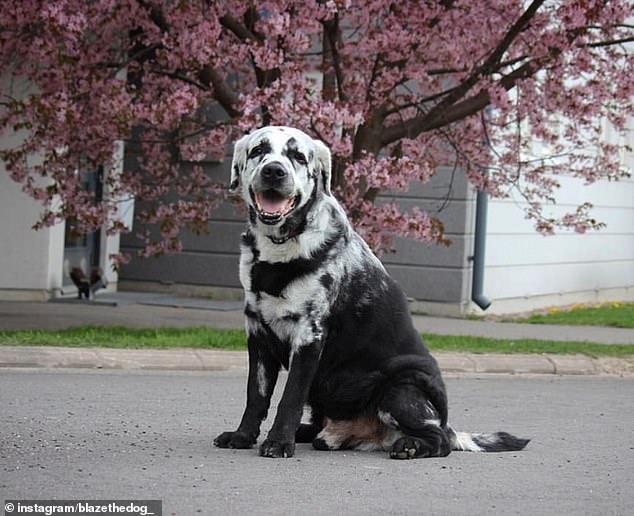 Fans are often overwhelmed with Blaze’s beauty on Instagram, with people commenting on how ‘beautiful’ and ‘handsome’ he is 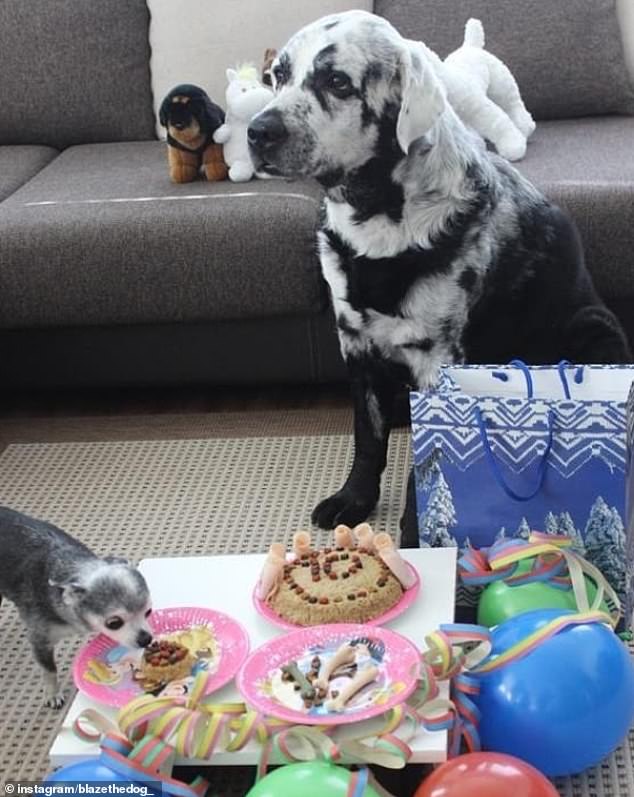 Santeri even threw Blaze a 10th birthday party on April 4, complete with balloons and a cake suitable for dogs

The post was inundated with loving comments speaking of Blaze’s extraordinary beauty.

HOW DOES VITILIGO AFFECT DOGS?

Vitiligo is a rare skin condition in pets that causes the skin and fur to lose its natural pigment.

It causes painless patches of white skin and fur which commonly affects the face, particularly the nose first, before spreading beyond to the footpads and other parts of the body.

The exact cause of vitiligo is unknown, however most cases in pets are hereditary, and some breeds are more susceptible than others.

However the condition can be caused by an autoimmune disease causing melanocytes to be attacked by the immune system after mistaking them for foreign invaders.

Owners are advised to take their pet to a veterinary practice to see if the depigmentation is caused by an underlying medical condition.

While there are no treatments, some vets recommend increased exposure to the sun to increase the production of melanocytes.

In humans the disease affects around one in 200 people, and about 50 per cent develop their first symptoms before the age of 20, though it’s not clear why.

However, ‘stressful’ events, such as childbirth, hormone changes or even cuts to the skin, may trigger it. There is also a genetic link.

There is also no cure for humans, but some treatments can reverse pigment loss if used early enough.