Dredging and levees among Warragamba options ignored by NSW government

The NSW government has ignored a series of alternatives to raising the Warragamba Dam wall that could reduce downstream flood risks at much lower than the $1 billion-plus cost of the project.

The options, from building levees to dredging the Hawkesbury-Nepean River or releasing water ahead of big rain events, were detailed in submissions developed in 2014 and 2015 and provided to cabinet, according to internal documents obtained by the Herald.

Warragamba Dam spills during the March floods. The Berejiklian government is getting closer to deciding whether to raise the wall’s height despite opposition from Indigenous and conservation groups, and from insurers.Credit:WaterNSW

The debate within government over how best to reduce risks in the flood-prone Hawkesbury-Nepean region is likely to come to a head on Monday with cabinet to discuss the long-awaited environmental impact study on the dam-wall raising.

Originally estimated at about $700 million to lift the wall by at least 14 metres, the full cost is likely to be closer to $2 billion assuming the government pays compensation for the environmental and cultural damage caused by the additional flooding within the World Heritage-listed region.

According to Infrastructure NSW documents listed as “sensitive” for cabinet use, the government has been provided with a range of measures that do not involve modifying the wall. 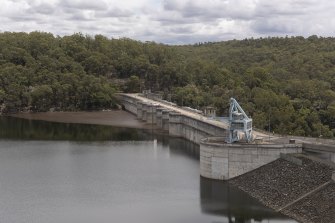 The Insurance Council of Australia has withdrawn its support for the project due to the environmental and cultural impacts of raising the dam wall.Credit:Brook Mitchell

These range from as little as $1.2 million to build a levee at Peachtree Creek or $7.2 million for a similar structure at McGraths Hill, consultants WorleyParsons estimated in mid-2015.

Another option was to divert Currency Creek, acquiring 200 hectares in the process and destroying the Chain of Ponds Reserve. That would cost $753 million.

Dredging the river, another option, would require removing 39 million cubic metres of material over 10 years. While costing about $1.643 billion, the sale of the sand would recoup more than $700 million of that sum depending on market prices for the construction material, the consultants said. 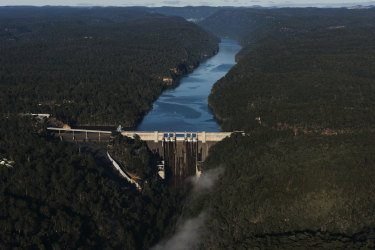 The NSW government has so far publicly backed raising the dam wall at Warragamba but documents show cabinet has been given alternatives.Credit:James Brickwood

In a document dated September 2014, a workshop by Infrastructure NSW examined a separate range of alternatives including lowering the full-supply level of Lake Burragorang behind the wall by 5-12 metres, or the release of between 40-130 billion litres over three days before a forecast deluge.

The workshop concluded the full-supply level be permanently lowered by 5 metres, upgrading the dam gates and further consideration of the 40 billion litre early release of water.

The Herald sought comment from Minister for Western Sydney Stuart Ayres who is in charge of the dam project.

Independent MP Justin Field, who chaired an inquiry on Monday into last March’s floods, said the government “was putting all of its eggs in the one basket and saying lifting the dam wall would solve all the problems. That’s simply not true”.

The inquiry heard from a range of stakeholders including the insurance industry, which earlier this year withdrew its support for the wall-raising plan. On Monday, the insurers called for a roundtable to work with the government to find a solution that would consider evacuation options, planning restrictions and other ways to manage the dam to reduce the threat of floods.

“I think at the end of the day, we’re often asked for opinion on something we aren’t the experts in, necessarily,” Andrew Hall, head of the Insurance Council of Australia, told the inquiry.

“It’s a bit difficult to back one idea if the work hasn’t been done for the full range of impacts.”

Harry Burkitt, campaign manager at the Colong Foundation for Wilderness, said without the insurance industry’s support, “it’s going to be very difficult for the NSW cabinet to simply rubber stamp the multibillion-dollar project”.

among, and, Dredging, levees, Warr
Celebrities