Dry thunderstorms stoke Bootleg Fires flames, merging it with another nearby fire

The Bootleg Fire’s fast-moving flames have merged with another wildfire in the southern region of the state with the help of gusty winds, low humidity and high temperatures. The country’s largest current wildfire is now big enough to create its own thunderous weather, prompting thousands to evacuate and destroying hundreds of thousands of acres.

Ignited on July 6 due to an unknown cause, as of Tuesday evening, the Bootleg Fire had burned 388,359 acres, which is larger than the entirety of New York City and more than twice the size of Portland, Oregon. On Monday, the Bootleg Fire merged with the Log Fire in southern Oregon, which had already burned roughly 4,800 acres.

For 10 days in a row, more than 2,000 personnel have responded to the Bootleg Fire, managing to get it 30% contained. It is one of nine large fires burning in Oregon and is the fourth largest wildfire in the state’s history since 1900, Oregon Governor Kate Brown said at a press briefing Tuesday.

“Fighting this fire is a marathon, not a sprint,” Rob Allen, incident commander for Pacific Northwest Wildfire Management Team 2, said in a statement. “We’re in this for as long as it takes to safely confine this monster.”

More than half of Oregon is currently experiencing extreme drought conditions and 89% of the state is under severe drought, where wildfire activity is high and bodies of water are very low. Winds throughout the state have reached up to 30 miles per hour, Williams said.

“That combination of drought and heat dried out the fuel, so the fuels were primed for fire, and then basically all you need is a start and wind, and that is what we’ve had for the last several days,” he said.

The wildfire continues to grow by tens of thousands of acres each day, Williams said, which has made it large enough to control the area’s weather. He said as hot air rises into the stratosphere and cools, pyrocumulus clouds, which have the ability to create their own lightning, are produced on top of the fire’s smoke column.

He said the dangerous lightning activity from pyrocumulus clouds is commonly seen within extreme fire behavior, but that the Bootleg Fire is the biggest and most active fire that he’s ever been assigned to work on. 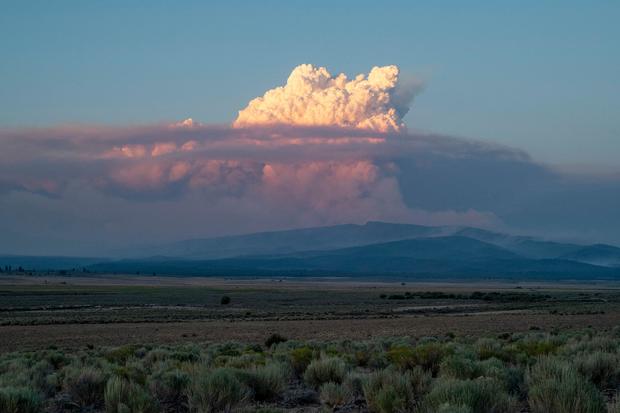 Red flag warnings, which signify that critical and potentially life-threatening fire conditions are occurring or soon will be in a particular area, have been issued by the National Weather Service throughout Oregon. Evacuations for residents are quickly changing and at least 21 properties and 54 other structures have been destroyed, according to Reuters.

Thunderstorm clusters with lightning are predicted to move across the state in the coming days, the National Weather Service in Pendleton, Oregon, said. Seasonally warm and dry temperatures up into the high 90s for certain counties are forecasted throughout the state for the rest of the week.

“The future for us for the remainder of the season continues to look above normal dry and above normal temperatures,” the chief of fire protection at the Oregon Department of Forestry, Doug Grafe, said Tuesday at a briefing. “This is not going to return to normal anytime soon, so we’re facing a long difficult fire season.”

A look at the high temperatures expected through the rest of the week and into the weekend.

Josh Dozor, former deputy assistant administrator of the Federal Emergency Management Agency and the current general manager of medical and security assistance at International SOS, told CBS News that the general pacing of mitigation for wildfires is not keeping up with increasingly worsening seasons. He cited changes to infrastructure like distancing buildings from trees and brush as necessary mitigation strategies moving forward.

He advises residents in affected areas to make evacuation plans, keep track of and heed local updates and for businesses to create clear policies for their employees in the event of a fire.