The Australian economy faces significant risks from a net zero future regardless of domestic policies, with a major consulting firm warning the nation’s exports are more heavily exposed to the emissions policies of major trading partners.

The economy is at a greater risk from a global shift towards net zero than local climate change policies, modelling from major consultancy firm EY shows, with about 85 per cent of the value of Australian exports used for goods that require emissions-intensive production processes. This is up from 55 per cent 40 years ago. 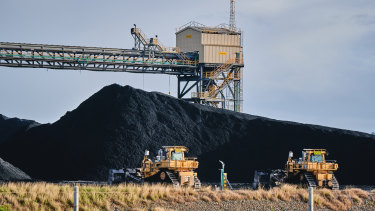 EY chief economist Jo Masters said the modelling did not consider the benefits of shifting to net zero, but showed how exposed the nation was to decisions made by other nations’ governments. On these estimates, 64 per cent of the risks to GDP from the shift to net zero are due to abatement policies from major trading partners, with less of the risk due to local emissions plans.

“We need to have a really keen eye on the policies that our trading partners are committing to, the timeframe of those and their plan to get there,” Ms Masters said.

She said 82 per cent of Australia’s exports went to countries with significant net zero commitments that have either been legislated, proposed or have been promised in official government documents. Australian Bureau of Statistics data shows goods and services exports were worth almost $50 billion in August.

“We are exposed to a lot of decisions that our trading partners make,” Ms Masters said. “The message is that the adjustment that we need to make is coming regardless of what path we choose to take for our own emissions.”

However, this model assumes there is no change in technology in the intervening years until net zero promises are met. There are some growing sectors where there may be opportunities for exporters.

“By mid-century our economy will need to look different from how it looks today.”

Deloitte Access Economics’ Investment Monitor released on Monday also references potential opportunities for exporters as more nations sign up to a net zero future, including strong demand for gas as countries look to reduce their carbon emissions. Australia’s liquefied natural gas exports to China were at record levels over the last 12 months.

As electric vehicles and renewable energy generation options become more popular, the demand for nickel, copper, lithium and cobalt is expected to increase. The International Monetary Fund forecasts the average lithium and cobalt consumption to be six times higher in the decade starting in 2030 compared to the last 10 years under a net zero by 2050 scenario.

“For each of these metals, Australia is in the top three countries in the world by share of global reserves,” Deloitte says.

“Yet there is additional upside risk for Australia in rising global demand for the metals needed to drive the shift towards less carbon intensive forms of electricity generation and storage.”

Get daily updates on the climate summit that will shape our future. Sign up to our COP26 newsletter here.