Eleanor Torrey West, Preserver of Her Inherited Island, Dies at 108

Eleanor Torrey West, who dedicated her life to preserving Ossabaw Island, a 26,000-acre inheritance off the coast of Georgia so large, lush and varied in terrain that visitors could walk among hardwood forests, palm tree stands and salt water marshes, died on Jan. 17 at her home in Savannah. She was 108.

Her death was confirmed by her grandson Beryl Gilothwest.

Mrs. West was a pioneer of mainstream environmental conservation, embracing it well before most Americans. In the 1960s, for instance, though struggling with the financial burden of maintaining Ossabaw Island, which her parents bought in 1924, she rebuffed lucrative offers from developers and instead sold the island to the State of Georgia for $8 million, half of the island’s appraised value. 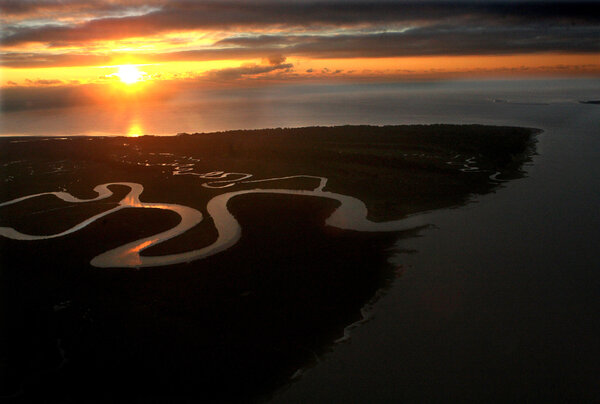 In a statement released after her death, former President Jimmy Carter, who met Mrs. West in the 1970s when he was the governor of Georgia, lauded her “dogged determination to preserve Ossabaw for future generations” even if it meant “giving up the fortune she could have realized from its development.”

The third largest of Georgia’s barrier islands, Ossabaw in 1978 became the first parcel of land protected under the Heritage Trust Act, which was established in 1975 to preserve natural areas from development and allow public access for recreation and research.

“She knew that if it was conveyed to the state, it belonged to the people,” Mr. Gilothwest said. “There was the possibility for her and others to apply public pressure on them to make sure that they were keeping their promise to protect the island.”

While Mrs. West wanted to share the wonders of Ossabaw with others, she did not want airstrips built or a ferry route drawn to shuttle visitors there. The island is the state’s only heritage preserve that prohibits many recreational activities, according to the Ossabaw Island Foundation.

“Whatever happens to one of these large islands involves the other islands,” Mrs. West told a 1968 conference on preserving Georgia’s marshlands, “and as a consequence the entire coast of Georgia, and perhaps the eastern coast of the United States.”

Mrs. West lived on the island, which is accessible only by boat, until she was 103 and required a full-time caretaker.

The island is home to a variety of birds, sea turtles and even feral pigs, which were believed to have been introduced by Spanish explorers in the 16th century. Mrs. West kept some of the animals as pets, including Lucky, who was injured by a hawk as a piglet; she nursed him back to health in her laundry room.

“They used to go on walks around the island,” Mr. Gilothwest said, “and then he would lie down on a riverbank, and she’d lean her head on his belly and read a book.”

Eleanor Ford Torrey, known to her friends as Sandy, was born on Jan. 17, 1913, in Michigan to a family of wealth and privilege. Her mother, Nell Ford Torrey, was an heiress and granddaughter of Jean Baptiste Ford, who founded the Pittsburgh Plate Glass Company and Wyandotte Chemicals Corporation. Her father, Henry Norton Torrey, was a brain surgeon. During her childhood, the family split time between their home in Grosse Pointe, Mich., and Savannah. Her parents purchased Ossabaw Island as a winter retreat.

Mrs. West’s love for Ossabaw was not immediate. On her first visit, she “spit on the ground and vowed never to love this island,” Elizabeth DuBose, the executive director of the Ossabaw Island Foundation, said in a phone interview.

But the island grew on her, and she and her brother would abandon lessons with their tutor to explore its nearly 40 square miles of forests, fields and marshes.

Mrs. West attended the Masters School, a premier finishing school in Dobbs Ferry, N.Y. After her parents had died and after her brother died in 1947, she and his children inherited the island in 1959.

Soon after, she returned to Ossabaw with her second husband, Clifford Bateman West, an artist, and in 1961 they founded the Ossabaw Island Project, a retreat where artists, scientists and writers could convene to share ideas and draw inspiration from the natural surroundings. The program, which lasted until 1983, drew novelists like Ralph Ellison and Margaret Atwood and composers like Aaron Copland and Samuel Barber, as well as the artist Harry Bertoia.

Another participant, the biologist Eugene Odum, had a particular influence on Mrs. West, her grandson said. He would take visitors to the marsh and explain to them how the stalk-like grass collected food for fish, allowing them to thrive and in turn provide food for the entire coastal area. Developing the land could endanger the entire ecosystem, he would explain.

“I think that was hugely influential on my grandmother in terms of her understanding of how important it was to preserve that land,” Mr. Glithowest said.

Last year, a bill was introduced in the State Legislature that would have allowed for the development of up to 15 acres on each of Georgia’s more than 120 heritage preserves. Ms. DuBose, of the Ossabaw Island Foundation, said the group called on its partners to oppose the bill, which never made it out of committee. Their effort echoed Mrs. West’s fight over the decades to preserve the land.

“We must consider what has been done in the past,” she wrote in a document describing her vision for the future of Ossabaw, “and we must try to see the future as a long-term concept before we alter the present. I believe man would do well to watch where he treads, as he is the only creature that leaves indelible footsteps that keep running uncontrollably without him.”