The uptake of electric vehicles in Australia is too slow, a Liberal federal MP has told Parliament, and the industry needs to be supported by tax breaks and free tollways.

Federal MP for North Sydney Trent Zimmerman has called on the federal government to cut its luxury car tax and for states to offer lower registration charges for electric vehicles.

He said he would advocate for a taskforce to help introduce such changes. 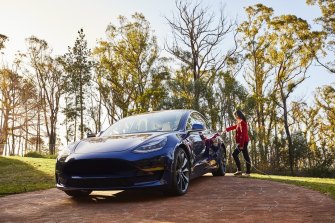 The uptake of electrical vehicles in Australia is not moving swiftly enough, a Liberal MP says.

“If we are to achieve net zero emissions by 2050, which surely must become our goal, it must be a focus of our work,” Mr Zimmerman told Parliament on Monday, noting that 19 per cent of Australia’s greenhouse gas emissions come from the transport sector.

“The average age of cars on the road today is just over 10 years,” he said. “Working back from 2050 means that, to reach net zero, we need to adopt the goal of reaching close to 100 per cent electric or other low emission vehicles in the new car market by the mid 2030s.”

Electric vehicles make up less than one per cent of new car sales, compared with a global average of 4 per cent and over 50 per cent in leading countries such as Norway.

Mr Zimmerman called on Australian governments not to follow the path of Victoria and South Australia in introducing road user charges for electric vehicle owners. He called for other states to adopt NSW plans to replace its bus fleet with 100 per cent electric or low emission vehicles by the end of this decade.

During an online forum last week, hosted by the conservative environmental group Coalition for Conservation, its chair Cristina Talacko said she believed there was “a bit of a lack of policy” in the electric vehicle area, and as a result electric car manufacturers were directing their product to other markets, causing a shortage in Australia.

He said on Tuesday he believed an electric vehicle task force should be constituted via the national cabinet to make sure state and federal governments worked together.

“It is an idea I will be pursuing with the Treasurer and the Prime Minister,” Mr Zimmerman said.

He said while he understood why governments were concerned that fuel excise revenues would fall as electric vehicles were adopted, he did not believe purchasers should be hit with a Victorian-style road user charge until the industry had matured.

Mr Zimmerman welcomed his government’s release of its “Future Fuels Strategy” discussion paper, which prioritised government support for charging infrastructure and fleet purchases, but not for subsidies for individual consumers or an end date on the sale of internal combustion engines.

But he said more needs to be done to ensure the transport sector reaches net zero in time to meet Paris Agreement targets.

Major carmakers including General Motors and Ford have declared plans to phase out internal combustion engines by 2035, while many cities, states and countries have said they will ban such vehicles in the coming years.

Science and health explained and analysed with a rigorous focus on the evidence. Examine is a weekly newsletter by science reporter Liam Mannix. Sign up to receive it every Tuesday.