The long and uneasy relationship between religion and major-party politics has returned with a vengeance in Victoria, despite a precipitous drop in Christian adherence in every age group and every electorate in the state.

Liberal leader Matthew Guy is experiencing the latest pain amid revelations of Liberal branch stacking by Pentecostal church groups in Gippsland and the controversial teachings of the ultra-conservative City Builders Church, to which one of Guy’s high-profile candidates is linked.

That the controversy is unnerving a number of moderate Victorian Liberal figures is unsurprising.

There was a time when political leaders made it their business to be seen attending church services. Kevin Rudd, when he was prime minister, even held press conferences outside the church he attended in Canberra.

Scott Morrison, Australia’s first Pentecostal prime minister, invited the media to film him in his Horizon Church in Sydney’s south, holding his arms aloft while praying.

But displays of church-going have been notably absent during the current Victorian election campaign, despite both Guy and Premier Daniel Andrews having publicly declared themselves Christians.

A search of The Age’s pictorial files unearths numerous pictures of Guy and Andrews attending mosques, synagogues and various temples. But other than attendance at state memorials and funerals, there is not a single picture of either leader attending church for Christian worship.

They and their advisers have, perhaps, noted that Morrison’s church-going did not save his government from a crushing defeat earlier this year, or that some observers believe his public displays and statements about his faith – including that he secretly practised the laying on of hands when comforting disaster victims – worked against him at the ballot box.

Guy in particular might have noted the fallout from Morrison’s enthusiastic support for the candidature of Katherine Deves in Tony Abbott’s old seat of Warringah.

Deves’ negative attitude towards transgender people was widely supported by conservative Christians, but was seen by many others as a key ingredient in the Liberal Party’s rout in moderate electorates across the nation. 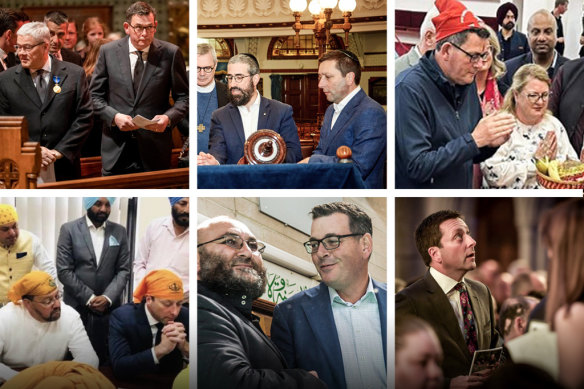 Guy and Liberal chiefs are now being accused of ignoring warnings from Coalition MPs about the political risks in the upcoming Victorian election of candidate Renee Heath’s membership and activities the City Builders Church, based in Sale, Gippsland.

Guy, having left it too late to disendorse Heath – who he previously defended – has tried to limit the damage by saying she will not be permitted to sit in the Liberal party room.

It may not have helped him much. The Australian Christian Lobby has now rounded on Guy, accusing him of hypocrisy in his attitude to Heath.

Paradoxically, the eruption over religious practice and attempts by conservative Christian figures to infiltrate the Liberal Party coincides with census data showing that for the first time, fewer than 50 per cent of Victorians identify as Christian.

Census data shows the proportion of Christians of voting age in Victoria has crashed by almost 20 percentage points in the past 10 years.

The Age’s data journalist Craig Butt reports that 62.7 per cent of the state’s voting-age population identified as Christian in 2011. This figure dropped to 52.9 per cent in 2016 and fell even further to 43.8 per cent in the 2021 census.

Over that same period, the percentage of Victoria’s voting-age population professing to follow other religions (which includes Buddhism, Hinduism, Islam, Judaism and Sikhism) increased from 10.2 per cent in 2011 to 14.1 per cent in 2021, largely driven by migration.

In all 88 Victorian state electorates and in all age brackets, a significantly lower proportion of the voting-age population identified as Christian than in the census of 10 years ago.

Those with long memories within Premier Daniel Andrews’ Labor Party would recognise the risks of being drawn into religious-political bitterness.

The acrimonious Labor split of the 1950s continues to haunt Labor. Catholic-led ALP members based in Victoria quit the party over communist influence, and established the Democratic Labor Party.

The Labor Party was kept out of power federally until 1972 and in Victoria until 1982.

In a contemporary twist, the controversial Catholic MP Bernie Finn is contesting the current election as leader of the latest iteration of the DLP. Finn was expelled by the Victorian Liberal Party this year for declaring that abortion should be banned in Victoria, even for rape survivors.

Andrews, a Catholic himself, found himself in the lead-up to the current election accused by no less the Catholic Archbishop of Melbourne, Peter Comensoli, of stirring division in the community.

This followed the Premier’s criticism of the appointment of Essendon Football Club chief executive Andrew Thorburn, who is also chairman of a conservative church known as City on a Hill.

The church’s website carried sermons likening abortion to concentration camps and included claims that “practising homosexuality is a sin”.

Andrews called such views “absolutely appalling”, and labelled them as “bigotry”. Thorburn, told by Essendon’s chairman he couldn’t continue as chief executive if he remained chairman of the church, chose to quit his job with the Bombers and to stay with his church.

Matthew Guy at the time described Essendon’s treatment of Thorburn as “ridiculous”.

Now, with just days to the state election, Guy’s view has come back, via conservative Christians, to spook him.

The Victorian director of the Australian Christian Lobby, Wendy Francis, equated Thorburn’s treatment with Guy’s edict that Renee Heath will not be allowed to sit in the Liberal party room.

“In a display of hypocrisy, Victorian Liberal leader, Matthew Guy, has followed the Essendon playbook in promising to expel a democratically selected Liberal candidate, Renee Heath, because of her church affiliation,” Francis said this week.

“Armed only with scurrilous, unsubstantiated, serious allegations, all of which are denied by Ms Heath, Mr Guy’s outburst has Victorians of faith concerned that they and their vote are not welcome in the lead up to Saturday’s election.”

Andrews, it happens, used the Thorburn controversy to define his approach to Catholicism.

“I’m not here to be having a debate with faith leaders but I will just say this: I am a Catholic. I send my kids to Catholic schools,” he said at the time.

“My faith is important to me. It guides me every day. It also guides me in my sense of what is right and what is wrong, and if I can just say with utmost respect, calling out homophobia is not the problem. Homophobia is the problem.”

Guy made his own Christianity a centrepiece of his first parliamentary speech after being elected in 2006.

“I want to state loudly and proudly to this chamber that I am a Christian,” Guy said. “My faith has always been something that has given me personal strength and guidance, and it has always been a powerfully positive force in my life.”

But now, he and other leaders of mainstream political parties are finding themselves targeted by conservative Christians who are actively supporting Christian infiltration of the political process.