Film review: Family comedy My Spy is weird but worthwhile

The American movie awards season is upon us, and through arthouses and mainstream multiplexes alike files the parade of contenders, with their star-studded casts, high production values and forward-thinking messages. In the midst of all the hoopla, hopefully at least a few cinephiles will find time for My Spy, a formulaic yet eccentric family action-comedy from the light entertainment specialist Peter Segal, whose long career has not to date brought him within sniffing distance of the Oscars. 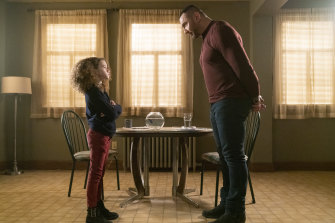 Chloe Coleman (Sophie) and Dave Bautista (J..J.) in My Spy.Credit:

That said, over the years Segal has worked with plenty of big names, from Adam Sandler to Robert de Niro to, most recently, Jennifer Lopez (in the comedy-drama Second Act). His star here is more of an up-and-comer, as far as the movies are concerned: the hulking former pro wrestler Dave Bautista, whom you may recognise (or not) as Drax the Destroyer, the fearsome yet amusingly literal-minded alien warrior from Guardians of the Galaxy.

Bautista’s role in My Spy is similar, though he’s back on earth and no longer hidden behind layers of highly coloured make-up. He plays J.J., a daredevil CIA operative whose talent for wiping out America’s foes is offset to a degree by his lack of people skills.

Under fire yet again for his cowboy antics, J.J. is offered one last chance: the demeaning domestic assignment of keeping tabs from afar on single mother Kate (Parisa Fitz-Henley) and her nine-year-old daughter Sophie (Chloe Coleman) who have just returned from France where their family is said to have terrorist ties.

As if this wasn’t bad enough, J.J. is forced to work with a partner, a mousy computer expert named Bobbi (Kristen Schaal, channelling Kimmy Robertson from Twin Peaks). Having installed themselves in the same Chicago apartment building as their targets, the pair have plenty of time to squabble, especially as their sophisticated surveillance equipment reveals no immediate trace of suspicious activity.

What J.J. and Bobbi haven’t counted on is that little Sophie is a more naturally gifted spy than either of them. Not only does she swiftly see through their assumed identities, she proves herself an expert negotiator, forcing J.J. to grant her one favour after another – accompanying her to school, taking her ice-skating and so on – in exchange for not blowing his cover.

A brainy young girl and her “gentle giant” buddy: it’s a stock set-up in 21st-century Hollywood, seen for instance in the Transformers spin-off Bumblebee or the Wreck-It Ralph films. Yet much of the humour here has a willfully dark, queasy streak (still more marked than in the animated Spies in Disguise, the other family friendly spy spoof of the moment).

As a state-sponsored killer, J.J. insists that his victims all deserved what they got – but we’ve already heard him musing, in an offhand but clearly earnest manner, on the possibility of getting Sophie herself out of the way. Then there are the jokes about him being mistaken for a child molester, and the undeniable creepiness of his spying on Sophie and Kate via the hidden cameras installed in every room of their home.

Yet all this is laid out so bluntly it’s hard to take much offence, even if you might wonder what message Segal and his writers could be trying to convey (especially at the somewhat incoherent climax, which suggests reshoots at the last moment). The charm of the film lies exactly in its mix of tones and genres: globetrotting action is pitted against domestic comedy, with the latter triumphing over the former.

In other words, Sophie’s viewpoint wins out over J.J.’s , as more grounded and, in a sense, more adult. Moreover, the domestic plot has its own spatial logic, which may remind buffs of Vincente Minnelli’s 1963 classic The Courtship of Eddie’s Father: two apartments on opposite sides of a corridor, and a precocious, needy child who strays between them. Seeing all this worked through is a modest pleasure – and modest pleasures these days aren't the most common things in the world, least of all on the big screen.