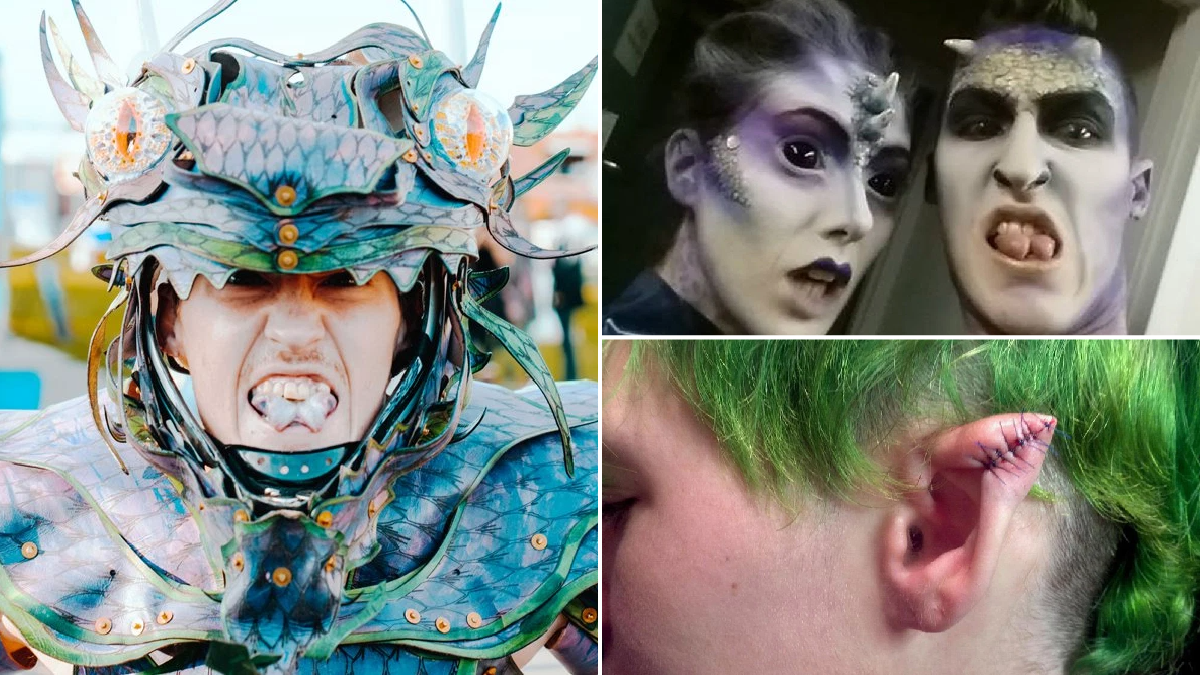 A fire-breathing performer has spent £11,000 on procedures to look like a dragon, and plans to get more.

Joshua Burns, 30, has, among other things, had his eyeballs tattooed, silicone ‘horns’ inserted into his forehead and scales carved into his arms.

The fire-breather and reptile seller, who goes by his last name, has his heart set on becoming the most modified person in the world.

Burns started his body modification journey when he was 19 and had his tongue split in two.

Since then, Burns, of Vancouver, Canada, has also had his earlobes cropped and ears shaped to look pointed, dyed his tongue purple, and has had thousands of pounds worth of tattoos – one of which took a whopping 51 hours to finish.

He wants to get his gums and penis tattooed at some point.

Burns said: ‘I want to be 100 per cent covered as a dragon, and beat all the world records out there for the most modifications and tattoos. But I also want to look aesthetically pleasing.

‘I’m liking where I’m at currently but every time I get another tattoo or another modification, I feel more confident and happier – and it helps with my career.’

His girlfriend, Tristan Risk, 40, entirely supports his plans to continue his dragon transformation.

Burns was ‘obsessed’ with reptiles when he was a child, and began working at carnivals as a teenager, eventually becoming a street performer and juggler.

With a Mohawk and several piercings, his parents hoped his alternative look would just be a phase, but not long after he left home at 18 he got his first tattoo – a dragon heart on his chest.

After a friend of his in the juggling community got his tongue split, Burns was intrigued.

He said: ‘I saw it and immediately thought,”I want that” because reptiles have split tongues too. I didn’t see any downside to having it.

‘I already had all these piercings, so it wasn’t that far-fetched for me.’

‘I absolutely loved it when it was finished,’ he said.

‘I felt like I was becoming the person I was meant to be.’

Not long after the procedure, Burns and fellow forked-tongued juggler got in a camper van and travelled around the USA, finding work in a ‘freak show-themed drag show’ – which inspired him to learn more extreme tricks.

Now, Burns’ acts involve him walking on glass, breathing fire, putting nails up his nose and suspending himself by the skin from piercing metal hooks.

The more extreme his act got, so too did his appearance.

When he was between 21 and 26, Burns got at least one body mod procedure and large tattoo done a year.

In 2017, he even had scarification done, which involved using a scalpel to cut his skin and form a scale design.

‘I didn’t have any anaesthetic – it was about three times as painful as a tattoo. I livestreamed it, so I had to keep it together,’ he joked.

‘I’ve also had my eyeballs tattooed. They injected the purple dye in a little spot, and then it spread around my eyeballs.

‘I needed ten shots in total to get it right. I have a different relationship to pain than most people because of my work, so it wasn’t too bad for me.

‘It is hard to explain, but it felt like an eyelash stuck in my eye.

‘I was most nervous about getting this done, because if anything did go wrong, I was risking my eyesight.

‘So far, it has been absolutely fine though – I need reading glasses now, but I don’t think that has anything to do with the tattoos.’

Even though his eye tattoos went off without a hitch, not all of Burns’ procedures have gone the way he wanted.

Burns said: ‘When I had my ear cropped, I wanted a jagged effect, like a dragon.

‘But when it healed, the points rounded out, which wasn’t quite what I was going for.

‘I might get them tattooed to look more pointed at some point. It’s hard to know how the human body is going to react.’

On top of that, one of his acts went wrong in 2015, causing a mishap with one of his horns.

‘At the end of my act, I’d put my face in the glass and ask a gentleman weighing around 200 pounds (14st) to stand on my head,’ he explained.

‘It was a new glass kit and my face slipped slightly, cutting open my horn, which then popped out.

‘I had to get it stitched up and couldn’t get it put back in for 18 months, which was really upsetting. I was a unicorn rather than a dragon.’

Burns is used to people pointing and staring at him while he’s out in public, saying: ‘I don’t take it personally – I made the choice to look this way, so it’s only natural people would be curious.

‘If people make nasty comments, I don’t really care about the views of anyone who doesn’t respect me. What is important to me is that I’m happy.’

For anyone who’s curious, he set up a YouTube channel in 2020 called Burns the Dragon TV, where posts videos in which he discusses his procedures and interviews other body mod fans.

‘It can store 500MB of data on there, Bitcoin currency, and you can even use them to unlock doors,’ he explained.

‘It works using the same technology as the chips in contactless cards. It’s the future.’

Burns is next hoping to go to tattoo convention Ottawa-Gatineau Capital City Ink Fest for a 70-hour inking, and one day plans to get his genitals tattooed.

He’s also hoping to get silicone ‘scale’ implants in his arms, which he believes will help him boost the price of his shows.

Burns said: ‘I don’t think I’ll ever stop getting body modifications – new ones come out all the time, so I don’t want to limit myself. But I want them to look good too.

‘People in the body modification community are awesome. Some assume we might steal from them because of how we look – but actually we’re probably the most likely to help an old lady cross the road.

‘We aren’t bad people. In fact, we’re some of the most genuine people you’ll meet, because we aren’t afraid to express our true selves.’

Burns has found a staunch cheerleader in his girlfriend Tristan, whose stage name is Little Miss Risk.

The two met six years ago backstage at a performance, and they now share a home, four six-foot snakes and a lizard together.

Even though the only body modification she’s had done is getting a chip in her hand like Burns, she totally supports his body mod plans.

‘I’ve always had a thing for dragons, so I love it,’ she said.

‘Burns’ modifications have kind of become invisible to me because I’m so used to them.

‘It always strikes me as unusual when people stare if the two of us go out somewhere, and then I have to remind myself. People are just curious, I get that.

‘Everyone should have the right to express themselves and make themselves look on the outside the way they feel on the inside.

‘As long as they aren’t hurting anyone else, they should do what makes them happy.’