Home » Lifestyle » For our federation to succeed, states and Canberra must work together

For our federation to succeed, states and Canberra must work together

It took decades of debate to convince the six self-governing Australian colonies to finally agree to a national government. Up until January 1, 1901, when the British Parliament approved the creation of the Commonwealth of Australia, each colony had its own government which raised revenue and managed its own affairs, including everything from a small defence force to printing its own postage stamps.

Even with the birth of a national government, only over the course of decades did the colonies, rebadged as states, give up some of their powers. That transfer of authority has continued to a point where more recent debates on Australia's federation often advocate scrapping the states altogether. 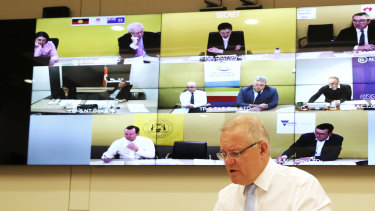 But we have had some of the worst bushfires in the nation's history and, of course, the pandemic. These crises meant the states once again took centre stage.

They revealed what should have been obvious all along: while the national government has gathered enormous powers since its inception, the states still have substantial resources at their disposal. Without the states' extensive emergency services, the bushfires would have wreaked even more havoc. And without their police and health workers, no testing, contact tracing or quarantine regime would have worked.

It has been a frustrating experience for Prime Minister Scott Morrison and the federal government, who consider themselves the top tier of government in Australia, one where the greatest expertise and most substantial resources reside.

The cracks in that perception were most obvious during the bushfires, with Mr Morrison coming late to the scene before taking on his national leadership role. While he eventually helped co-ordinate the firefighting efforts and offered up defence force personnel, he was always playing second fiddle to the premiers. When the COVID-19 pandemic struck, he was not going to be caught out again.

Mr Morrison quickly established the national cabinet, which included state and territory premiers and chief ministers, for practical reasons and to enforce his leadership role. The existing state-federal Council of Australian Governments framework was never going to respond quickly enough to contain a pandemic, and sitting at the head of the table gave the Prime Minister the apparent authority he wanted.

But the limits of federal powers became obvious when several states started closing their borders despite protests from Mr Morrison, and there were often sharp differences over the extent of social-distancing restrictions.

Even so, during the pandemic the states have relied heavily on Canberra to offer defence force personnel, to negotiate the overseas purchase of personal protective equipment and vaccines, and to use its deep pockets to cushion the economic blow through JobKeeper, JobSeeker and temporary free childcare.

So where do these crises leave Australia's federation nearly 120 years since its formation?

But as the recent bushfire royal commission pointed out, and the national cabinet made apparent, what is essential in making the federation work at its best is making sure the right structures are in place to ensure that the various levels of government work effectively together. That is no easy task. The recent cases of individuals slipping through the international airport in Sydney and making it, unquarantined, to Melbourne are a case in point.

These structures also need to be consistently updated to suit the times. Professor Rory Medcalf’s recent suggestion that states should have in their armoury a number of security-cleared officers to deal with threats from foreign actors would be an example.

These things must be a priority. The ongoing economic impact of the pandemic, the existential threat of climate change and the growing conflict with China are just some of the challenges facing Australia, and the members of our federation must work together as effectively as possible to deal with them.

Note from the Editor

The Age’s editor, Gay Alcorn, writes an exclusive newsletter for subscribers on the week’s most important stories and issues. Sign up here to receive it every Friday.

federation, for, Our, succeed, to
Celebrities