A former supreme court judge has labelled the federal government’s $660 million car park fund “corruption” amid warnings that ministers may have breached laws that required them to spend taxpayer funds in an efficient and ethical way.

The damning assessments heighten the debate about decisions by Prime Minister Scott Morrison and key ministers to choose the car park locations in the lead-up to the last election, with 77 per cent of the projects located in Coalition seats. 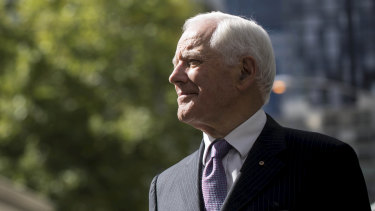 David Harper QC said the car parks program appears to be an instance of taxpayers’ money being spent with a view to advancing the interests of the government.Credit:Arsineh Houspian

The Auditor-General revealed the “inadequate assessment” of the projects in June and a parliamentary inquiry grilled department officials over the program this week, leading former Victorian Supreme Court judge David Harper, QC, to warn about the misuse of public funds.

“The commuter car parks program certainly appears to be an instance of taxpayers’ money being spent not after an assessment of greatest need but rather with a view to advancing the interests of the government,” he told The Sydney Morning Herald and The Age.

“On any appropriate definition of corruption, this is an instance of it; and it should be called out as such.”

Mr Harper served on the Supreme Court from 1992 to 2013, was awarded an Order of Australia in 2008 and is an advocate for a national integrity commission to improve accountability in government.

Mr Morrison and ministers including Alan Tudge, who was the minister for urban infrastructure at the time, allocated $389 million to the car parks on the day before the Prime Minister called the last federal election, sparking a rebuke from the Auditor-General for failing to safeguard taxpayer funds.

Labor has likened the National Commuter Car Park fund to the “sports rorts” scheme that put federal money into local sporting facilities, and which raised questions over whether the government had authority under the constitution to spend the money.

University of Sydney professor Anne Twomey, who pointed out the constitutional question over the sports scheme, said the spending on car parks was authorised by the National Land Transport Act but raised questions under other laws.

“It is screamingly obvious, when you look at the Auditor-General’s report, that the grants did not fall within the category – at least some of them – of being economical or being efficient,” she said.

“There was inadequate planning, inadequate consultation, the costs were well outside anything that could be regarded as economical in relation to some of them.

“Ministers were under an obligation to make sufficient inquiries to be able to satisfy themselves of those things and clearly have failed to do so. So there is certainly breaches of the law.”

But there are no penalties for the breaches, highlighting the role of Parliament in holding the government to account for any bias in the way grants were made to projects in seats the Coalition needed to win to hold onto power at the last election.

Labor’s accountability spokeswoman Kristina Keneally, in an address to the Accountability Round Table on Wednesday evening, accused Mr Morrison of “normalising” misconduct.

She said in “normal times” there would be a fatal backlash against the government for overseeing the Commuter Car Park Fund or the Community Sports Grants program.

But the community’s focus on the coronavirus pandemic was helping blunt the traditional political fallout from its actions.

“Given the scale of what we are experiencing, perhaps people aren’t angry enough. Taxpayer money is being spent as Liberal Party money – at a disturbing rate, and with a brazen disregard for the principles of good governance and accountability,” she said.

“The Prime Minister is on a mission to normalise his misconduct because he believes that it’s a sure-fire way to get re-elected. The Australian people aren’t dumb – but they’re becoming numb to the wholesale rorting and waste of the Morrison government.”

Senator Keneally said there had been a deterioration in the public’s faith in institutions, with the government’s misuse of public money making the situation even worse.

“For all its virtues, democracy is a fragile institution. We saw vivid proof of that in January this year, the US Capitol Hill terrorist attacks, perpetrated by what President Biden rightly called domestic terrorists and far-right extremists,” she said.

“We must restore trust in democracy, but it requires bold strokes – and a commitment to hold ourselves to the same standard that we impose on those opposite.”